‘Missed all the Bible verses’: Marco Rubio slammed for demanding ‘work requirement’ for parents to get child poverty check 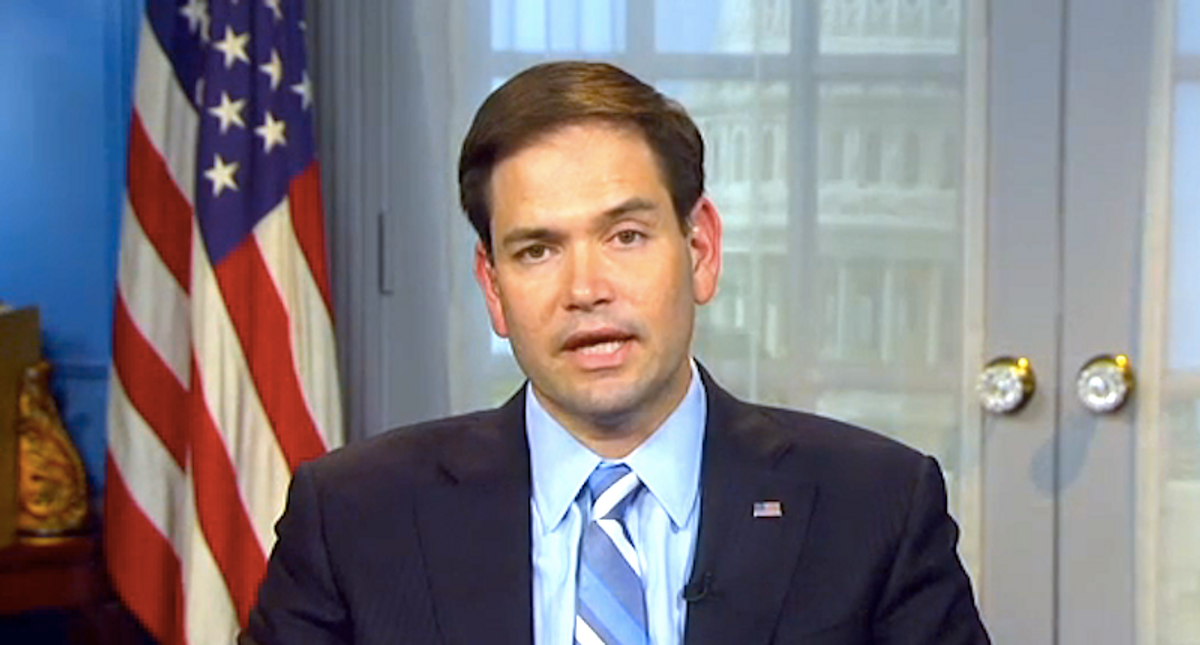 The LORD is close to the brokenhearted, saves those whose spirit is crushed Psalms 34:19
— Marco Rubio (@marcorubio) February 23, 2021

Hours earlier, on Monday night the Florida Republican Senator who is up for re-election next year voiced his displeasure with a proposal from Democrats to battle child poverty, a problem that has been exacerbated by the pandemic. Democrats want to expand the $2000 a year child tax credit, and then use those funds to send parents monthly checks of up to $300. It would be a big help for many Americans with children.

The Center for American Progress (CAP) last month reported nearly 11 million children in the United States are living in poverty. That's about one out of every seven kids.

Senator Rubio says the Democrats' proposal amounts to "welfare," a word that for some reason is toxic among Republicans even though it appears in the U.S. Constitution. He is also advancing the lie that Americans experiencing poverty are lazy and don't want to work, a true slap in the face given how his party's policies and efforts made the coronavirus pandemic incalculably worse.

Ignoring the pandemic and high rates of unemployment, Rubio says that the federal government should not be sending parents monthly checks – much of which already belongs to the parents via existing tax code – unless there is a "work requirement" attached.

Read this short but devastating analysis from CAP:

More than 4 in 10 children live in a household struggling to meet basic expenses, and between 7 million and 11 million children live in households in which they are unable to eat enough because of the cost. When the pandemic forced schools to shift to distanced and virtual learning, it worsened the barriers to quality education for low-income children4 and pushed their parents, particularly mothers, to choose between caregiving and employment. Without serious interventions, an economic recovery will leave low-income and marginalized people—and their children—behind. Already, some calculations are finding that the child poverty rate has increased dramatically since the onset of the coronavirus crisis.

Rubio is getting slammed on social media:

WTF is this supposed to mean: “Being pro-family means being pro-work"? Being pro-family means ensuring that children in the wealthiest country in the world don't lack basic shelter, food, healthcare, clothes, education, the opportunity to succeed is built on a social safety net.
— David Rothschild (@DavMicRot) February 23, 2021

Except the poorest people can't take advantage of tax credits like your already-wealthy friends can.
— Main Street Muse (@MainStreetMuse) February 23, 2021

We live in a country where super rich politicians give trillions in corporate welfare to super rich corporations from OUR tax dollars, but we're supposed to feel guilty about getting our own crumbs under the table? Fuck you Marco Rubio. https://t.co/o45IAnzR4o
— BrooklynDad_Defiant! (@mmpadellan) February 23, 2021

Everyone who is raising a child is working. https://t.co/WwHZ3DXlx4
— southpaw (@nycsouthpaw) February 23, 2021

Marco seems to have missed all the Bible verses about caring for children. https://t.co/IoT99SPv7z
— Molly Jong-Fast🏡 (@MollyJongFast) February 23, 2021

You left out the part where it's a pandemic, man. It's not welfare, it's base humanity. You know, like that Christ guy you're supposed to be a fan of?
— Joe Berkowitz (@JoeBerkowitz) February 23, 2021

Hey Marco does your wife work? No? Because you make six figures a year to shitpost and can support your family on a single income and still be in the 1%? Shut your mouth, then.
— Kendall Brown (@kendallybrown) February 23, 2021

Our Constitution literally commands to “provide the common defense and promote the general welfare" right next to each other. Rubio champions the $750B military budget, but condemns a potential $267B welfare budget to eliminate child poverty. Absurd hypocrisy. https://t.co/wjVEsNLViV
— Qasim Rashid, Esq. (@QasimRashid) February 23, 2021

Caring for kids is the most important work there is. Letting families suffer and forcing full-time workers onto food stamps while your donors underpay them and take in record profits is CORPORATE WELFARE- the real “welfare" we should be talking about. You ain't “pro-family". https://t.co/0hHLsFeZKW
— The Tennessee Holler (@TheTNHoller) February 23, 2021

"Are there no prisons?" said the Spirit, turning on him for the last time with his own words. "Are there no workhouses?" The bell struck twelve. https://t.co/n5SHIglHdK
— G. Willow Wilson (@GWillowWilson) February 23, 2021

With respect, if it's welfare to do unto your fellow man as you would have him do unto you; then welfare is a Christian duty. When we have hordes of Americans in desperate conditions, it becomes a public health menace. Other states care for their citizens through these shut downs pic.twitter.com/M9EJ9krNgo
— Sean Lawlor Nelson (@HornedPoet) February 23, 2021

You heard Marco! Stop paying these freeloading kids and put them to work! I've had enough of these babies just laying around. GET A JOB, KIDS!
— Steve Hofstetter (@SteveHofstetter) February 23, 2021