McConnell is being crystal clear. What don't Democrats get about 'no'? 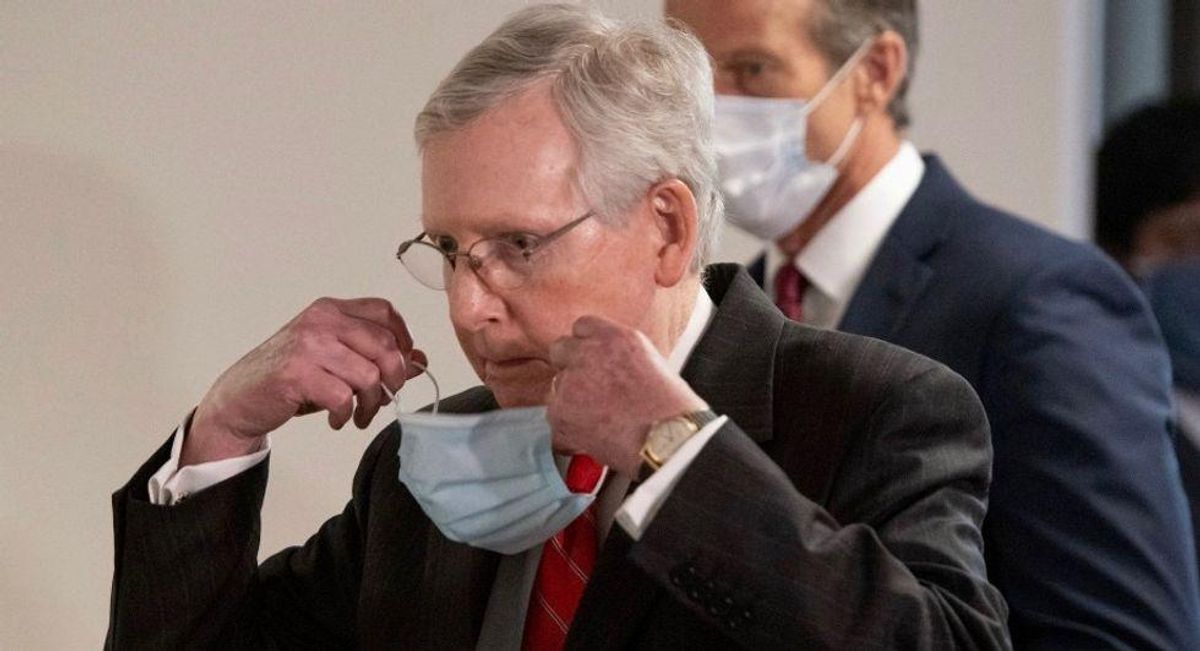 Democrats seem to be operating in two worlds at the same time: There's a real energy, driven by the base, to move ahead with bold plans, knowing that big majorities of Americans support them.

Then there's the lurch back to a mythical past, to seek "bipartisanship," implying compromise and not-so-bold plans.

Despite his history, President Biden seems to know the limits of the latter now. He and the administration continually describe bipartisanship as bringing in as many voters as possible of whatever party — rather than bowing to politicians in Washington from the obstructionist GOP — and talk about how voters support his agenda in big majorities.

And yet, we saw an almost sacred quest in recent weeks by Democrats in Congress to create a bipartisan commission to investigate the January 6th insurrection. I get that it was a worthy effort. But the way it was pursued just smacked of being stuck in the past.

The effort had Democrats bowing to Republicans in Congress just like the old days — think the Affordable Care Act — making concessions, giving them equal representation on the panel and veto power over subpoenas.

Rep.John Katko, a New York Republican in a vulnerable seat (especially after the coming redistricting in New York), managed to get Republicans enough power to impede the commission's work.

It was risky for Democrats, potentially creating a sham, since House Minority Leader Kevin McCarthy, doing Donald Trump's bidding and promoting the Big Lie, and Mitch McConnell, who's excused Trump while faking that he's not, would be choosing the Republicans who would be on the panel.

But just as in the past, even as Democrats caved Republican leaders said no, with McConnell putting the nail in the coffin by saying he opposed the commission, making the 60 votes necessary in the Senate likely unattainable. The GOP realizes any upside to the concessions were outweighed by the downside, which might be the implication of many of them in the January 6th actions if the commission actually did its job. As HuffPost succinctly put it in a headline, "GOP Lies Fueled The Capitol Riot. Of Course They Don't Want A Panel To Expose That."

The idea here was to have something like the 9/11 commission, which the George W. Bush administration quietly tried to stop or limit, but which ultimately was created. It exposed deep flaws in the FBI's and CIA's response, and highlighted the Bush administration's arrogance and its failures in handling of information. But while some have hyped the 9/11 commission as the gold standard, it wasn't all it was cracked up to be.

And even if one could claim that having a bipartisan commission did give the investigation and the findings more legitimacy with many Republicans and GOP-leaning independents almost two decades ago, that era is long gone. Today, any investigation of January 6th, whether by the Department of Justice, Congressional committees or by a a so-called independent commission would be labeled a "witch hunt" by Trump and rejected by every one of his supporters — which is the majority of the Republican Party.

There's no one on the fence who needs "bipartisanship" to be convinced about what happened on January 6th. And damning testimony is damning testimony, whether it's coming from a commission or from a House investigation. Everything that happened will be very public in televised hearings no matter what, further exposing the authoritarian grip of Trump, his incitement of those white supremacist groups that the led the insurrection and the Big Lie underlying it.

The Department of Justice, which Attorney General Merrick Garland has continually re-defined as it has been in the past — independent and not as a tool of the White House — can carry out a deep investigation, as can several Congressional committees.

Both the House and Senate should look at every aspect of the insurrection, via several committees, and call as many witnesses as possible — including subpoenas for Trump, Mike Pence, McCarthy — who spoke with Trump from inside the Capitol that day, pleading with him to stop the assault — and other Trump administration officials and GOP House members who helped organize the "Stop the Steal" event.

The most important lesson Democrats can learn from this is that McConnell actually isn't lying. He's being crystal clear: He said — in responding to a question two weeks ago about the purging of Liz Cheney from GOP leadership — he's not focusing on that but rather is focused "100 percent" on "stopping" Joe Biden and the Democrats from getting anything done.

What don't Democrats understand about the word "no"? Why were they still bending over backwards for a bipartisan commission when McConnell had said out loud that everything he's doing is to help the GOP — and that means taking orders from Trump — and not anything Biden and the Democrats are trying to do?

Republicans couldn't be making it easier for Democrats to act. The only answer is to end or reform the filibuster. And both the White House and Democrats in the Senate should be squeezing Senators Joe Manchin and Kyrsten Sinema, letting them know the ride will soon be over and they'll be out of power unless they act. If Democrats lose the Senate (and House) in 2022, American democracy heads further toward doom.

That is not an exaggeration by any stretch. And those two senators will be responsible. They should be pressured every single day by members of the caucus and by the White House.

If that were happening we would likely hear about it. Instead, the bipartisan dance continues — with only one partner — as the GOP makes clear its intent to thwart everything from immigration reform to voting rights legislation.

Even the much-heralded talks over a "bipartisan" infrastructure bill are falling apart — if they ever really were anything substantial to begin with.

The infrastructure bill could be passed via budget reconciliation with just 51 votes from Democrats, and there's been talk of including immigration reform in that bill if the parliamentarian will allow it — a big if. But most of the big ideas that Biden and the Democrats are promoting can't become law via budget reconciliation, and won't pass without the filibuster being fundamentally changed.

If McConnell's "100 percent" comment wasn't enough proof of that, his torpedoing the January 6th commission was a loud announcement that Democrats had better take "no" for an answer. And then do what they have to do.