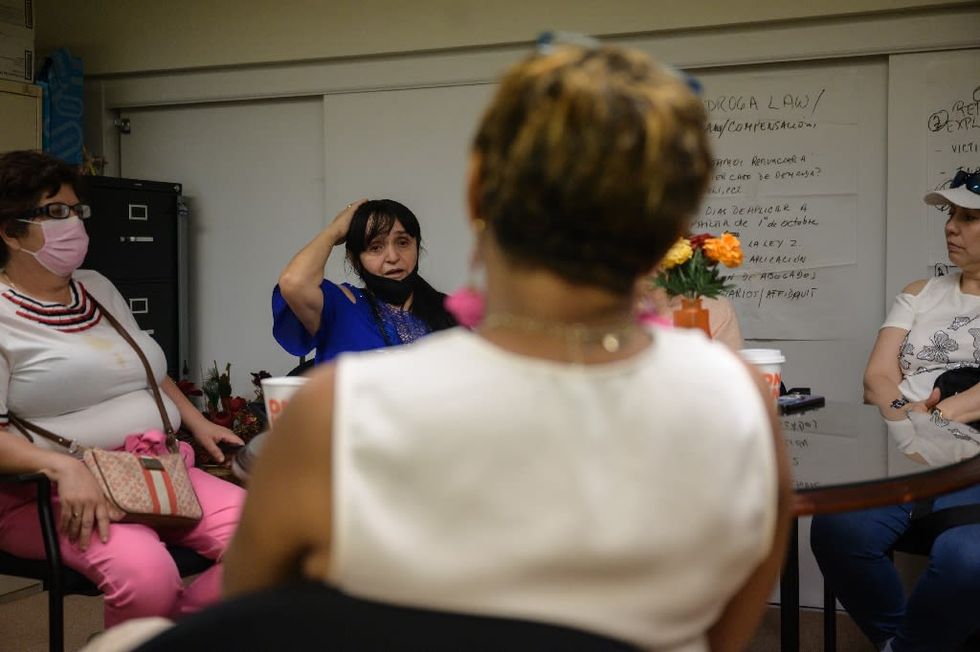 Lucelly Gil (center) at a support group for immigrants who helped clear rubble from the Twin Towers following the 9/11 attacks, in June 2021

New York (AFP) - Lucelly Gil is one of the forgotten victims of 9/11: an immigrant cleaner who spent months clearing up rubble from the World Trade Center and developed cancer apparently from the toxic dust, but who remains unrecognized.

At 7:00 am on September 15, 2001, the Colombian entered the immense ash cloud left by the collapse of the Twin Towers in New York. She would collect debris there for up to 12 hours a day, every day, for six months.

Twenty years later, the 65-year-old is still an undocumented migrant and lives with the consequences of that herculean effort: she is a breast cancer survivor, a common illness for women who worked at the site, has lost movement in one arm and suffers depression.

For eight months after the attacks, tens of thousands of people -- many of them immigrants -- cleaned Ground Zero and nearby damaged buildings.

They removed 1.8 million tons of rubble from the area and were paid between $7.50 and $10 an hour, just above the minimum wage at the time.

They didn't know it then but the exposure to asbestos and other toxic materials brought the risk of cancer, asbestosis and a host of respiratory illnesses, as well as post-traumatic stress, anxiety and depression.

"I don't like to remember Ground Zero anniversaries," Gil said tearfully at a recent session of the 9/11 Latino cleaners support group Fronteras de Esperanza, or Borders of Hope, which still meets two decades on.

She remembers that after working so many hours, sometimes finding human remains, she would go home and thought she was still cleaning.

"I almost freaked out," Gil recalled.

Gil, like all the cleaners spoken to by AFP, cannot work because of illnesses believed to be derived from the 9/11 operation. They dream of becoming legal residents so they can receive benefits and live without the threat of deportation.

In 2017, a then-Democratic representative from New York even introduced a bill regarding this but it was never debated in Congress.

"That the people who cleaned do not have papers is an injustice because they lost the most precious thing, which is health," Rubiela Arias, another cleaner, told AFP in the modest room she rents in Queens with the help of her son.

The now 57-year-old Colombian has been fighting for years for the Hispanic cleaners to be legally recognized.

She herself was at the site and has since suffered from various respiratory and stomach illnesses, as well as post-traumatic stress disorder and other mental ailments.

More than 2,000 cleaners, rescuers and police officers died from illnesses linked to 9/11, according to the federal victims' compensation fund.

Many undocumented cleaners, including some who were ill, have been deported in recent years, according to social worker Rosa Bramble, who has led Fronteras de Esperanza on a voluntary basis since 2010 from her office in Queens.

Others returned to their countries to die, because they were sick and could not work to support themselves.

"Here they couldn't pay rent," said Bramble, a professor at Columbia University and who is of Venezuelan origin.

Most of the 9/11 cleaners have full medical coverage through the World Trade Center's federal health program, but many have not received compensation for their illnesses.

That is the experience of Franklin, a 50-year-old undocumented Peruvian cleaner with various respiratory ailments who decided to return from New York to Lima in 2019 to say goodbye to his ill mother, whom he had not seen for two decades.

When he tried to return to the United States to take up the medical treatment guaranteed by the WTC health program in which he had been accepted -- and to claim financial compensation -- the US embassy in Lima denied him a visa.

In June he twice tried to cross the border between Mexico and the United States illegally with the help of traffickers, but was deported to Mexico both times.

"I practically gave my life to clean Ground Zero and I don't think it is fair that they are repaying me this way," he told AFP by phone from Juarez city where the traffickers kept him before his third attempt, which was successful.

Some workers who sued New York City and the companies that employed them were able to get compensation. Additionally, in 2011, Congress approved maximum payments of $250,000 for a cancer linked to 9/11.

"We as Latinos were discriminated against in relation to the other workers on 9/11," she said.

Rosa Duque, a 56-year-old Guatemalan cleaner who has difficulty breathing, says the cleaners are "in oblivion" and must be given permanent residency.

"When we volunteered to go to work they didn't ask, 'Are you a citizen?' 'Are you a resident?'" she said.