'Racist much Mike?': Huckabee slammed for anti-Asian and anti-Trans tweet amid rise in violent hate crimes 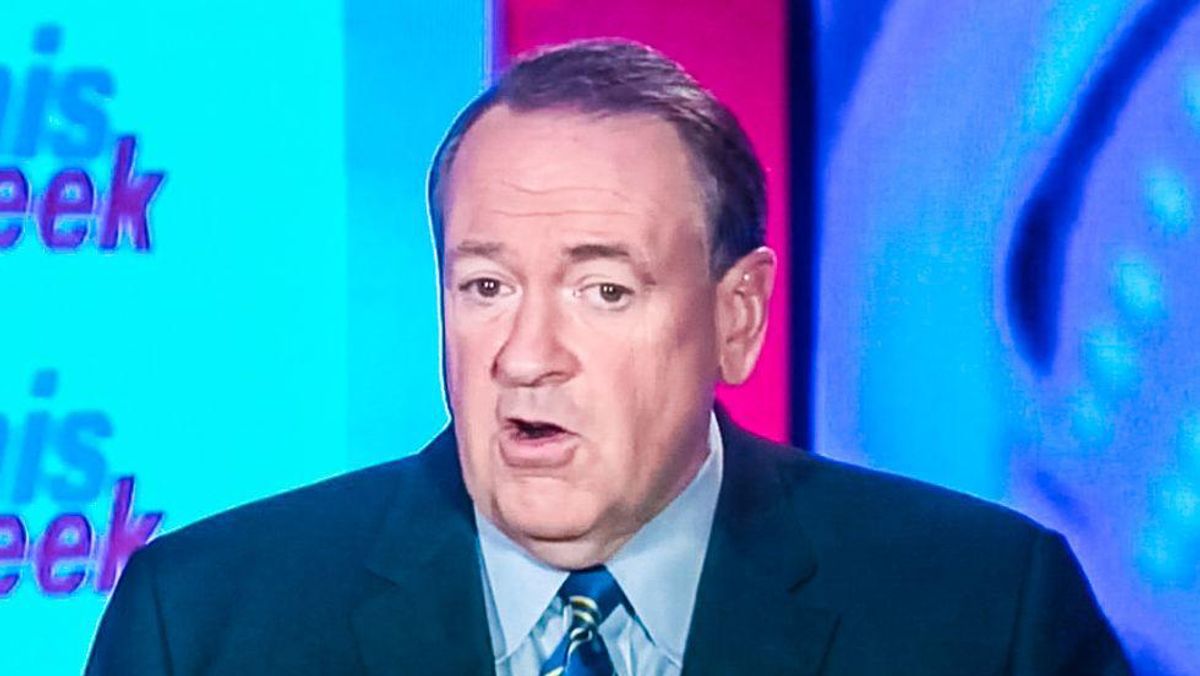 Amid near-daily reports of horrific hate crimes against Asian Americans and transgender Americans, Mike Huckabee is under massive criticism for posting a hateful, racist, anti-Asian, transphobic tweet that's also anti-democracy, amid a rise in vicious and violent hate crimes.

Huckabee is the host of “Huckabee" on the Trinity Broadcasting Network (TBN), and is the father of Arkansas GOP gubernatorial candidate Sarah Huckabee Sanders, the former Trump White House press secretary. For decades Huckabee has played the part of a conservative Christian, using his faith as a sword and a shield.

“I've decided to 'identify' as Chinese," Huckabee tweeted Saturday. “Coke will like me, Delta will agree with my 'values' and I'll probably get shoes from Nike & tickets to @MLB games. Ain't America great?" he asked, mocking the millions of Americans furious about Georgia Republican Governor Brian Kemp signing the nation's worst voter suppression bill into law. On Friday Major League Baseball pulled the All-Star Game out of Atlanta and hundreds of corporations and organizations have denounced the legislation designed to make voting even more difficult, especially for the state's Black and low-income voters.

Huckabee, an ordained Baptist minister who ran for the Republican Party's presidential nomination but failed twice, is the former Arkansas governor. He has a long history of attacking minorities, especially LGBTQ people.

Many across the nation reacted in horror when video of a New York City man attacking a 65-year old Asian American woman in a hate crime, including repeatedly kicking her in the stomach, causing her to fall to the ground, then stomping her head multiple times, went viral last week. Just weeks ago a gunman massacred eight people at a Asian spa in Atlanta. Six of the eight murdered were Asian American.

Huckabee's attack comes on Holy Saturday, just one day before Easter, a highly important holiday for people around the world of the Christian faith who celebrate what they believe is Christ's resurrection.

This is far from the first time Huckabee has been accused of racism.

“2020 was the deadliest year for the transgender community," according to ABC Tampa.

“There were 122 incidents of anti-Asian American hate crimes in 16 of the country's most populous cities in 2020, an increase of almost 150%," Voice of America reports.

On social media many expressed their outrage in response to Huckabee's tweet:

WHOA.
Racist, much, Mike?
The Evangelical Christians are OUT OF CONTROL with hate.
You lead the way.
— K. Sennholz MD (@MtnMD) April 3, 2021


Wow is this appalling.
Six Asian American women were massacred on March 16. Last weekend, an Asian woman your age was beaten and kicked in NYC and is still in hospital with broken bones and a concussion. Every day Asian/AAPI people are victimized by hate crimes. Delete this.
— Victoria Brownworth (@VABVOX) April 3, 2021

Really appreciate the Christian witness, Mike.
Look forward to watching you explain your politics and tweets like this (= opposit of the good Samaritan or anyone's definition of Christlike) on judgment day. Should be good.
— Jinx in TN (@grrenshaw) April 4, 2021

Mike Huckabee is a racist and he should be banned from all social media. He canceled himself with his hate.
— Scott Dworkin (@funder) April 3, 2021

Hey Mike Huckabee, I asked around and Coke likes me, Delta agrees with my values, I wear Nikes and my hometown Dodgers won the World Series.
But it's not because of my ethnicity. It's because I'm not a sh*thead like you who is adding fuel to anti-Asian hate. #StopAAPIHate https://t.co/Zs9spYu9GL
— Ted Lieu (@tedlieu) April 4, 2021

Mike, I've shared a meal with you at your beautiful table. I've heard you profess Christ as Lord. This is entirely antithetical to the gospel.
— Beth Moore (@BethMooreLPM) April 4, 2021

Mike Huckabee motivated me to do this work. The day of the Sandy Hook shooting he inexplicably used the murder of children to spread a cancerous religion. It made me realize as a pastor that I needed to explicitly oppose monsters like him who bastardize my faith tradition.
— John Pavlovitz (@johnpavlovitz) April 4, 2021

I reported it to Twitter. Don't know if that will help, but they should make him take this racist tweet down.
— Wear a Mask, Social Distance, & Wash Your Hands! (@music_fan2020) April 4, 2021

Well, you just identified yourself as a flaming racist. And not for the first time. As a direct result of racists like yourself, I have to report stories of mass brutality against Asians/AAPI people like this one. #StopAsianHate https://t.co/IeZ0gNQ8N0
— Victoria Brownworth (@VABVOX) April 3, 2021

Mike Huckabee has been warned MANY times before, but he refuses to quit targeting protected groups with dehumanizing language.
Mike just deletes the bile and nothing ever happens.
How many chances does this guy get? @delbius @jack @TwitterSupport @TwitterSafety #StopAsianHate pic.twitter.com/hHgxtLZhAx
— 🏝 Your Friend Kim (@kim) April 4, 2021