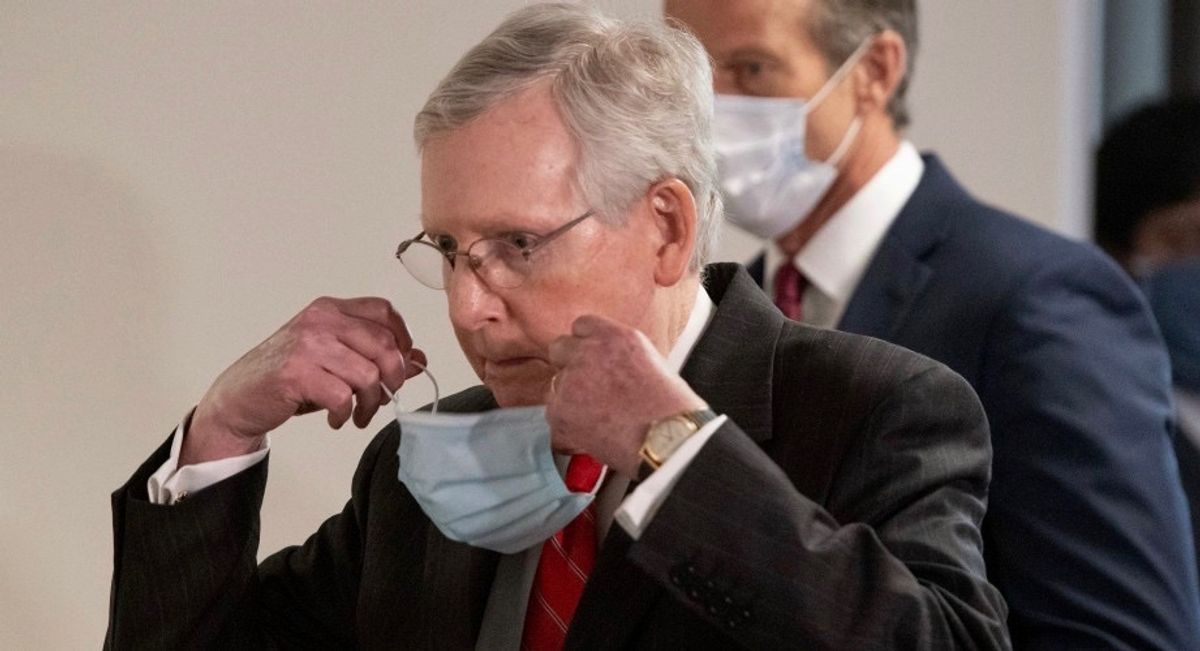 Just like he did with the Covid rescue bill a few months ago, Senate Minority Leader Mitch McConnell just said that there will not be one single Republican vote in support of President Joe Biden's infrastructure plan.

Why would McConnell do this?

Why would he give away any bargaining leverage the GOP might have?

Why would he essentially encourage Democrats to make the legislation as expansive, effective and popular as possible? And then let them get all the credit for it?

That simple reality has been noted by a number of commentators.

But nobody is asking the bigger question: "Why would a professional, lifelong politician and master tactician like Mitch McConnell make such a huge mistake?"

I believe he has completely deluded himself. He has bought his own BS. And it won't be the first time senior Republican leadership has done this and then destroyed the GOP in the process.

This is a guy, after all, who spent decades proclaiming Reaganomics and supply-side economics.

He's probably asserted a thousand times that when taxes on rich people are cut and government spending goes down, good things will happen to the American economy. He's repeatedly assured his voters that when unions are destroyed the working class prospers.

He's embraced and endorsed 40 years of de-funding and ignoring America's infrastructure, even to the point of frustrating Trump's own infrastructure plan attempts. Over and over again, when proposed by Clinton and Obama, McConnell has suggested that rebuilding our country at the expense of taxing rich people would create an economic disaster.

For most Americans, forty years of experience with these theories that McConnell's been promoting have proven that they're largely crackpot BS. They're fantasies sold to the American public by billionaires and the think-tanks they fund, amplified by right-wing radio and media, to keep the billionaire's taxes down, their companies deregulated and unions out of their workplaces.

But they've been sold so aggressively — from the efforts in the 1950s, 1960s and 1970s by people like Hayek, von Misis and Milton Friedman, to Ronald Reagan and the institutional Republican party from 1980 to this day — that many Republicans actually do believe them.

And McConnell's is not alone in this belief, even among significant Republican figures.

I regularly invite conservatives on my radio/TV program to defend propositions like those above, and there are several who I've come to know personally, and I know for a fact, that they actually believe these things.

Reaganomics hasn't worked out, they say, because it hasn't really been tried.

There's been too much government spending clouding things. Taxes have never really been low enough. There's never been a true libertarian experiment in America.

If we want to see if these theories actually work, they say, first we have to do away with Social Security, Medicare, unemployment insurance, food stamps, public schools, public health departments and the whole plethora of government-supported institutions. Those things, they say, have so muddled up and distorted our economic systems that partial measures like partial deregulation and occasional tax cuts promoted by Republicans over the last 40 years haven't had the success that they could have had in a "pure free-market economy."

These people, who I know personally, are not saying what they're saying because their paychecks depend upon it (although that is true of a few others that I know and have met in the media). They're saying it because they believe it.

They studied it in college from Econ professors whose chairs were funded by right-wing billionaires and conservative foundations. They've read it over and over again in conservative books and magazines, and on conservative websites. They've been hearing it preached from the highest towers of conservatism their entire lives.

If Mitch McConnell is at all like them, he believes it's true, too. He believes that rebuilding America using tax dollars from people earning over $400,000 a year will produce a disaster. He's internalized that message.

Another clue that Mitch McConnell and many of his Republican colleagues actually believe this stuff was revealed at last weekend's Utah Republican party meeting, where Mitt Romney was booed.

It's another sign that the ideology has taken deep hold and spread in the party. It's become more important than the good of the party itself, as happened in 1964.

If Mitch McConnell is a true believer, he may well be in the "true believer mold" of Barry Goldwater.

If so, this is the second time this has happened in the Republican party in my lifetime. And it may presage the exact same kind of disaster that Barry Goldwater brought down upon the party in 1964.

I was only 13 at the time, but I remember watching the 1964 Republican convention with my dad when Nelson Rockefeller got up and gave a speech calling for moderation, compromise and a commitment to do what was best for the nation.

Referring to Goldwater and the right-wing true-believers who followed him, much like Mitt Romney referred to Trump and MAGAs, Rockefeller said, "These extremists feed off fear, hate and terror. They encourage disunity." He was booed off the stage, as you can see in this short clip.

Then Barry Goldwater stepped up to the microphone and loudly proclaimed:

"I would remind you that extremism in the defense of liberty is no vice! And let me remind you also that moderation in the pursuit of justice is no virtue!!"

He brought down the house. The standing ovation lasted for minutes. They really believed him.

Prior to Goldwater's 1964 candidacy, the Republican party of Dwight Eisenhower had been a pretty moderate place (including VP Nixon's 1960 race against JFK).

Eisenhower advocated unionization and bragged about how many new union members had joined during his presidency. In 1956, when he ran for reelection, he highlighted how he'd helped increase the number of people on Social Security.

In his farewell address he prayed — literally prayed (14:55 on the recording) — for world peace, in the same speech he used to warn us about the Military-Industrial Complex.

But then the True Believers took over the GOP — to this day.

Goldwater went on to lose to LBJ in a massive landslide, and McConnell may well be leading his own party in a very similar direction.

Goldwater believed what he was saying. I've read both his autobiographies and there's no doubt in my mind.

I can't say that I am as much of a student of Mitch McConnell as I was of Barry Goldwater back in 1964 when, along with my dad, I went door to door for him in that presidential campaign.

But the first possible and most rational explanation for Mitch McConnell openly stating in advance that there will not be a single Republican vote for Biden's plan is that McConnell thinks if Biden's plan passes it will create a disaster.

He thinks that inflation will spike, the national debt will lead to some terrible national default, and/or the stock market along with the entire economy will go in the tank.

After all, that's what he's been preaching for 40 years. How hard is it to imagine that he's come to believe his own sales pitch?

Sadly, for Mitch, all the empirical evidence indicates that his belief is just as misplaced as were Goldwater's fears of communists in the State Department and the viability of using nuclear weapons in Vietnam.

The Republican party tried a very similar shtick back in 1920, when Warren Harding was elected President on a platform of dropping the 91% top tax rate down to 25%, deregulating industry and privatizing most government functions. He won that election, and kept those promises.

It led to the "Roaring Twenties" — a time when the very rich got very much richer and working people got screwed — and then straight to the stock market crash of 1929 and what was called for a generation the "Republican Great Depression."

Perhaps McConnell doesn't know the history. Perhaps he thinks that era was an anomaly, or an incomplete experiment, or there were other factors that caused the crash.

Or, if you've read this far, there's one other possibility worth considering. Perhaps McConnell's trying to implode the party to purge it of Trump.

It's pretty far out, but maybe he's letting folks trash Romney and Cheney and the rational few left in the party so it'll fall so low in the 2022 election that Trump will be discredited and purged from the party himself.

That possibility, though, is a stretch. It still appears that the only reasonable explanation for Mitch McConnell refusing in advance to go along with anything Biden is proposing that might help America is that he truly believes that, at the end of the day, Biden's plans will be a disaster and he wants to have no part of them.

He's wrong, but — in either case — he's certainly not lacking in conviction.