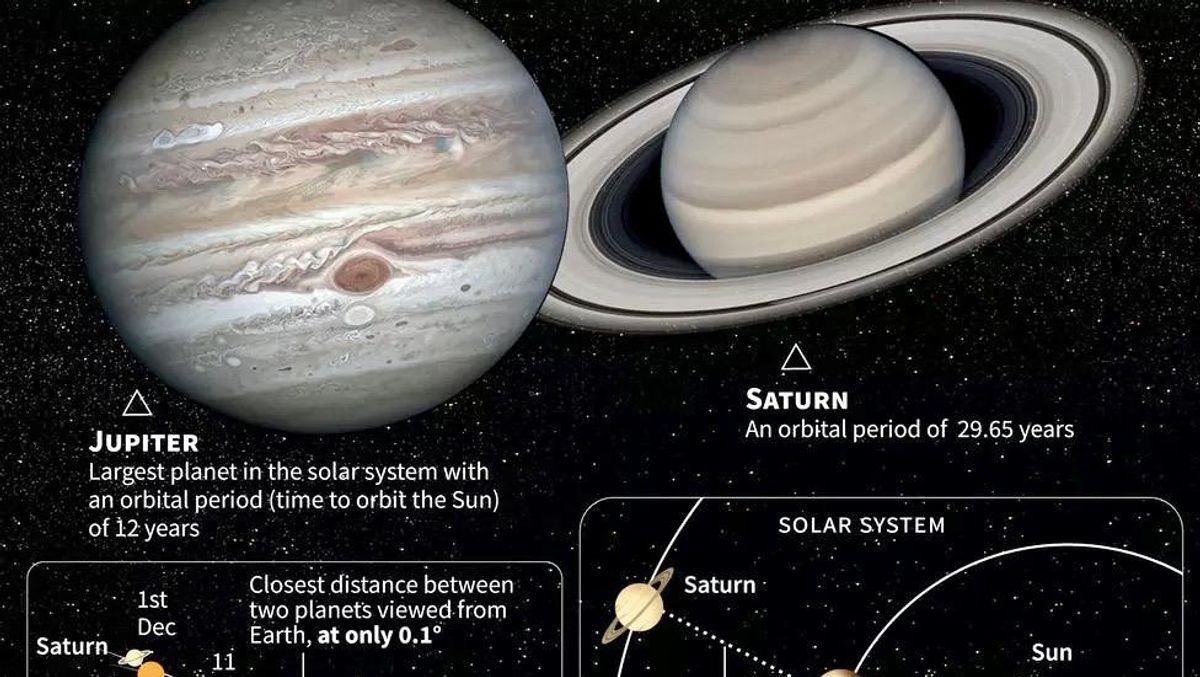 The solar system's two biggest planets, Jupiter and Saturn, are set to come within planetary kissing range in Monday's evening sky, an intimacy that will not occur again until 2080.

This "great conjunction", as it is known to astronomers, occurs fortuitously on the winter solstice for those in the Northern Hemisphere, and the beginning of summer in the global south.

The two planets will, in fact, be more than 730 million kilometres (400 million miles) apart.

But because of their alignment in relation to Earth, they will appear to be closer to each other than at any time in almost 400 years.

Optimal "conjunction" is set to take place at 1822 GMT.

Looking with a telescope or even a good pair of binoculars, the two gas giants will be separated by no more than a fifth of the diameter of a full moon.

With the naked eye, they will merge into a "highly luminous" double planet, said Florent Deleflie from the Paris Observatory.

The last time Jupiter and Saturn nuzzled up this close was in 1623, but weather conditions in regions where the reunion could be seen blocked the view.

Visibility was apparently better the time before that during the Middle Ages, on March 4, 1226 to be precise.

The best viewing conditions on Monday will be in clear skies and close to the Equator.

People in Western Europe and along a vast swathe of Africa will have to train their sight to the southwest.

"The Grand Conjunction refers to the period when two planets have relatively similar positions in relation to Earth," said Deleflie.

Jupiter, which is the larger planet, takes 12 years to revolve around the sun, while Saturn takes 29 years.

Every 20 years or so, they appear to observers on Earth to come closer to each other.

"With a small instrument -- even a small pair of binoculars -- people can see Jupiter's equatorial bands and its main satellites and Saturn's rings," Deleflie said.