Musicians hungry to perform make a Manhattan storefront their stage 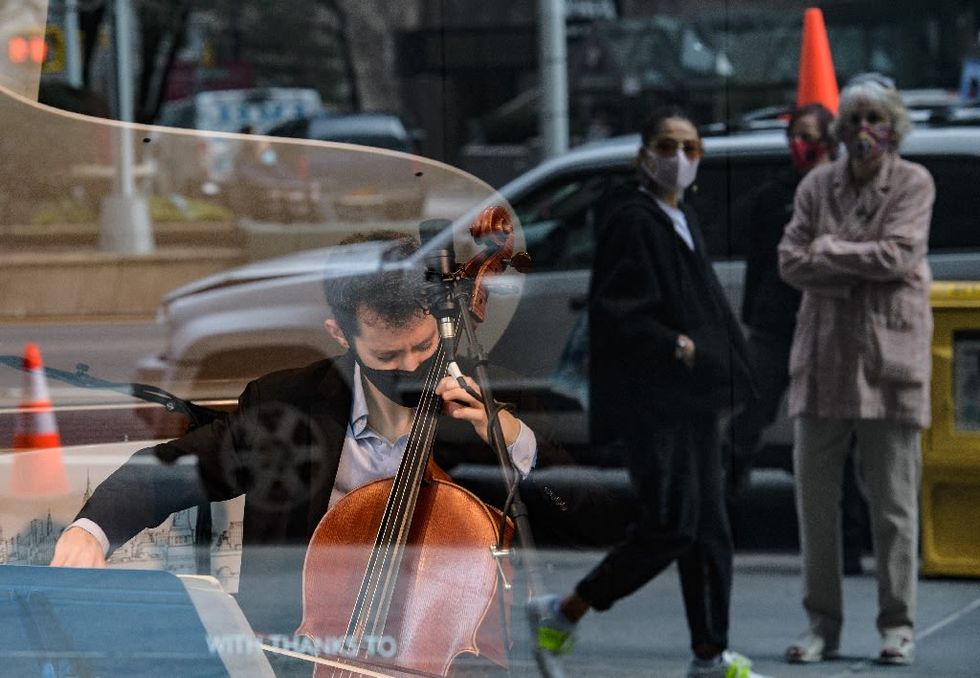 Musicians Michael Katz, on cello, and pianist Spencer Myer perform at a storefront series highlighting musicians after a devastating year for entertainment

New York (AFP) - After a year that saw concert venues go dark and stages moved online, an empty storefront in New York has offered a glimmer of hope to artists and audiences ravenous for live music.

Musicians across the genres are performing pop-up concerts on Manhattan's Upper West Side for lucky passersby: on a recent morning it was Beethoven and Debussy that harmonized with a city soundscape normally dominated by car horns, construction work and pigeon coos.

It marked the first time Michael Katz, a cellist, was able to play with piano accompaniment in a year; Spencer Myer performed on a white Steinway in an experience he said musicians worldwide have been "starved for."

Perhaps more importantly, the "Musical Storefronts" shows provide an opportunity to interact with an audience, even if they're watching through a window from the sidewalk instead of seated in any number of the city's storied halls.

"It's really a reciprocal relationship that we need," Katz said. "Being able to bring the music to people like we did today is really something unique and special."

The location of performances isn't broadcast -- organizers don't want large crowds gathering for social-distancing reasons -- but the series, which began in late winter, will run through the spring, offering ample opportunity to catch a show.

Runners with dogs, parents pushing strollers and elder New Yorkers out for afternoon walks were among the audience members who stopped by for the recent program that also included Mendelssohn and Boulanger.

"We're trying to have some of everything... from classical musicians to people from Broadway, jazz; we've had experimental improvisers," said Kate Sheeran, who directs the Kaufman Music Center behind the series.

Along with entertainment, the project aims "to really showcase the artistic engine of New York City, and shed light on the fact that artists need work, and this issue needs attention."

The rapid spread of Covid-19 first gripped the largest US city more than a year ago, leaving more than 30,000 residents dead and crippling the livelihoods of many more.

Musicians were among those hard-hit, reduced to virtual performances and online lessons as the viral spread grounded tours and closed venues -- some forever.

"Our industry has been really devastated, and especially performing artists; lives have been impacted severely," Sheeran told AFP.

"We hope that this sheds a light on that, in addition to providing joy for both the artists and the audience."

A few months after New York's vaccination campaign kicked off, more than a third of adults have received at least one dose -- and there's hope in the air for musicians eager to get back onstage.

"One of the lessons from the pandemic is just how much people just hunger for and need music and theater and dance and any sort of live art that you can encounter personally," Katz said.

For Terry Lieberman, who stopped by to soak in the classical show, the series is a balm as the pandemic slogs on -- and a testament to New York's resilience.

"New York is always like that -- they always improvise when something bad happens," Lieberman said from behind her floral mask.

"They always rally, and they come back, and this is just wonderful."