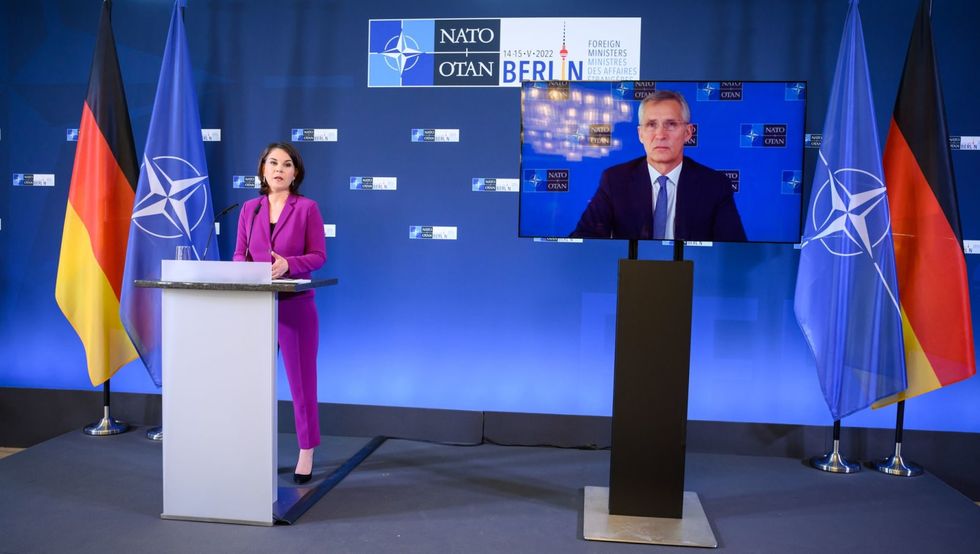 German Foreign Minister Annalena Baerbock speaks during a press conference at the end of the NATO Foreign Ministers meeting at the Federal Foreign Office in Berlin. Bernd von Jutrczenka/dpa

Turkey has said it will only agree to Finland and Sweden joining NATO if certain conditions are met, potentially threatening the defence alliance's show of unity in its dealings with Russia.

Turkey called on its NATO allies to support its fight against the banned Kurdish Workers' Party PKK and the Kurdish YPG militia in Syria during a meeting of NATO foreign ministers in Berlin on Sunday, while also slamming several member states for restricting weapons exports to Turkey due to its fight against these same groups.

Foreign Minister Mevlüt Cavusoglu said that Turkish public opinion was against admitting Sweden and Finland to NATO, adding that "they are calling on us to block it."

On Saturday, Cavusoglu voiced Turkish objections to the accession of the two countries, equating Finland and Sweden's granting of asylum to various Kurdish exiles with supporting "terrorist organizations."

Turkey's demands for NATO support come as Finland's president and prime minister announced that the country would officially apply for NATO membership on Sunday. Sweden is expected to announce its decision to join the alliance in the coming days.

Other NATO states have welcomed the fact that Finland and Sweden, both long neutral, now appear to be readying themselves for membership as fears grow for European security amid Russia's ongoing war on Ukraine.

German Foreign Minister Annalena Baerbock said on Sunday that NATO would be strengthened by having Finland and Sweden as members, both as a defence alliance, but also as an alliance of values.

She also voiced her support for an expedited membership process and cautioned against the process taking too long at this "special, truly historic moment for these states."

Finland and Sweden are both already close NATO partners but have never been official members of the alliance.

At the start of the meeting, Baerbock called for the strengthening of NATO in military and political terms. "Our unity remains our greatest strength," she said.

It was not clear how Turkey might be dissuaded from vetoing Finnish and Swedish accession to NATO, however.