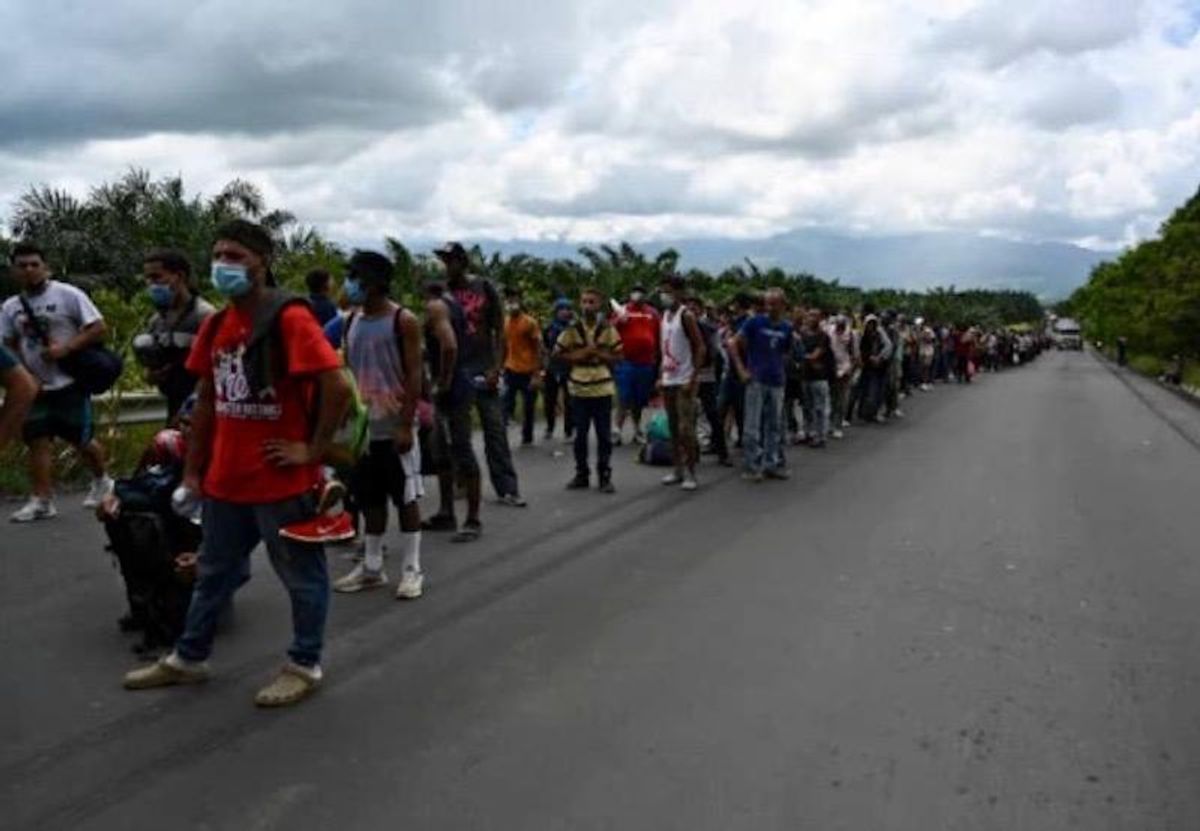 More than a dozen migrant caravans, like this one pictured in October 2020, have set off from Honduras in the last two years(AFP)

Hundreds of asylum seekers are forming new migrant caravans in Honduras in Central America, planning to walk thousands of kilometers to the United States via Guatemala and Mexico, in search of a better life under the new administration of President Joe Biden.

A first group of some 300 people set out at dawn on Thursday from San Pedro Sula, the second-largest city in Honduras, headed for Corinto, on the border with Guatemala, some 100 kilometers (62 miles) northwest.

Traveling in small groups, some bearing the Honduran flag, most of the traveling migrants wore coronavirus protective face masks.

According to social media pages, another 3,000 people are to meet at San Pedro Sula on Thursday evening to leave in the small hours for Corinto or Agua Caliente elsewhere on the border, some 260 km away.

The migrants say they are fleeing poverty, unemployment, gang and drug violence, as well as the aftermath of two violent hurricanes that hit the country last November.

But in a message to the group, Mark Morgan, acting Commissioner of the US Customs and Border Protection warned them not to "waste your time and money".

"The dangerous journey both puts you in harm's way and endangers the lives and health of those in the US and regional countries through the potential spread of Covid-19," he said in a statement last week.

The US commitment to the "rule of law and public health" is not affected by a change in the administration, he stressed, and migrant caravans will not be allowed to make their way north in violation of national sovereignty and immigration laws.

"This is a deadly journey -– the US Border Patrol recovered more than 250 bodies along the US-Mexico border last fiscal year. We saw two deaths just last week, when smugglers abandoned dozens of migrants in a winter storm that dumped two feet of snow near Big Bend, Texas," added Morgan.

More than a dozen migrant caravans have set off from Honduras since October 2018 -- at least four of them with 3,000 people each. But all have run up against thousands of US border guards and soldiers positioned on Mexico's southern border by the President Donald Trump's administration.

Guatemala, Mexico and Honduras have an agreement with the United States to stop north-bound migratory flows from the south of the continent.

Guatemala on Thursday declared seven departments in a state of "prevention" as the amassing continued.

The decree, published in the government gazette, cited concern for the "safety of the inhabitants" of departments through which the caravan would transit, and gave security forces the authority to "forcibly dissolve any type of public meeting or demonstration" held without authorization.

Biden has promised "a fair and humane immigration system" and pledged aid to tackle the root causes of poverty and violence that drive Central Americans to America.

Trump, on the other hand, froze a $750-million aid package agreed by his predecessor Barack Obama -- whose vice president was Biden.

The outgoing, twice-impeached president has characterized immigrants from Mexico as "rapists" who were "bringing drugs" and other criminal activity with them to the United States.

Guatemala's government has warned that anyone wanting to pass through its territory must show a negative coronavirus test and have their papers in order.

Mexico's consulate in San Pedro Sula, from where caravans usually leave, warned that its government "does not encourage and will not allow the illegal entry of caravans."