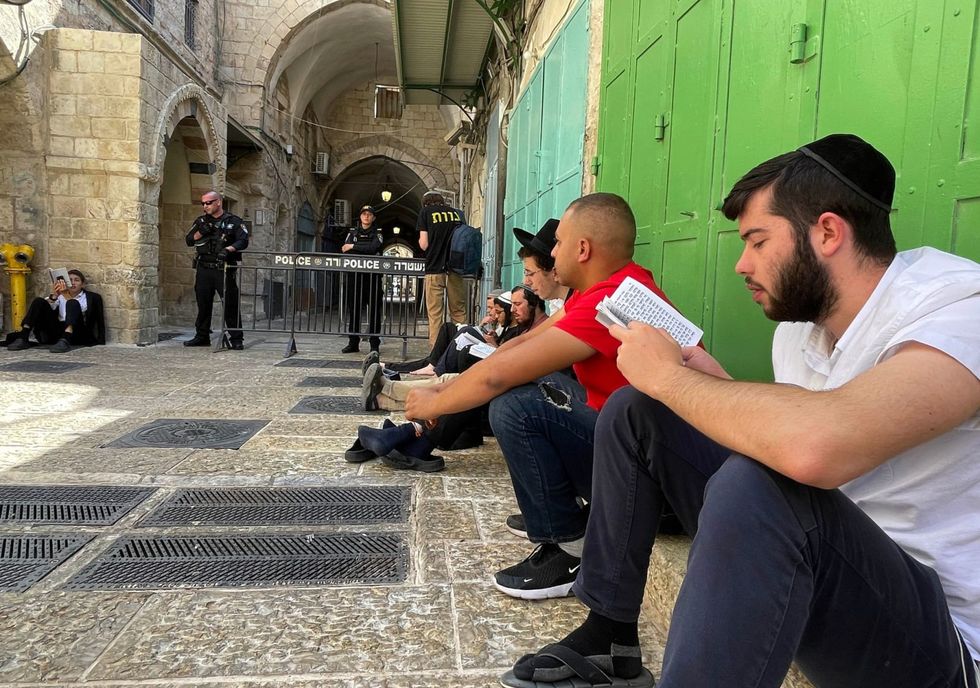 Tisha B'Av fasting and memorial day in Jerusalem - A group of ultra-Orthodox Jewish men pray in the Old City of Jerusalem near the entrance to the al-Aqsa mosque compound. Israeli security forces stand guard at a closure during the annual Tisha B'Av fasting and memorial day, commemorating the destruction of both Solomon's Temple by the Neo-Babylonian Empire and the Second Temple by the Roman Empire in Jerusalem. - Baraah Abo Ramouz/APA Images via ZUMA Press Wire/dpa

There were renewed confrontations on Sunday at a Jerusalem holy site, known to Jews as the Temple Mount and to Muslims as al-Haram al-Sharif, the Noble Sanctuary.

On the Jewish fasting and mourning feast of Tisha B'Av, young Muslims threw stones at police officers on the compound, according to police reports. According to media reports, they were protesting against the visit of hundreds of Jews to the Temple Mount.

The site with the Dome of the Rock and the al-Aqsa Mosque is the third holiest site in Islam. But it is also sacred to Jews because two Jewish temples used to stand there.

The site is under Muslim administration, while Israel is responsible for security.

The Muslim festival Eid al-Adha also falls in this week.

According to an agreement with the Muslim authorities, Jews are allowed to visit the site, but not to pray there. However, Israeli television reported on Saturday that Israel had tacitly allowed Jews to pray at the holy site in recent months - a violation of the status quo. Palestinians regard visits by Jews as a provocation.

Hamas, which controls the Gaza Strip, had called on Palestinians to "march back to Jerusalem" and protect the Noble Sanctuary before the holiday.

Tensions at the site helped trigger a conflict earlier this year between Israel and the Palestinians in the Gaza Strip.

On May 10, Hamas fired rockets at Jerusalem, describing the attack at the time as a reaction to Israel's actions on the Temple Mount and in the Jerusalem neighbourhood of Sheikh Jarrah, where Israel has forced the eviction of residents.

The Islamist group, classified as a terrorist organization by the EU, the US and Israel, had threatened new attacks in the event of new "violations" by Israel.

During the last conflict between Israel and Palestinian militant organizations, 255 people were killed in the Gaza Strip in May. In Israel, 13 people died as a result.

Israel had conquered the Arab-majority eastern part of Jerusalem in 1967. The Palestinians see it as the future capital, while Israel claims all of Jerusalem as its capital.