New COVID wave could be another Trump-caused massacre 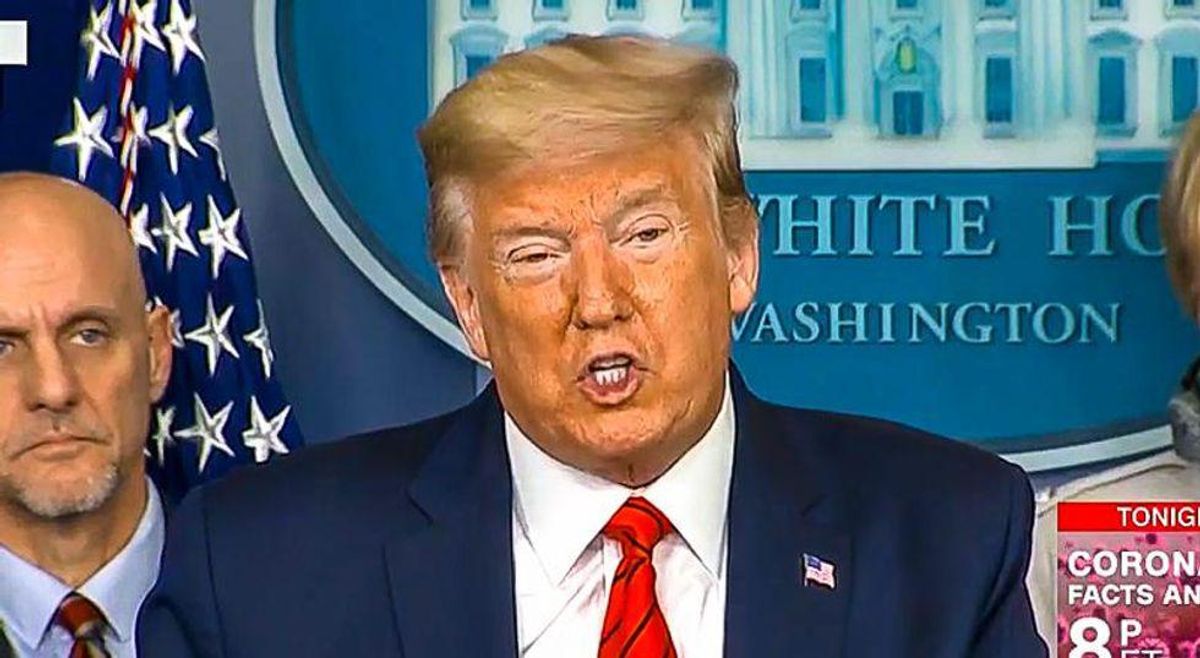 J. R. R. Tolkien wrote, "The burned hand teaches best. After that, advice about fire goes to the heart." It's a painful truth that people in red states, and red counties in blue and purple states, are about to learn.

While multimillionaire well-vaccinated Fox "News" hosts continue to sow doubt about masks and Covid vaccines to jack up the billions in revenue the channel brings in every year for the Murdoch family, the CEO of a hospital chain in Missouri is begging them to tell the truth.

"The Delta variant is in the Ozarks," tweeted Steve Edwards, CEO of hospital chain Cox Health in Missouri. "We have been interviewed by NPR, CBS News, MSNBC, AP, Today Show, Good Morning America, CNN, NYTimes but not @FoxNews."

This is a crisis now for Missouri because the Delta variant of the Covid virus is not only far more contagious than previous strains, but also more deadly. As Heather Hollingsworth writing for the AP notes, vaccination rates are very, very low in that state with one county clocking in at 13% and most counties "well short of 40%."

People in red counties across America are reporting on social media the same thing Louise and I saw when we visited a rural town in Oregon last weekend: nobody's wearing masks or practicing social distancing. They believe rightwing media's lies that Covid's "just like the flu" or "vaccines are experimental" or "it's all a Democrat hoax." They're following Trump's notion that masks make men look "weak."

As a result of this, Eric Frederick, the chief administrative officer of Mercy Hospital in Springfield, Missouri, tells the AP that they have been "inundated with COVID-19 patients as the variant first identified in India rips through the largely non-immunized community."

And it's not just hitting the elderly. "These patients are also younger," Hollingsworth writes, "than earlier in the pandemic — 60% to 65% of those in the ICU over the weekend at Mercy were under 40, according to Frederick, who noted that younger adults are much less likely to be vaccinated — and some are pregnant."

When the Covid virus first showed up in the United States in January of last year, then-president Donald Trump quietly told reporter Bob Woodward that it was both deadly and airborne.

"This is deadly stuff," Trump told Woodward on February 7th, 2020. "You just breathe the air and that's how it's passed And so that's a very tricky one. That's a very delicate one. It's also more deadly than even your strenuous flu."

That's not, of course, what Trump and his lackeys told the American people, as they set up the deaths of over 600,000 Americans with more to come this year. "I wanted to always play it down," Trump told Woodward a month later. "I still like playing it down…"

It's a mantra Trump carried on right through his last weeks in office when he got himself and his wife secretly vaccinated in the White House, and, according to research published by the Brookings Institution, killed at least 400,000 Americans (and sickened millions more) who could have avoided infection if they'd listened to doctors instead of Republicans and rightwing media.

But there was a method to Trump's homicidal madness. He knew what every politician who's ever run for president or studied the history of presidential elections knows: when the economy goes into the tank before an election, the incumbent always loses.

Just ask Herbert Hoover; it was over 20 years until Republican Eisenhower retook the White House, and 60 years after the Republican Great Depression before Republicans regained solid control of the House of Representatives for more than a single congressional cycle.

Trump's strategy to keep the economy on track was straightforward: keep people shopping, working and playing so our production and consumption would keep the economy going throughout the election year. No matter how many people died, especially if they were Black.

After giving in to his science advisors for a few months in March and early April, he went right back to downplaying the virus and discouraging people from even wearing masks.

That turnaround came literally the week after the day, April 7th 2020, when the New York Times, Washington Post, CNN and Fox all led their news with the news that Black people were disproportionately dying from Covid relative to white people.

Suddenly rightwing media was all over the idea we must spread the virus far and wide to achieve "herd immunity," a move Trump and his people thought would largely spare Red state white people but decimate the Black community and Blue states as I documented here.

The virus beat Trump, of course; Joe Biden is now president and Democrats took control of the House and Senate, but the echo of that murderous political strategy is still killing Americans.

And with the Delta variant, which kills unvaccinated people of all ages but only rarely causes illness in people who are fully vaccinated, Covid is about to plunge Trump's devotees into a world of hurt.

As Cox Health CEO Edwards pleaded in his tweet: "Fox is the most popular cable news in our area - you can help educate on Delta, vaccines and can save lives @TuckerCarlson."

While Red states generally ignore the threat, Blue states are doing everything they can to get ready for the onslaught of the Delta variant: New York and California are rolling out digital vaccination certificates people can show on their smartphones to get into restaurants and sports/entertainment events.

California Governor Gavin Newsom, knowing which way the political winds are blown by my colleagues on rightwing talk radio and Fox, went out of his way to say they're not passports.

"I want to make this crystal clear before folks run with it," Newsom told the press. "It's become so politicized — almost everything in the state, nation — that there's no mandates, no requirement, no passports in that respect."

But vaccine passports are what will save us, particularly since the Delta variant has already spawned a new variant of its own, Delta Plus, that's "more transmissible, more easily binds to human cells, and is potentially more resistant to antibody therapy" than even the deadly Delta variant itself.

This is why more than half of Americans surveyed want vaccine passports now, as do many business owners. When it's impossible to know if the person sitting next to you on a plane or in a restaurant is vaccinated or a Trump-humper who's trusting in Jesus or hydroxychloraquine, many people are still reluctant to dine out, vacation, or go shopping the way we did before the pandemic.

Which hurts what is now Joe Biden's economy — which is exactly what Republicans want. But they are playing with fire.

Particularly given how deadly the Delta variant is, and how often it can even create "breakthrough infections" in fully vaccinated people when they're heavily exposed to the virus. As Boston's NBC affiliate Channel 10 TV noted in a recent headline, because of the Delta variant "Nearly 4,000 Breakthrough COVID Infections Have Now Been Reported in Mass." (That's a drop in the bucket, and most don't get very sick, but still…)

The original and early variants of the Covid virus required repeated or sustained exposure to become infected; the new Delta Plus variant can apparently be caught by simply walking past an infected person. A single case in an airport limo driver in Australia shows how it works, reports today's The Washington Post:

"Video footage shows the limo driver infecting strangers at a shopping mall and in a cafe through only fleeting contact, which scientists say proves it is possible to catch the virus simply from sharing the same airspace as an infected person."

The Post article adds, "The cluster began last week with an airport limousine driver and has grown to 36 cases…"

As the BBC reported this week:

And Delta and Delta Plus are just the June varieties; there are almost certainly more contagious and deadly varieties to come as evolution continues to work its magic on the virus.

The next few months will hopefully become a "Great Awakening" in America relative to the politicized lies that Trump, Fox and rightwing media have been spewing for over a year about the dangers of Covid. And that will lead to a new wave of mask-wearing and vaccinations.

If not, it'll be the "Great Dying" for Trump followers and Fox viewers.

Thom Hartmann is a talk-show host and the author of 'The Hidden History of American Oligarchy 'and more than 30 other books in print. He is a writing fellow at the Independent Media Institute and his writings are archived at hartmannreport.com.