Last year, Texas Republicans were pumping out red-meat laws in a marathon of special legislative sessions, preparing to lock in their dominance for another decade with redistricting and salivating at a midterm environment that historically should have favored them.

Things have gotten a little more complicated since then.

While the environment in Texas still favors the GOP, it has been upended by two issues in which public opinion has trended sharply against them: gun control and abortion rights. Now, as Republicans emerge from the traditional election turning point of Labor Day, they are set to try hard to recenter the conversation on issues that are more favorable to them.

“The No. 1 issue by far in the state of Texas is the border,” Gov. Greg Abbott said in a radio interview Friday when asked to frame the fall campaign. He went on to offer differences with his Democratic opponent, Beto O’Rourke, on issues related to the border, as well as police funding and the oil and gas industry.

Abbott is facing his toughest November opponent in O’Rourke, and the two are poised to commence an unrelenting TV war after Labor Day as they try to turn out their bases and persuade the few remaining undecided voters. But it will come after Abbott got a three-week head start on O’Rourke, airing a pair of positive biographical ads since mid-August, an acknowledgment that the two-term incumbent’s image needs some buffing. 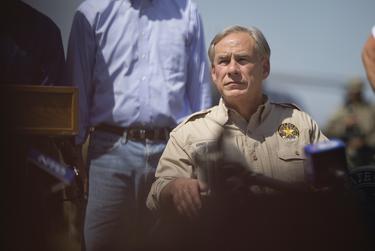 Gov. Greg Abbott speaks at a press conference with nine other governors regarding the southern border at Anzalduas Park in Mission on Oct. 6, 2021. Credit: Eddie Gaspar/The Texas Tribune

Polls show voters remain in a sour mood, with majorities saying the state is on the wrong track. And while Abbott’s approval rating has rebounded from its record lows last year, gone are the days of the kind of broad popularity he enjoyed when he was last on the ballot four years ago and cruised to a second term.

Abbott has steered the state sharply to the right since then, including on the two issues that Democrats now see as some of their strongest assets for November: abortion and guns. Abbott signed a “trigger law” that has banned virtually all abortions in the state following the U.S. Supreme Court’s decision in June to end the nationwide right to abortion. And he has resisted supporting any new gun restrictions following the Uvalde school shooting in May — including raising the age to buy an assault-style rifle, which he argued last week was not workable because courts have found such an age limit unconstitutional.

Polls regularly show that Texas voters, often by wide margins, oppose outlawing all abortion and want stricter gun laws. Democratic candidates have been increasingly explicit about how central they believe the issues will be to the November election.

“This is one of the few truly unifying issues in the state of Texas right now,” O’Rourke said during a news conference in late August marking the effective date of the trigger law. In a subsequent TV interview, he called the election a “referendum on whether we’re going to go back literally half a century or whether this state is going to move forward.”

In Harris County — which includes Houston and is the state’s largest county— Democrats see so much upside in the issue that the county judge, Lina Hidalgo, started airing TV ads in early August accusing her Republican challenger of being silent on abortion rights following the Supreme Court’s decision. The challenger, Alexandra del Moral Mealer, did not respond to The Texas Tribune’s request for comment on her position.

Republicans are still trying to find a rebuttal. Rather than defend the laws he has signed, Abbott has sought to argue O’Rourke is the one with extreme views on abortion, noting his longtime refusal to say whether he supports any limits on the practice. When he has had to address the laws, including the lack of exceptions of rape victims, Abbott has made awkward comments like his suggestion Friday that victims can take emergency contraception to prevent a pregnancy. 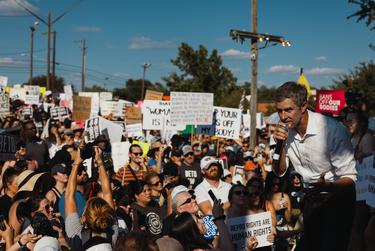 Democratic candidate for governor Beto O’Rourke speaks at a rally in support of abortion rights in Austin on June 26, 2022. Credit: Jordan Vonderhaar for The Texas Tribune

At the same time, Texas Republicans have been making not-so-subtle appeals to women voters. Last month, Comptroller Glenn Hegar and state Sen. Joan Huffman, a Republican from Houston and the top budget writer in the Senate, abruptly announced their support for repealing the sales tax on feminine hygiene products, an idea Abbott quickly endorsed. Women also have factored prominently into his TV ads so far, the first of which was narrated by his wife, Cecilia Abbott.

As for O’Rourke, Abbott’s campaign has made little secret that it plans to hammer him over comments he made around the time of his failed 2020 presidential campaign, saying he would take border walls down, expressing support for the Green New Deal and praising activists who were pushing to “defund the police.” The issue of police funding is the topic of Abbott’s first negative TV ad against O’Rourke, which started airing Monday.

O’Rourke has denied that he supports defunding the police — a term with an ambiguous meaning to many — but said in 2020 that he “really love[d]” the idea of taking money away from “over-militarized” police departments and reinvesting it in social services.

When it comes to police funding, Republicans have found a fresh wedge in Harris County. Last month, Hegar accused county commissioners of violating a new state law to stop local governments from cutting police spending, an accusation that Abbott swiftly amplified. The county has denied the charge and is challenging the comptroller in court.

In addition to GOP efforts to change the topic from abortion and guns, Democrats also will have to contend with a president from their party, Joe Biden, who remains very unpopular in Texas. The state Democratic Party is seeking to counteract that, announcing Friday that it is launching a four-week tour after Labor Day to tout the administration’s accomplishments.

Nationally, Democrats have felt some relief from the tough political environment as Congress has proven unusually productive for an election year, passing a landmark health care and climate spending package last month. And they have been encouraged by recent election victories in Kansas, Alaska and New York where abortion was a leading issue.

Cliff Walker, a partner at the progressive consulting firm Seeker Strategies, said Texas Democrats have increasing reason to be optimistic due to “unprecedented national action” on important issues, combined with “unprecedented state failure” like the 2021 power grid collapse.

“This is a much better hand to play than anyone would have imagined, not just a few months ago, but at the start of the election cycle,” Walker said.

It all points to a more complex environment than Republicans had anticipated. The emergence of abortion and guns as top-of-mind issues has thrown up new obstacles in the suburbs, where they had hoped to regain territory they lost under former President Donald Trump. One major example of that is Texas House District 70, a new open seat in the Dallas suburbs that represents one of the few pickup opportunities for either party in the lower chamber post-redistricting.

Republicans are also conceding they cannot take rural Texas, a long-time firewall, for granted, with Lt. Gov. Dan Patrick recently launching a 131-stop bus tour targeted at rural voters. O’Rourke has been barnstorming rural Texas, and Patrick is in a rematch with his 2018 Democratic opponent, Mike Collier, who performed better than O’Rourke that year in rural counties.

Republicans are still upbeat about their chances in South Texas, which they are targeting more seriously than ever after Biden underperformed there in 2020. In addition to the three congressional races there they have long been targeting, they are getting more serious about flipping an open state Senate seat in the Rio Grande Valley, which also happens to be the only competitive state senate seat on the November ballot after redistricting. 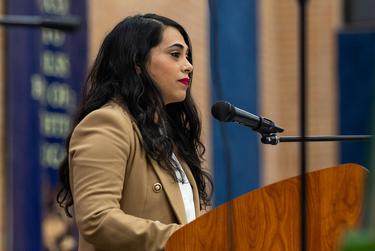 The top super PAC aligned with the U.S. House GOP leaders, the Congressional Leadership Fund, recently announced it was reserving $3 million in TV ads to reelect U.S. Rep. Mayra Flores, R-Los Indios, who flipped the Rio Grande Valley seat in a June special election. The committee announcement was the most serious signal yet that national Republicans are committed to her November election, despite her running in a district redrawn to be more favorable to Democrats.

“South Texas continues to represent some of our best pickup opportunities nationwide,” said Calvin Moore, a spokesperson for the Congressional Leadership Fund.

The most competitive race in South Texas remains the open seat in the 15th Congressional District. Seeking to show how committed Democrats are to defending the seat, their nominee, Michelle Vallejo, released a list of over 100 endorsements from across the state Friday. It came with a statement criticizing Republican nominee Monica De La Cruz for her “extreme and radical views” on abortion, among other things.

De La Cruz, unsurprisingly, is talking about something else in her campaign. Her first TV ad features her flying over the Mexican border in a helicopter, landing and telling voters about “Biden’s border crisis” and the economic pressures under his administration.

The full program is now LIVE for the 2022 Texas Tribune Festival, happening Sept. 22-24 in Austin. Explore the schedule of 100+ mind-expanding conversations coming to TribFest, including the inside track on the 2022 elections and the 2023 legislative session, the state of public and higher ed at this stage in the pandemic, why Texas suburbs are booming, why broadband access matters, the legacy of slavery, what really happened in Uvalde and so much more. See the program.

This article originally appeared in The Texas Tribune at https://www.texastribune.org/2022/09/06/texas-2022-election-greg-abbott-beto-orourke/.