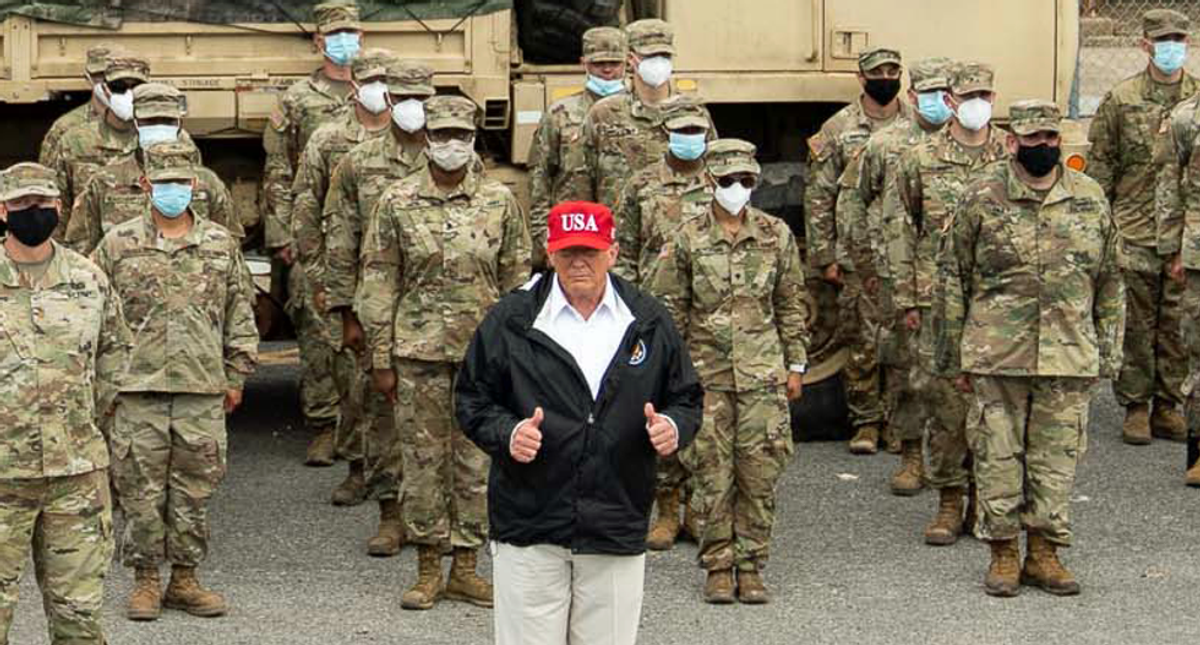 A lot of names have been bandied around to describe the form of government Donald Trump tried to impose on us during his administration. "Fascism" was used commonly, as were words like "little dictator," and "cult of personality."

But really what Donald Trump was proposing and trying to institute is a fairly common form of government, a variation of authoritarianism called oligarchy.

We are seeing it played out around the world in governments controlled by rich elites and run by authoritarians like Duterte, Bolsonaro, Netanyahu, Erdowan, Putin, Orban, Modi, and Duda.

They seem like they are increasingly becoming one-man-rule governments, but authoritarianism is just the midpoint after oligarchs begin corrupting democratic governments that have not yet become full-blown fascist oligarchies.

Because they are rarely stable, these midpoint authoritarian governments usually are grown in, and rise up to seize control of democracies, as has happened several times in the Philippines, for example, where the biggest businesses are inextricably intertwined with the state, corruption is rampant, and the media, the courts and the legislature are all essentially under the control of the billionaire or oligarchic class.

Oligarchy is when the very rich rule a country largely for their own benefit. They typically bring along a charismatic but compliant leader at the top (often an oligarch himself, and if he doesn't start out that way he certainly ends that way), and are supported at the bottom by "authoritarian followers" who feel insecure about their personal and economic prospects and want a "big daddy" who will soothe their anxieties, affirm their victimhood and outrage, and help them sleep at night.

This corruption of politics is exactly what has happened in the United States since the late 1970s when the Supreme Court ruled (in their Buckley and Bellotti decisions in 1976/1978) that billionaires and corporations owning politicians was merely "First Amendment-protected free speech." It brought us the Reagan Revolution.

They doubled down on this in 2010 with their Citizens United ruling, saying that if government prevented billionaires and giant corporations from overwhelming elections with their money and advertising, we were not just inhibiting their free speech.

The conservative justices on the Court invented a bizarre new doctrine to justify Citizens United, saying that average people were being disadvantaged when billionaires and corporations couldn't pour unlimited money into the political process because if they were stifled we'd lose our "right to hear" from some of the most "important" and "well-informed" players in the economic and political game.

This "right to hear" is now, in our political process, the Supreme Court-created foundation of oligarchic control over the Republican Party, diminishing parts of the Democratic Party, and, increasingly, over what we refer to as "Red States."

Authoritarian movements, as the Republican Party has recently become, typically have a few predictable hallmarks. They include:

Countries typically begin the transition from democracy into oligarchy and sometimes even outright fascism when the oligarchs seize control of a large part of the political process, typically a major political party.

This has happened in the United States over the past 40 years under the rubric of the Reagan Revolution. The Republican Party is now entirely controlled by the oligarch class, who also have functional control over as many as half of the individual members of the Democratic Party.

Slowing down or even reversing America's slide into oligarchy will require a number of things the Biden administration has put forward.

We must show that democratic government can actually still work, reducing the demand for a strongman "savior" like we saw with Trump, and the passage of the expansive American Rescue Plan was a good start.

If Biden can get both his American Jobs Plan and American Families Plan enacted, rebuilding our physical, human and intellectual infrastructure, it will take a lot of wind out of the sails of the authoritarian movement in this country.

By proposing HR1, the For The People Act, the Democratic Party has chosen to explicitly repudiate oligarchy as a form of government. It requires transparency from "big money" and meaningfully reduces its influence, as well as ending minority-rule schemes like gerrymandering while establishing baseline minimum standards for elections in America.

By holding democracy high as a primary value, the John Lewis Voting Rights Advancement Act guarantees and expands democracy itself in America, which can rapidly and effectively kneecap oligarchy.

The success or failure of these initiatives — all fiercely opposed by the GOP and the oligarchs who own that Party — will determine whether America again embraces democracy, or picks back up on Donald Trump's nearly-successful move to push America into a full-blown fascistic form of oligarchy.

The stakes are higher than they've been since the 1860s and the 1930s; this may be our last chance to rescue democracy in this country.