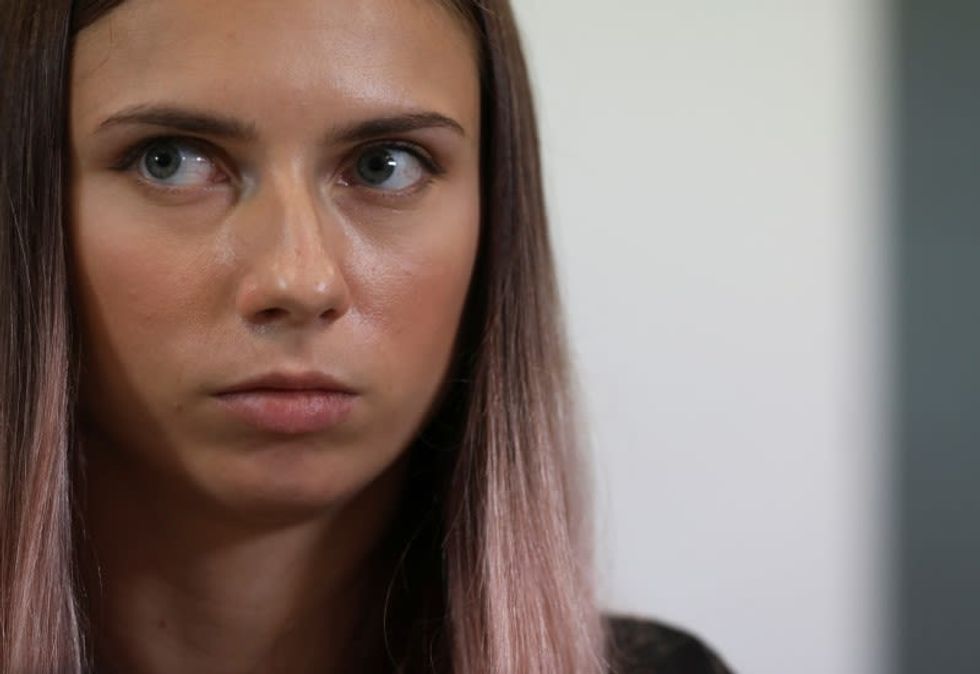 By Gabrielle Tétrault-Farber and Mitch Phillips

WARSAW/TOKYO (Reuters) - Olympic sprinter Krystsina Tsimanouskaya travelled thousands of miles because she desperately did not want to run 400 metres.

The 24-year-old Belarusian was removed from the Tokyo Olympics by her team and taken to the airport against her wishes last Sunday after complaining publicly that coaches had entered her in the 4x400m relay days before the event.

She refused to board https://www.reuters.com/lifestyle/sports/exclusive-olympics-belarusian-athlete-says-she-was-taken-airport-go-home-after-2021-08-01 the flight home and has since sought refugee status in Poland, fearing for her safety if she returned to Belarus.

Belarus entered Tsimanouskaya in the relay scheduled for Aug. 5 to replace one of two runners deemed ineligible to compete because they had not been subjected to enough doping tests.

Tsimanouskaya had been set to run the 200m on Aug. 2, a day after she was removed from the team. The Belarusian Olympic Committee said she was being sent home on doctors' advice relating to her emotional and psychological state.

Tsimanouskaya, though, told Reuters she was being sent home for speaking https://www.reuters.com/world/europe/exclusive-belarusian-sprinter-decided-defect-way-airport-family-fears-about-2021-08-05 "about the negligence of our coaches" and that she had been included in the relay without her knowledge.

Few athletes who excel at the shorter sprints can add the speed endurance necessary to be competitive over 400m, widely regarded as one of the most demanding of all distances. To do it without any preparation would be extraordinarily tough.

"You can also classify short sprinters who run the 200m and longer sprinters that can run the 100m but can also win the 200m."

Stuart McMillan, a coach who works with some of the world's top sprinters, said Tsimanouskaya's participation in the relay would have probably affected her performance in the 200m had she not been removed from the team ahead of the event.

"She had a realistic shot at making the semi-final," McMillan told Reuters in an email. "If they had asked her to be part of the relay weeks in advance, then maybe she could adjust her programming to fit it in. But if they asked her the day before or the day of, then that's not acceptable - and not fair."

John Regis was predominantly a 200m runner who won multiple Olympic and world championship medals for Britain at both 4x100m and 4x400m. He often ran both at the same event, and said he was "scared" of the longer distance.

"I may have world and European gold medals from running a leg of the 4x400m, but I think I ran the individual 400m about four times in my career," he said. "I hated it. I would get to 300 and it would feel as if my whole body was on fire."

Usain Bolt was often touted as potentially well suited for the 400m, but the Jamaican always dismissed the suggestion by saying the one lap event was just too painful.

Some athletes have said Tsimanouskaya's objections at having to run the event without having trained for the distance were legitimate.

"The 400m is a completely different distance from what Krystsina runs," Belarusian decathlete Andrei Krauchanka, the 2008 Olympic silver medallist, told Reuters. "To run 400m can damage your health, it's crazy work."

"Krystsina has no blame at all in this situation. It's not her fault that the relay fell apart."

The hastily assembled Belarussian team finished a distant last in their 4x400m semi-final, more than 11 seconds behind first-placed Jamaica.

"They should have at least warned her in advance, given her the opportunity to prepare," said Aliaksandra Herasimenia, a former Olympic swimmer who heads the Belarusian Sport Solidarity Foundation, a group that supports athletes jailed or sidelined for their political views.

"When athletes compete in an event that is not theirs, they can get injured. Anything can happen."

(Reporting by Gabrielle Tétrault-Farber in Warsaw and Mitch Phillips in Tokyo; Additional reporting by Kayon Raynor in Kingston; Editing by Lincoln Feast.)