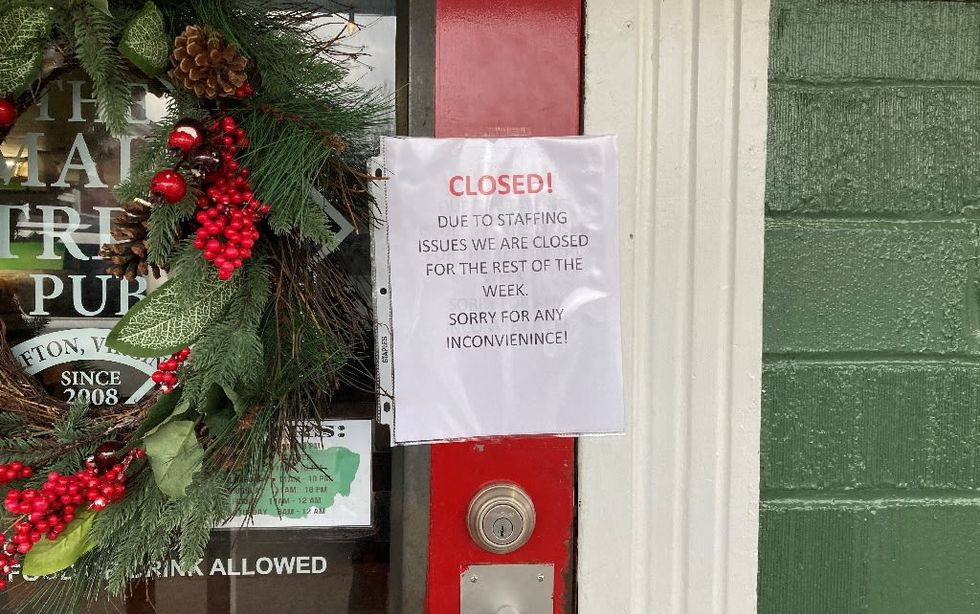 The Main Street Pub in Clifton, Virginia, has struggled with ongoing staffing issues throughout the pandemic.

Holiday events have been scrapped in droves, thousands of flights canceled, cruises are now off limits: the Omicron variant has wreaked havoc in the United States, and the new year could see more issues exacerbating the worker shortage and price increases.

"We are starting to see some initial signs that Omicron is having an impact on the economy, mainly in the sectors where face to face interactions are most important," in particular service sector businesses like bars and restaurants, Oren Klachkin of Oxford Economics told AFP in an interview.

The world's largest economy had been poised to put Covid in the rearview mirror, but on the eve of the new year, the virus is once again playing the spoiler.

The highly contagious Omicron variant, which appeared a month ago, is causing the number of new cases to skyrocket to record levels during the holiday travel season.

After 5,013 cases were reported in US territorial waters between December 15 and 29, compared to just 162 in the prior two weeks, health authorities warned Americans to avoid cruise travel, even for the fully vaccinated.

The cruise industry called the decision by the US Centers for Disease Control and Prevention disappointing.

The warning was "particularly perplexing considering that cases identified on cruise ships consistently make up a very slim minority of the total population onboard -- far fewer than on land -- and the majority of those cases are asymptomatic or mild in nature," the Cruise Lines International Association said in a statement.

Economists say it is difficult to quantify the economic consequences of this new variant.

Moody's analysts lowered their growth forecast for the first quarter because of Omicron, cutting it to around two percent rather than the five percent previously expected.

The fear of contagion that is causing events to be canceled and the decline in restaurant reservations "are only part of the equation," Grant Thornton economist Diane Swonk warned in a tweet, noting that employers face worsening manpower issues due to the rise in infections.

"This is not new, just magnified by Omicron," she said.

Rising case counts mean more workers in quarantine due to a positive Covid-19 test or contact with an infected person, and the resulting personnel shortage could paralyze a large part of the economy.

"We have already seen the beginning of what I -- and clearly the CDC fears -- will be a surge in those out sick and unable to keep even vital services going," Swonk said.

The most visible impact was the thousands of flights canceled over the Christmas holiday as airlines struggled to get enough flight crews on planes.

In an effort to ease the strain of long quarantine requirements, President Joe Biden's administration on Monday cut the recommended isolation period in half to five days for infections without symptoms.

Even before the latest strain appeared, businesses nationwide had been struggling to fill open positions, amid a wave of retirements and growing reluctance to return to in-person work amid the pandemic.

The unemployment rate in November dropped to 4.2 percent, but participation in the workforce remains well below the pre-pandemic level. The government will release the closely-watched December jobs report on January 7.

Oxford Economics expects hiring to continue and the economy to add 400,000 jobs a month in 2022, but "that doesn't mean there won't be shortages in some sectors," economist Nancy Vanden Houten cautioned.

Some economists also fear inflation, which has soared to the highest rate in nearly four decades, will worsen if the variant further disrupts manufacturing and transport worldwide.

"Inflation in many services and energy prices could abate, at least temporarily but there is the real risk that variants are now more inflationary than disinflationary," Swonk said.

But Mark Zandi, chief economist for Moody's, said he expects the price impact of the new variant to be "modest," unlike the Delta strain "which significantly fanned inflation."

Supply bottlenecks have eased and "while more workers will get sick with Omicron than Delta, they should get back on the job more quickly."