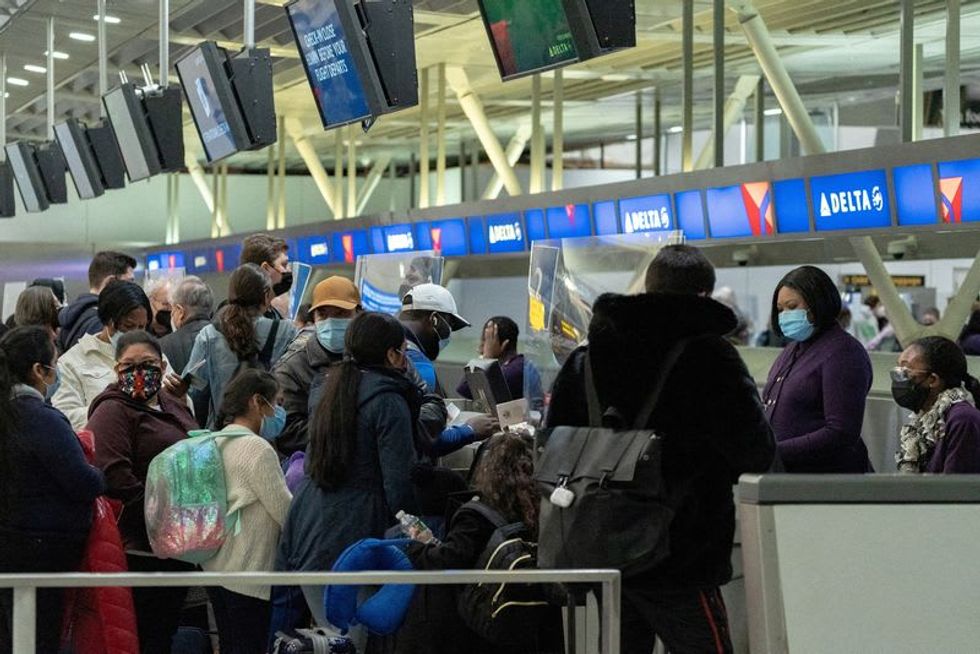 By Abhijith Ganapavaram and Aishwarya Nair

(Reuters) - U.S. airline cabin crew, pilots and support staff are reluctant to work overtime during the holiday travel season despite being lured with hefty financial incentives because of the growing fear of contracting COVID-19 and the prospect of dealing with unruly passengers, three airline unions said.

That reluctance, combined with bad weather and tight staffing at pandemic-battered airlines, led to massive flight cancellations over the past week, the unions said. The issues will likely result in more strain in the weeks ahead as the spread of the Omicron variant accelerates.

"We have negotiated holiday incentives to help with operational challenges, but there's only so far you can stretch people," Sara Nelson, international president of the Association of Flight Attendants-CWA (AFA), representing 50,000 flight attendants at 17 airlines, said in a statement.

In the months leading up to the holidays, airlines were wooing employees to ensure solid staffing, after furloughing or laying off thousands over the last 18 months as the pandemic crippled the industry.

The industry was hopeful that staff would pick up overtime to fly a record number of passengers since the pandemic began, according to the AFA.

But the fast-spreading Omicron variant, which is leading to unprecedented COVID-19 cases in the U.S., has caused staff to re-think workloads. On Thursday, over 1,200 flights were canceled within, into, or out of the United States as of 3:29 p.m. ET, data from flight-tracking website FlightAware.com showed.

JetBlue Airways Corp said it was cutting its schedule through Jan. 13 by about 1,280 flights due to crew members getting sick.

Delta Air Lines Inc said incentive pay is being offered to flight crews but did not elaborate further.

The U.S. Federal Aviation Administration (FAA) said on Thursday that an increasing number of agency employees had tested positive for COVID-19.

"To maintain safety, traffic volume at some facilities could be reduced, which might result in delays during busy periods," an FAA spokesperson said.

Violent skirmishes between passengers and flight crew have also hit a record high this year, prompting U.S. regulators to crack down harder. The FAA in early November said it had referred more than three dozen unruly passengers to the FBI for potential criminal prosecution.

Still, many cabin crews fret about their safety on board.

"It's not worth the risk when tensions are high to go out there and risk getting hurt or possibly disabled on the job," said Thom McDaniel, International Vice President at the Transport Workers Union of America (TWU), which represents over 150,000 members across several sectors, including airlines.

For example, U.S. prosecutors in Colorado charged a 20-year-old California man with assaulting a flight attendant on an Oct. 27 American Airlines flight bound for Santa Ana, California, that forced the pilots to divert the flight.

Both AFA and TWU have made public calls for regulators to address the rising incidents on board.

Airlines have offered bonuses and up to triple pay for employees working during the holidays, but few are biting.

"A lot of flight attendants are not willing to pick up (extra shifts), even for extra pay because they fear for their own safety," McDaniel said.

Some pilots have also rebuffed extra pay. The American Airlines' pilot union had declined the company's offer of as much as double pay for working during the holidays, according to an internal memo seen by Reuters last month.

"We have limits by the FAA and those sometimes are approached, but what you have is a human limit," said Allied Pilots Association spokesman Dennis Tajer, who represents American Airlines pilots.

The Allied Pilots Association representing Delta pilots said resolving scheduling issues will be a priority when the union returns to contract negotiations with the airline in January.

(Reporting by Abhijith Ganapavaram and Aishwarya Nair in Bengaluru, additional reporting by Dan Burns in New York and Eric M. Johnson in Seattle; Editing by Ben Klayman and Bernard Orr)