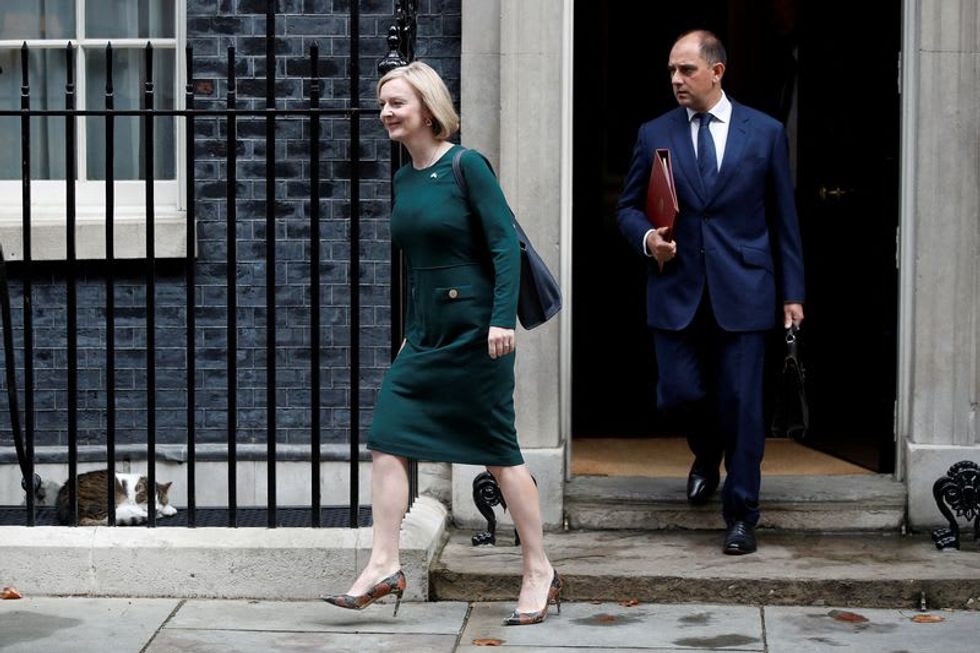 LONDON (Reuters) - British Prime Minister Liz Truss will pledge at a UN summit to meet or exceed the 2.3 billion pounds ($2.6 billion) of military aid spent on Ukraine in 2002 in the next year, doubling down on her support for Kyiv after Russia's invasion.

Truss, on her first international visit as prime minister, will call on other leaders at the UN General Assembly in New York to help end Russia's energy stranglehold on Europe, saying it has allowed too many lives to be "manipulated".

Her trip to New York, just hours after the funeral of Queen Elizabeth, is the first event in a busy return of British politics, put on hold during a period of national mourning for the late monarch.

It marks the start of a packed week for Britain's new prime minister, when her government is expected to set out a new energy support package for businesses, a plan to help the National Health Service and much-promised tax cuts.

In New York, where Truss will meet U.S. President Joe Biden on Wednesday, the British leader will again pledge her support to Ukraine, which she says has managed to push back Russian forces with the help of Western military aid.

"My message to the people of Ukraine is this: the UK will continue to be right behind you every step of the way. Your security is our security," she said in a statement before her speech to the summit, which begins on Thursday.

"Too many lives – in Ukraine, in Europe and around the world – are being manipulated by a dependence on Russian energy," she added. "We need to work together to end this once and for all."

Britain said it was the second-largest military donor to Ukraine, committing 2.3 billion pounds in 2022, and that support next year would be determined by the Ukrainian army's needs, although it is expected to include equipment such as rocket artillery systems.

Culture minister Michelle Donelan told Sky News that the purpose of the trip to New York was "not to secure a trade deal", although it might be discussed at the Biden meeting.

Britain had viewed a trade deal with the United States as one of the biggest prizes of leaving the European Union but hopes of a quick agreement were dashed when the Biden administration made clear it was not a priority.