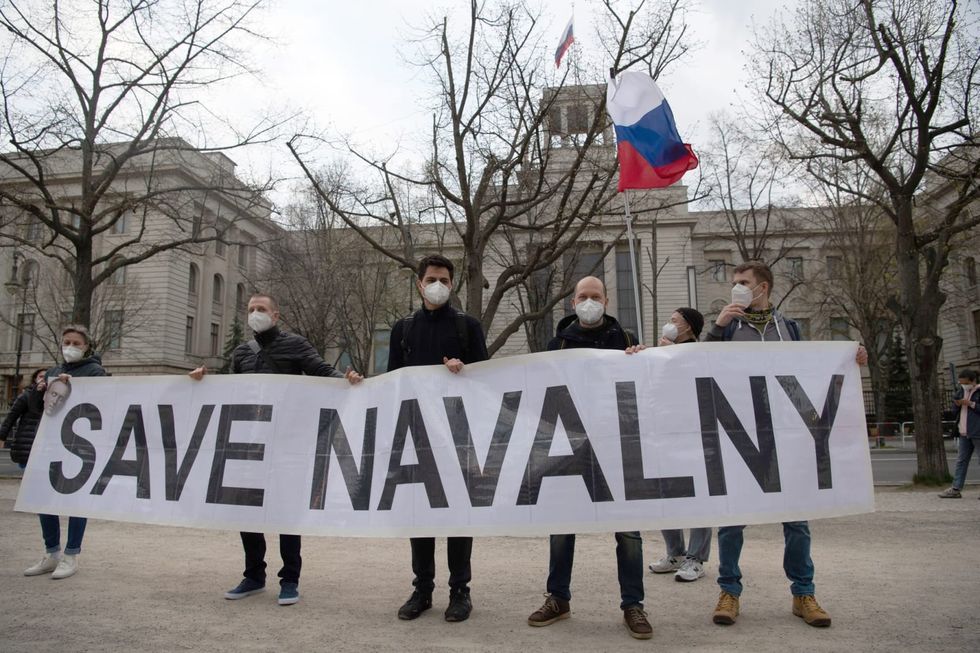 Demonstrators stand in front of the Russian embassy in Berlin during a demonstration to demand the release of the Russian imprisoned regime critic Navalny. One year after the poison attack on Russian dissident Alexei Navalny in Siberia, Russia has accused the West, and Germany in particular, of a smear campaign. Paul Zinken/dpa-Zentralbild/dpa

One year after the poison attack on Russian dissident Alexei Navalny in Siberia, Russia has accused the West, and Germany in particular, of a smear campaign.

In a statement, the Foreign Ministry in Moscow again demanded proof that Navalny was poisoned with the chemical agent Novichok.

On the first "anniversary of the Navalny case" this Friday, the ministry claims that Germany and its allies prepared a provocation at the time to discredit Russia in the eyes of the world community.

The 45-year-old Navalny is the fiercest opponent of Russian President Vladimir Putin.

He had fallen into a coma on a flight from the Siberian city of Tomsk to Moscow on August 20, 2020. The plane made a stopover in Omsk because of the emergency. There, Navalny was taken to hospital, then later flown out to Germany, where he was treated at Berlin's Charite hospital, later regaining consciousness and strength.

Laboratories of the Bundeswehr as well as in France, Sweden and at the Organization for the Prohibition of Chemical Weapons (OPCW) detected the illegal agent Novichok.

Germany and the EU called on Russia to clarify the case and also imposed sanctions as a means of exerting pressure.

While Russia denies the accusations to this day, Navalny and his team have presented numerous investigations and documents that are supposed to prove the attack.

The opponents of the Kremlin accuse a hit squad of the domestic intelligence service FSB under Putin's command of having prepared the attack, which the head of the Kremlin rejects.

So far, the West has not provided any evidence for its "inexcusable accusations," the Foreign Ministry in Moscow claimed.

Navalny's associates reacted to the announcement with outrage. The Russian authorities had repeatedly spread other versions - even making the claim that Navalny had been poisoned by Western secret services or had wanted to kill himself.

Apparently, this is how Moscow is preparing for German Chancellor Angela Merkel's visit to Putin in the Kremlin this Friday.

"I already refuted all the nonsense and lies in detail in a video months ago," Navalny's associate Maria Pevchikh said. The film had more than 8 million views as of Thursday morning.