One year after assault, US Capitol still licking its wounds 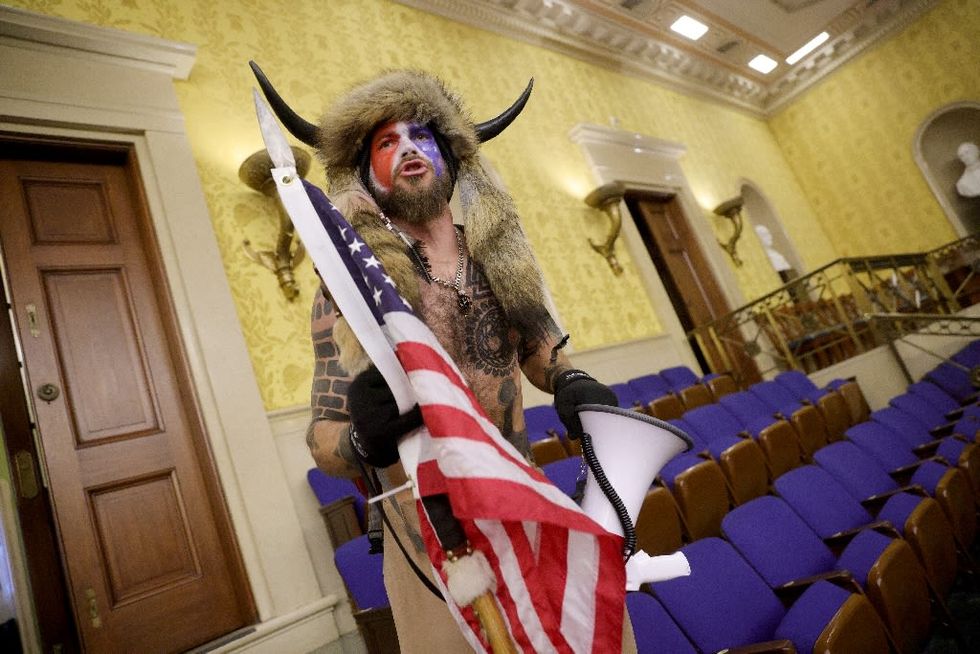 Jacob Chansley, a pro-Trump demonstrator who joined in the storming of the US Capitol on January 6, 2021, was later sentenced to 41 months in jail

Washington (AFP) - Mourn, or move on? A year after the mob of Donald Trump supporters stormed the US Capitol, lawmakers are trying to heal the deep rifts left behind by the insurrection that sought to overturn the election results.

"January 6th 2021 will be forever remembered as a day of enduring infamy, a permanent blemish in the story of American democracy," said Chuck Schumer, the top Democrat in the Senate, a few days before the anniversary.

"This was aimed at undoing our democracy. Thank God, they failed," Schumer added.

"They," in this case, being the crowds of demonstrators in helmets and carrying flags emblazoned with the name "Trump," and who a year ago stood in the same spot in the Capitol where Schumer was delivering his sober words.

The now infamous Q-Anon guru with his bison headdress and bare chest was among them, brandishing a megaphone.

A few steps away, a television set has been installed to show the commemorations of the fateful day on Thursday. President Joe Biden is due to speak, one of a series of elected officials sharing their memories of the ordeal.

A conversation between historians is also planned, with the aim of "establishing and preserving the story" of January 6.

Because even within the institution that was stormed, what actually happened is the subject of heated debate.

In recent months, elected officials close to former president Trump have tried to push quite a different story to the one being told by the Democrats.

They say that January 6 was just a symptom of all that has gone wrong, and that those arrested after the assault are "political prisoners."

With less than a year until crucial mid-term elections, some of their colleagues are making half-hearted pleas to move on.

"We have constituents back home that we need to be working for, our focus needs to be there," said Republican Joni Ernst, many of whose colleagues have decided to shun Thursday's events.

'A lot of hurt and harm'

On social media, in press releases and even in the corridors of this venerable institution, the multiple and conflicting stories spark angry debate. The wounds of January 6 are still very much alive.

"I think there's still a lot of hurt and harm, but a lot of good has already come," Democratic Senator Corey Booker told AFP.

The imposing wooden planks covering some of the windows for months have been removed and the broken panes which until recently reminded everyone of the violence of that day in January have finally been replaced.

The US Congress is safe, the Capitol Police chief insisted during a rare press conference on Tuesday.

In the snow, the dome of the Capitol begins to gleam again.