Orthodox priest shouts 'Pope, you are a heretic' at Francis in Athens 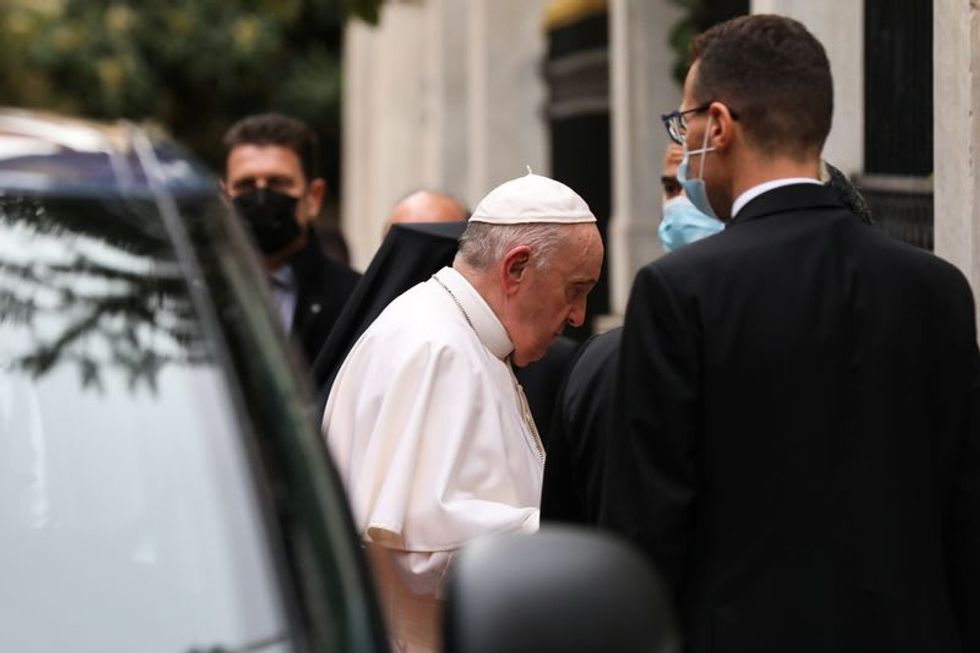 By Philip Pullella and Karolina Tagaris

ATHENS (Reuters) -An elderly Greek Orthodox priest shouted "Pope, you are a heretic" as Pope Francis was entering the Orthodox Archbishopric in Athens on Saturday and was taken away by police, a reminder of the lingering distrust between the two divided churches.

Video showed the man, who was dressed in black robes and black hat and had a long white beard, shouting the words in Greek outside the building before police bundled him away.

Witnesses said he shouted loud enough for the pope to hear the commotion. The man appeared to have fallen while being taken away and was lifted up by police.

Francis arrived in Greece on Saturday for a three-day visit that Greek Catholics hope will bring the Eastern and Western churches closer together.

Christianity split into the Roman Catholic and Eastern Orthodox churches in 1054 in what is referred to as the Great Schism, and for centuries relations were rocky.

In his address to the archbishop, Beatitude Ieronymos II, Francis asked forgiveness in the name of the Roman Catholic Church for its part in the historical wrongs that led to the breakup.

"Tragically, in later times we grew apart. Worldly concerns poisoned us, weeds of suspicion increased our distance and we ceased to nurture communion," Francis told Ieronymos, whom he met during his first trip to Greece in 2016.

"I feel the need to ask anew for the forgiveness of God and of our brothers and sisters for the mistakes committed by many Catholics," Francis said.

Pope John Paul II first asked forgiveness for the Catholic role in the break-up when he visited Greece in 2001.

Catholics and Orthodox have been involved in dialogue aimed at eventual reunion for decades and cooperate in many social initiatives but the two sides are still far apart theologically.

"We believe you have the courage and the sincerity to examine the failures and omissions of your fathers," Ieronymos told Francis. "Between those who want to be called Christian brothers, the best language is, and always will be, honesty."