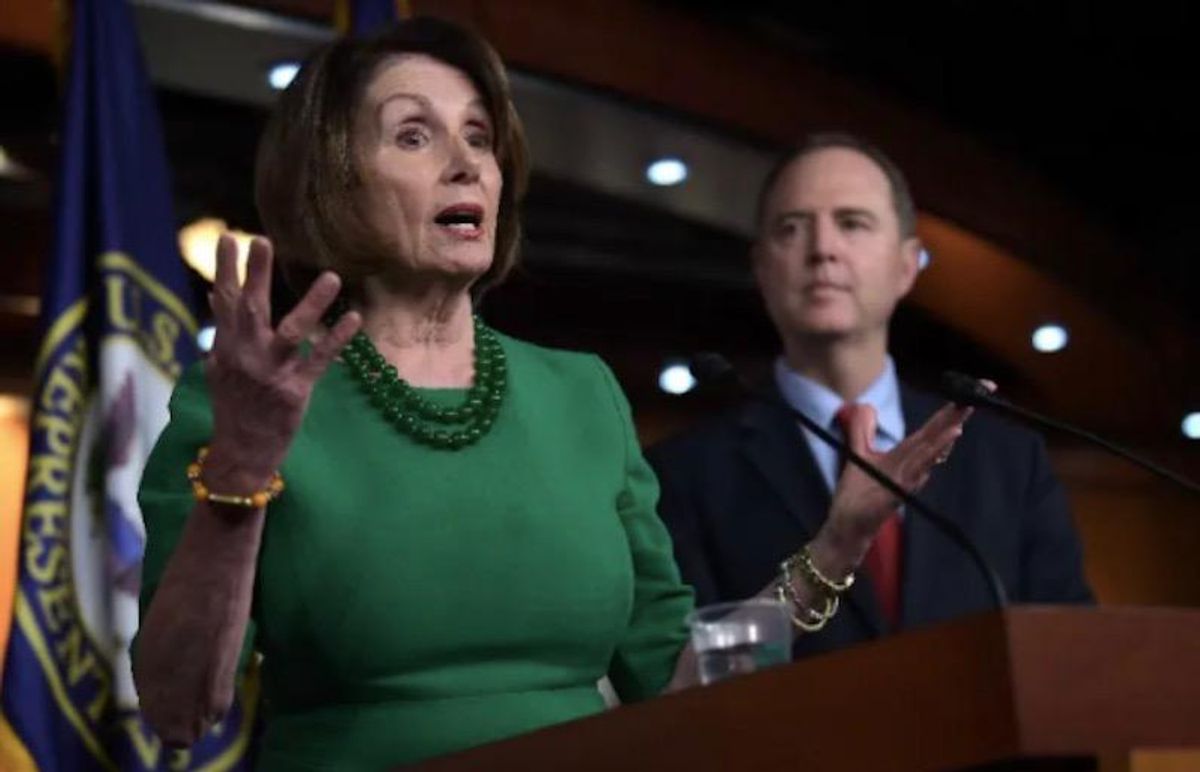 House of Representatives speaker Nancy Pelosi with Adam Schiff, chairman of the intelligence committee; she is pushing for an inquiry into Trump administration surveillance of Democrats including Schiff(AFP)

US House speaker Nancy Pelosi on Sunday demanded that two former attorneys general testify about what she called a "rogue" Justice Department attempt to secretly obtain data from Democrat lawmakers and news outlets.

"What the (Trump) administration did -- the Justice Department, the leadership of the former president -- goes even beyond Richard Nixon," she said on CNN, referring to the Watergate scandal that ended the Nixon presidency.

Democrats expressed outrage Friday over news that the Trump Justice Department had secretly surveilled Democrats probing possible collusion with Russia, securing the phone records of top political foes -- and even of family members including a child -- in what they called an unprecedented abuse of power.

The department also seized records of reporters from CNN, the Washington Post and the New York Times without their knowledge.

The probe began under Attorney General Jeff Sessions and continued under his successor, Bill Barr. Both recently denied knowledge of any such secret subpoenas.

"This is about undermining the rule of law," Pelosi said Sunday. "And for attorneys general Barr and Sessions to say they didn't know anything about it is beyond belief.

"So, we will have to have them come under oath to testify about that."

Asked if she would subpoena the two men if necessary, Pelosi said she hoped they would "honor the rule of law."

She went on, "the Justice Department has been rogue under President Trump, understand that, in so many respects."

Pelosi said it was essential to determine whether those involved in the operation -- whose targets included intelligence committee chairman Adam Schiff, a Democrat -- are still in the Justice Department.

"No matter who is president, whatever party, this cannot be the way it goes."

Pelosi also said she would decide Monday whether to appoint a select committee to investigate the Jan. 6 storming of the US Capitol by Trump supporters.

House-passed legislation to create a bipartisan commission to examine the insurrection was blocked when only a handful of Senate Republicans indicated they would support it.

Bipartisan support would confer greater credibility on such an inquiry.

Pelosi told CNN she had promised her Senate counterparts she would give them until Monday to attempt to find the needed votes -- an attempt most analysts expect to fail.

If it does fall short, the speaker said, she will decide whether to go ahead without Republican support.

"This is about an assault on our democracy, on our Capitol of the United States," she said.

"The American people deserve and must have answers. We will seek the truth. We will find the truth."