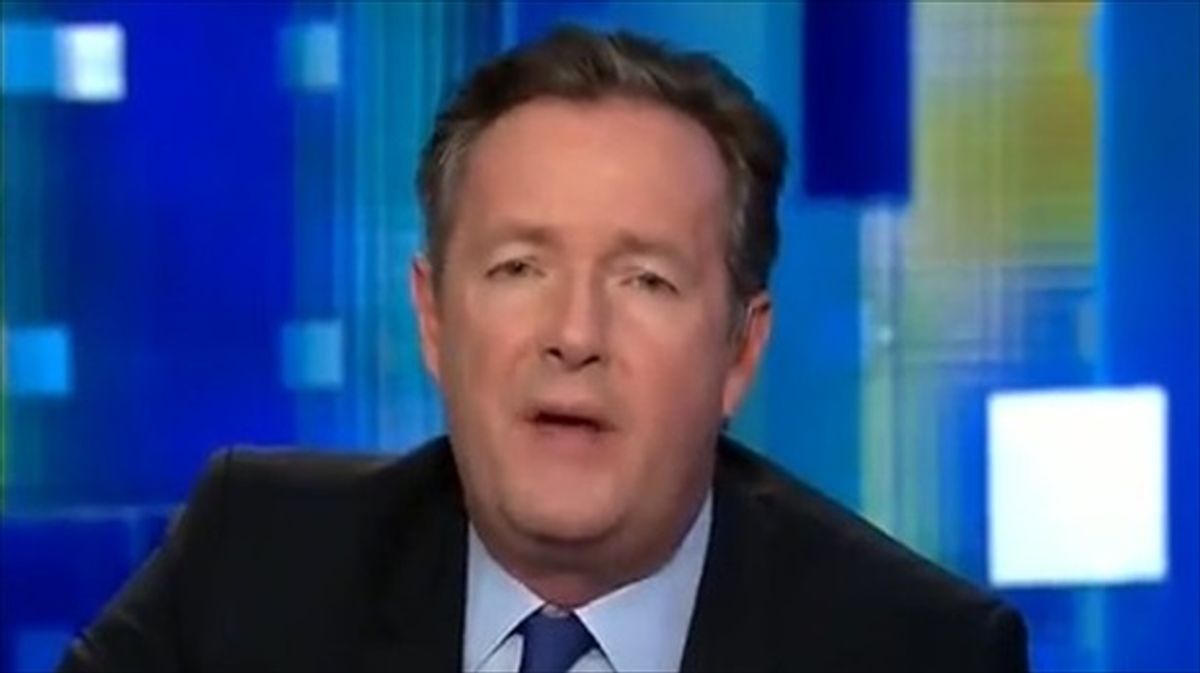 Former ITV commentator Piers Morgan — who walked off the set of "Good Morning Britain" earlier this month after being called out for incendiary comments about Meghan Markle — has doubled down on his assertions that Markle is lying about the racism she experienced as a member of the British Royal Family.

In a lengthy opinion piece for The Mail on Sunday Morgan chronicles his feelings, day by day, since the "Good Morning Britain" fallout on March 9. The rant ranges from detailing threats that his sons have received and weighing in on the Teen Vogue editor debacle, to defending Sharon Osbourne and of course dismantling everything in that bombshell interview with Oprah Winfrey.

The longer Markle and Prince Harry went on, the less he believed. The most sensational implication, Morgan alleges, is that their son, Archie, was barred from being a prince because of his skin color.

"It sounded complete nonsense when she said it, and it is; he's not a Prince because, technically, the great grandchildren of the Monarch are not bestowed with titles 'Prince' or 'Princess' unless they're in the direct line to the throne," Morgan wrote.

"This rule applies regardless of the child's mother's ethnicity. So, the most serious assertion, one that has already sent racially charged America into a tailspin of outrage, was a falsehood presumably designed to cause maximum harm to the Royals."

He also disagreed with Markle's claims that the British tabloids targeted her specifically because of systemic racism.

"Meghan's had no worse media treatment than other Royal brides such as Diana, Fergie, Kate, Camilla or even that other Monarchy-rattling American divorcee, Wallis Simpson," he wrote. "But she's the first to claim negative press has been motivated by racism, and it's a very dangerous charge to make with so little to back it up."

Morgan also said that he quit his position at ITV because he refused to issue an apology for statements he made on-air about disbelieving Markle's assertion that, after having persistent suicidal thoughts while pregnant, she sought help from a senior royal but was rebuffed because "it wouldn't be good for the institution."

"I was ashamed to have to admit it to Harry," Meghan said in the interview with Winfrey. "I knew that if I didn't say it, I would do it. I just didn't want to be alive anymore."

Morgan latched onto this story on "Good Morning Britain," saying, "Who did you go to? What did they say to you? I'm sorry, I don't believe a word she said, Meghan Markle. I wouldn't believe it if she read me a weather report."

In response, more than 41,000 viewers wrote in to Ofcom, the United Kingdom's media regulator to complain. However, Morgan said he wasn't going to issue an apology just to satisfy the "woke brigade."

Morgan also wrote about the repercussions of "The Talk" co-host Sharon Osbourne supporting him. Osbourne, who exited the show as of last Friday, came under fire initially when she tweeted "@piersmorgan I am with you. I stand by you. People forget that you're paid for your opinion and that you're just speaking your truth."

Twitter users began responding that Osbourne herself was racist for aligning herself with Morgan. This led to Osbourne engaging in a fiery argument with her co-host Sheryl Underwood, who is Black, about why people were calling her racist or why Morgan's statements were racist.

Osbourne eventually apologized for her behavior, then backtracked, even as reports about her allegedly using racist slurs with her former co-hosts resurfaced.

Morgan said that what happened to Osbourne and him was "outrageous," but it isn't really about Markle.

"She's just one of many whiny, privileged, hypocritical celebrities who now cynically exploit victimhood to suppress free speech, value their own version of the truth above the actual truth, and seek to cancel anyone that deviates from their woke worldview or who dares to challenge the veracity of their inflammatory statements," Morgan wrote.

"No, it's about a far bigger issue than one delusional Duchess . . . As Winston Churchill said: 'Some people's idea of it [free speech] is that they are free to say what they like but if anyone else says anything back, that is an outrage.'"

Speaking of prime ministers — Morgan also used his lengthy diatribe as an opportunity to tease that a political run may be on his mind. He recounted an encounter with a flower seller who allegedly stopped him on the street to say, "Piers, mate, you should be Prime Minister. We'd all vote for you. You stand up for what you believe in."

Morgan replied, "I mean, who on earth would vote for a polarising, scandalous journalist with a posh name who refuses to apologise for anything . . ." This isn't the first time Morgan has hinted at his political aspirations. In January, he told The Sun, "Listen, if it's my turn to serve, and the people want me, who am I to ignore the will of the people?" Subtle.

According to Variety, Associated Newspapers, which is the publisher of The Mail on Sunday, lost a court battle with Markle recently over a copyright dispute, although the group is appealing the judgment.