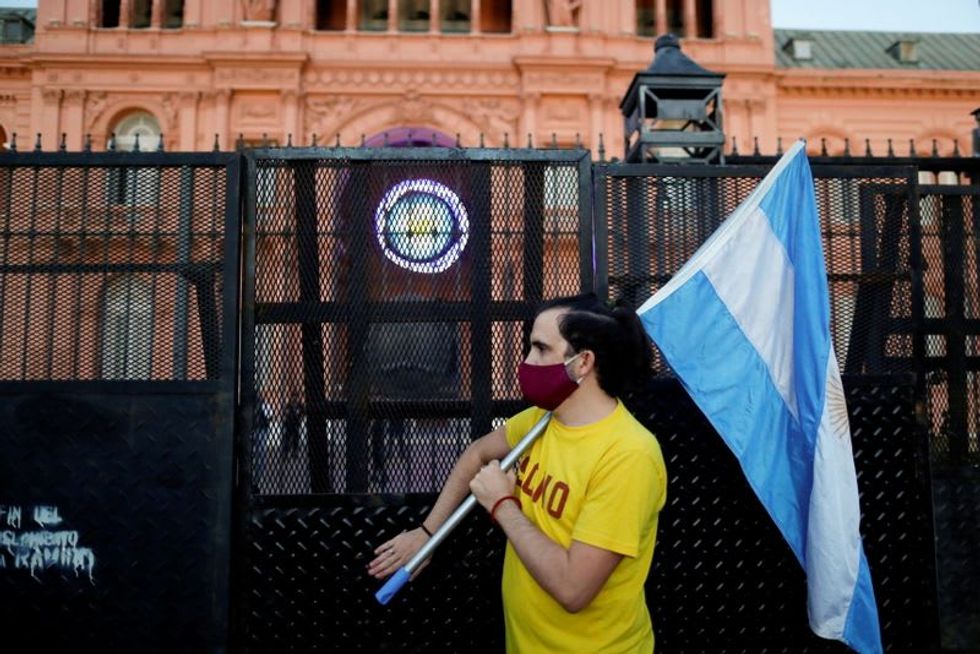 BUENOS AIRES (Reuters) - It's not a great year to go to the polls. Argentina's ruling Peronists face crunch mid-term elections in October, and pollsters say how they handle a still-raging pandemic and its fallout will be key to limiting the electoral damage.

Speeding up a stalled vaccine campaign, hit by allegations of nepotism that led a health minister to resign, could be decisive as the center-left 'Frente de Todos' coalition defends a majority in the Senate and its strong position in the lower house, where it is the largest bloc.

"Vaccines are what matters," said textile businessman Matías Pérez Montalvo, 49, who voted for the ruling administration in 2019 but said he will not in the Oct. 24 vote after shutdowns that saw schools closed for most of last year.

"That was the point where I said I do not want this (government) anymore... If we had more vaccines we would not have to go through all this again," he said.

A second wave of COVID-19 infections is hitting the grains producing country, straining hospitals and weighing on a nascent economic recovery.

But the government hopes that time is on their side as it races to seal vaccine deals, reviving talks with Pfizer Inc and pressuring AstraZeneca to speed up a supply deal, as well as counting on the continuation of regular shipments from Russia and China.

"The government will win the legislative elections on three key things: sustained progress in vaccination, the economic recovery that is gaining steam every month, and the unity of Peronism," a government source said, asking not to be named.

Argentina's economy had been slowly recovering from a heavy hit in 2020, though recent data has showed activity stalling again.

There are 127 seats up for grabs in the lower Chamber of Deputies out of 257 in total, with 24 in play out of the 72 seats in the Senate.

Pollsters expect the government to lose seats in the election, though the challenge may fall short of erasing its Senate majority.

Shila Vilker, director of consultancy and pollster Trespuntozero, said currently around 28% of voters support the ruling party, compared to 48% for the opposition, though that would likely narrow as campaigns heated up.

"This weak electoral support is really a criticism of (the government's) economic and health management," she said.

In the 2019 election, Fernandez beat his conservative predecessor Mauricio Macri by a distance, promising more state support to lead Argentina out of swirling economic, debt and currency crises that had stoked poverty.

However, sharpened by the pandemic, poverty levels have continued to climb, while state spending has depleted reserves the government needs to pay off restructured debts to private creditors and the International Monetary Fund.

A weaker Peronist hold on Congress could potentially create an obstacle to pushing through economic and judicial reforms the government hopes to get approved. Debt talks with the IMF also need the legislature's rubber stamp.

The government's strong position so far has allowed it to push though controversial bills, such as legalizing abortion.

Silvia Lospennato, a national deputy for the center-right Republican Proposal (PRO) party, which is part of the main opposition coalition, said a stronger showing for the opposition would "put a brake" on the government's more divisive proposals going forward.

Salvador Anido, 23, a student in Buenos Aires, said, however, that while the government had made mistakes in its handling of the pandemic, he would still vote for its candidates in the mid-terms.

"The government is patching up the complications left by the previous government and without hesitation I would vote for them again," he said.