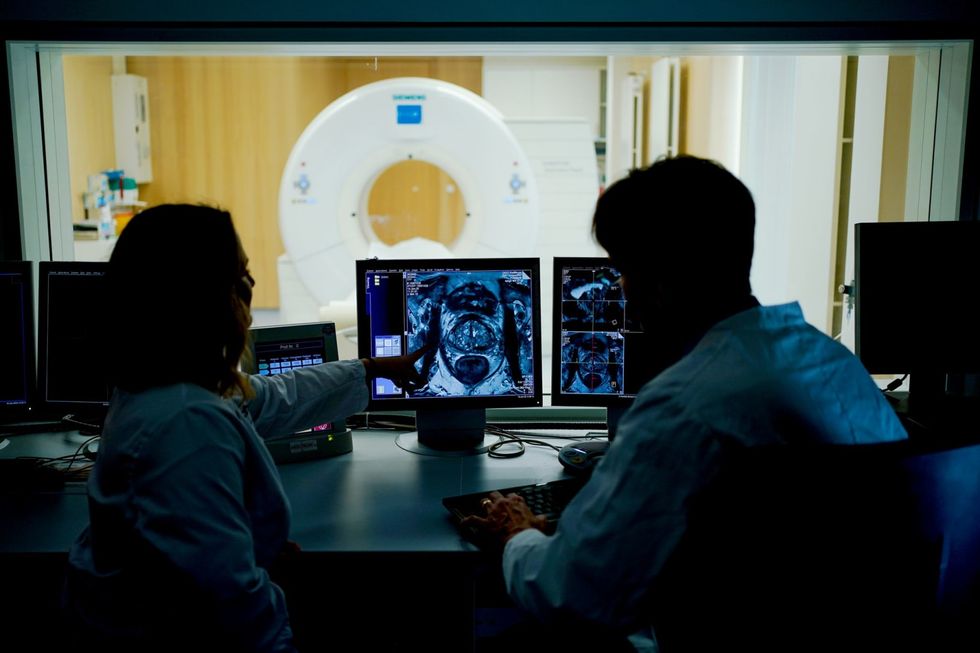 High rates of obesity mean that thousands of lives are being lost to prostate cancer, the second most common form of cancer for men, according to new research. Uwe Anspach/dpa

Thousands of lives are being lost to prostate cancer because of high levels of obesity among men, a new study suggests. More than 1,300 prostate cancer deaths could potentially be prevented every year in a country like the UK alone if the average man was not overweight, researchers said.

While obesity has been linked to other 13 cancers - including stomach, liver, pancreas and kidney cancers - the association between prostate cancer and weight has only just started to be unpicked by scientists.

The new study, which is being presented at the European Congress on Obesity in the Netherlands and published in the journal BMC Medicine, saw academics carry out fresh research as well as review previous data on the topic.

Prostate cancer is the second most common form of cancer for men, and responsible for around 375,000 deaths every year, according to the World Cancer Research Fund International.

In the new study, researchers examined data on 218,237 men enrolled in the UK Biobank study whose body mass index score (BMI), waist circumference and waist-to-hip ratio were taken when they first enrolled in the study.

The participants were tracked for an average of 12 years, with 661 men dying from prostate cancer during the follow-up period.

And they had a 6% higher risk of dying of prostate cancer for every additional 4in (10cm) on their waistline. Meanwhile researchers also performed an analysis of previous studies which examined information on almost 20,000 men who died from prostate cancer.

These studies suggested that for every five additional points on a man's BMI score they were 10% more likely to die from prostate cancer, and an additional 4in (10cm) waist size carried a 7% higher risk.

While the mechanisms behind the findings are still unknown, researchers said the study still suggests that men should try to maintain a healthy weight.

"Knowing more about factors that increase the risk of prostate cancer is key to preventing it," said Dr Aurora Perez-Cornago, from the University of Oxford, who led the research.

"Age, family history and black ethnicity are known risk factors but they are not modifiable, and so it is important to discover risk factors that it is possible to change."

Every year in the UK around 11,900 men die from prostate cancer. And the researchers said that men aged 55 to 64 have an average BMI score of 28.9 - which classes them as overweight.

Based on their findings, they calculated that if men were able to shave five points from their BMI score an estimated 1,309 fewer prostate cancer deaths would happen every year in Britain.

And they pointed out that global health leaders recommend that men should aim to have a waist circumference of 36in (92cm).

Waist circumference is used as a measure of obesity as well as a BMI score because it indicates the amount of fat built up around a person's organs.

Dr Perez-Cornago added: "More research is needed to determine if the association is biologically driven or due to delays in detection (of prostate cancer) in men with higher adiposity (body fat). "In either case, our latest results provide another reason for men to try to maintain a healthy weight."

Karis Betts, senior health information manager at Cancer Research UK, which funded the study, said: "This research looks at the likelihood of dying from prostate cancer for people who are overweight or obese, but further studies to investigate whether obesity increases the risk of developing prostate cancer in the first place are needed.

"While the jury is out on the relationship between prostate cancer and obesity, it's still important to keep a healthy weight as obesity causes 13 other types of cancer.

"However, by building on these useful findings in future, scientists can start to unpick what the mechanism of prostate cancer and obesity could be, helping them to better understand who is at an increased risk of getting and dying from the disease."

Meanwhile, a separate study published at the conference found that poor sleep may undermine a person's attempts to keep weight off. Researchers from the University of Copenhagen in Denmark examined sleep duration and quality among 195 obese adults.

Similarly, poor sleepers - measured with a self-rated questionnaire - increased their BMI score by 1.2 points after a year compared with good sleepers.

The academics found that around two hours of vigorous physical activity per week can help maintain better sleep. Another study presented at the meeting concluded that almost a quarter of obese teenagers do not know they are obese.

Data from 10 countries, including the UK, found that 24% of adolescents living with obesity do not know they are obese, yet most are worried about the effect of weight on their future health.

The survey of 13,000 teenagers, care givers and health workers found that the main barriers to losing weight for teenagers are not being able to control hunger, a lack of motivation, and enjoying eating unhealthy foods.