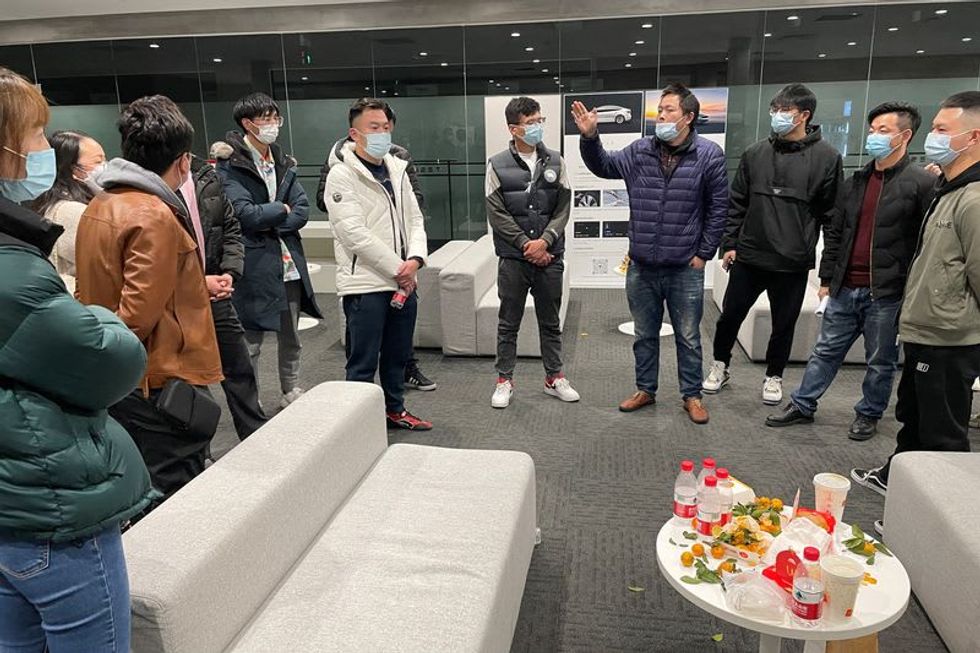 SHANGHAI (Reuters) - Dozens of Telsa owners protested at a delivery centre in Shanghai on Tuesday, vowing to raise pressure on the electric car maker after it declined to offer them rebates on price cuts the U.S. firm made last week and that they missed out on.

Similar protests by Tesla owners have sprung up in cities including Henan, Wuxi and Hangzhou in recent days, according to owners and social media posts. Tesla has faced online backlash over previous price cuts in China before but nothing as widespread as the current spontaneous protests.

The groups protesting across China were in touch with each other and would continue to press Tesla to offer them some compensation, said Damon Yu, 29, who bought a Model Y in September.

The Shanghai facility had also been a target of a spontaneous protest on Saturday, a day after Tesla moved to slash prices for the second time in three months on its Model Y and Model 3 vehicles in China.

The latest discounts, an effort to drive sales in the world's biggest electric car market after signs last year that consumption was softening, took buyers by surprise.

"We trusted the brand so much that we cancelled our orders for other brands for Tesla," said Yu, who stayed with a group of about 25 protesters at the Tesla Shanghai facility late into Tuesday evening.

Several of the owners in Shanghai said they felt misled by Tesla sales staff who had urged them to close orders and told them that they would face higher prices in the new year.

"I haven’t been able to eat or sleep," said another owner who only identified herself by her last name, Feng. She said bought her Model 3 in December after Tesla sales staff came to her house to finalize loan documents and had pressured her to close. "I cannot accept this."

Tesla did not immediately respond to a request for comment about the accusation.

Owners staking out a waiting area at the centre said Tesla had told them in a group chat on Monday that they would not be compensated. The company had told Reuters on Saturday it had no plans to offer compensation.

They demanded the company reverse the decision not to offer compensation.

A third Tesla buyer, who gave his surname as Gu, said he picked up his new electric vehicle on Monday and brought his three-year-old daughter with him to camp out at the Tesla facility all day on Tuesday in an attempt to get some of his money back.

Analysts have said Tesla's price cuts were almost certain to boost China sales, which tumbled in December, and force other EV makers to cut prices too. Tesla has also offered discounts in Singapore, South Korea, Japan and Australia.

As of Monday, Chinese customers were waiting longer to take delivery of some versions of the Model Y, the first sign the discounts were working to stoke demand.

The discounts were the first major move by Tesla since appointing its lead executive for Asia, Tom Zhu, to oversee global output and deliveries after the company fell short of its 2022 delivery target.

While established automakers often discount to manage inventory when demand weakens, Tesla operates without dealerships and transparent pricing has been part of its brand image.