'An idiocracy based on a digital prophet': QAnon longs for a fascist military dictatorship — and they want it now 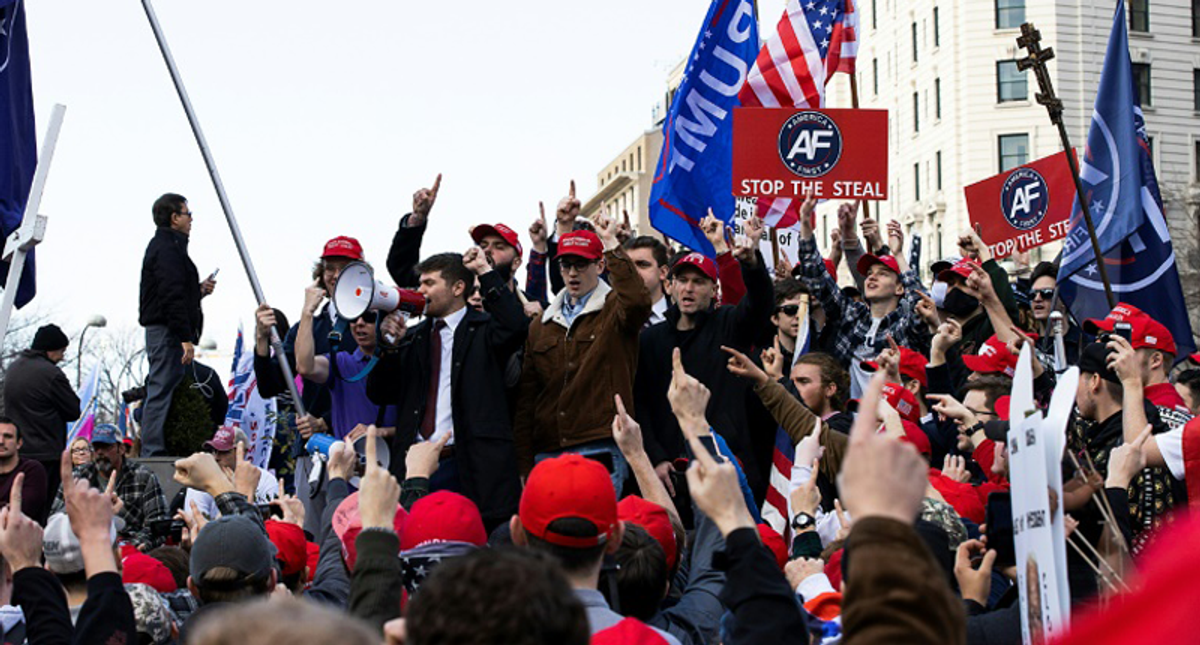 Protesters gather in Washington in support of President Donald Trump on December 12, 2020; they insisted, without evidence, that he had lost the presidential election in November only through massive fraud. AFP photo by Tasos Katopodis

Reporter Ben Collins, in an article published by NBC News' website on December 22, takes a disturbing look at QAnon supporters who are yearning for President Donald Trump to impose a fascist military dictatorship and end liberal democracy in the United States.

President-elect Joe Biden enjoyed a decisive victory in the 2020 presidential election, winning 306 electoral votes and defeating Trump by over 7 million in the popular vote. But QAnon supporters view Democrats as their enemy and have been promoting the hashtag @CrossTheRubicon — which, in QAnon terminology, means imposing a military dictatorship. And QAnon supporters, Collins reports, are urging Trump to "cross the Rubicon" and become a full-fledged dictator.

"With Trump's days in office dwindling," Collins explains, "QAnon influencers have become increasingly restless and militant — urging him to #CrossTheRubicon, a reference to Julius Caesar's crossing the Rubicon River after the Roman Senate explicitly told him not to, effectively kickstarting the Roman Civil War and Caesar's dictatorship."

To understand why QAnon believes that Trump deserves to be a full-fledged dictator, one needs to know about their bizarre and outlandish conspiracy theories. QAnon believes that the United States' federal government, especially the Democratic Party, has been infiltrated by an international cabal of Satanists, child sex traffickers, pedophiles and cannibals and that Trump has been put in the White House to fight the cabal. "Q," according to QAnon, is an anonymous figure who is providing updates about Trump's battle.

Claiming, without evidence, that the election was stolen from Trump because of widespread voter fraud, some far-right Trump supporters have been urging the president to declare martial law in order to prevent Biden from being inaugurated on January 20, 2021 — including former National Security Adviser Michael Flynn, Atlanta-based attorney Lin Wood and MyPillow CEO Mike Lindell.

"Flynn, a hero in the mythology of the QAnon conspiracy theory who once took a QAnon 'oath' on video, has said in appearances on the conservative media channel Newsmax that Trump should use the military to 'rerun' the election," Collins observes.

QAnon terminology, Collins points out, is being used by some prominent Republicans. For example, Kelli Ward, who chairs the Arizona Republican Party, has used the #CrossTheRubicon hashtag. And attorney Sidney Powell, who has been working with Wood on election-related lawsuits, has used the QAnon hashtag #TheStormIsComing, which, Collins notes, is "a QAnon phrase that refers to the extrajudicial roundup of Democrats at the heart of the theory."

According to Collins, "Some QAnon followers believe Trump is left with no choice but to declare martial law — a belief based in part on a series of wildly false news articles that have claimed that Trump is in a secret, ongoing land war with China in parts of the U.S. A series of fake news articles, YouTube videos and tweets that went viral among QAnon acolytes last week led followers to believe Trump was conducting clandestine military operations on U.S. soil."

Rep. Denver Riggleman, a Republican with libertarian leanings, has been warning about how dangerous QAnon is. The outgoing Virginia congressman, who will be replaced by far-right wingnut Rep.-elect Bob Good in January, told NBC News, "I'm losing friends and family over a straight-up cult based on anti-Semitism, fantasy and just bizarre made-up tripe. It's an idiocracy based on a digital prophet."