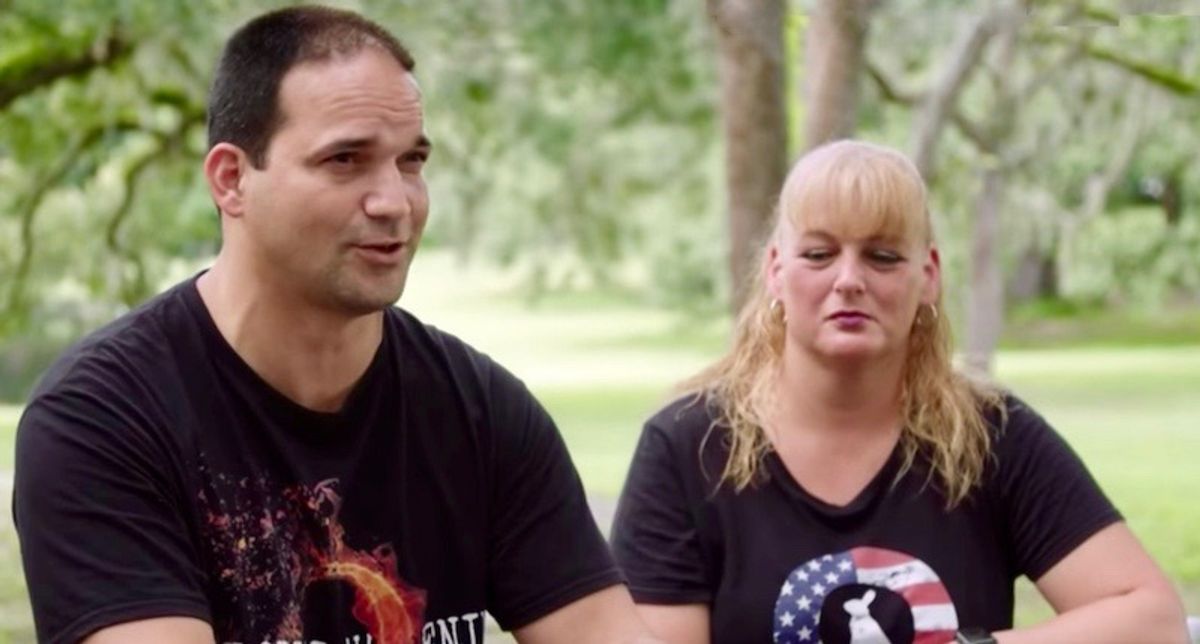 Adam and his wife were always pretty conservative. While she was an "ardent" supporter of Donald Trump, as he described, it wasn't until the November 2020 election — and nearly eight months into the coronavirus pandemic — that he started to get increasingly concerned about how deep her support for Trump ran. She was spending hours on her phone watching videos by pro-Trump conservatives like Dan Bongino and Ben Shapiro.

"I didn't have a problem with that," Adam, whose name has been changed, said in a phone interview. "But then she started to watch a lot of the QAnon conspiracy videos, and started to share those with me."

She would watch these videos until 2 or 3 in the morning, Adam said. He feared she was having a "psychotic break." Previously, she had been on antidepressants. He wondered if a mix of the pandemic and political chaos was driving her to the edge.

Then, one day, she came home and announced: "I'm going to join the militia."

Adam said he's still "emotional" about it, his voice cracking. He said he couldn't believe what he was hearing as his wife repeated QAnon talking points.

"She started to tell me that we needed to start amassing guns, that we needed to start converting our currency into gold and silver because when the Civil War happens, we need to have something to trade other people," he explained. "The adrenochrome, the pedophile rings — she was a believer that Tom Hanks was a pedophile, and it got to a point where I couldn't watch the national nightly news without her believing I was giving in to the liberals and helping mainstream media ratings by continuing to watch."

When he did watch the news, she would get so angry that she would leave the room, go to the basement, and watch more QAnon conspiracy theory videos, he said.

Adam tried to rationalize with her, and so did her two children. He begged her to see a therapist, but she refused. One morning, she woke him up early and asked him to watch a 40-minute video purporting to explain how Trump is the "world leader." He watched it, and in return asked her to watch a Vice documentary on QAnon. Again, she refused.

Finally, he gave her an ultimatum: see a professional, or their marriage was over. He filed for divorce earlier this month.

"I just have to move forward, I really wish that she could have gotten some help," he said. "I love her, I love her still."

Adam is one of tens of thousands of people who have shared their stories on r/QAnonCasualties, a Reddit group for people whose spouses, family members and loved ones have been consumed by the baseless conspiracy theory known as QAnon. The Reddit forum has become a digital support group for nearly 137,000 people who swap stories, advice and guidance. Posters on the forum reach out for support, guidance, and advice. Some posters describe the experience of completely "losing" their loved one. Others are more alarming, like the woman whose "Qhusband" got a gun license because of the conspiracy, which made her feel "sick to my stomach."

One Reddit user described their girlfriend of 10 years becoming a QAnon follower. "She refuses to believe Trump lost which is bad enough, but she won't even consider getting the COVID vaccine as she believes it will cause deadly side effects and tells me I am a sheep for getting one," the poster said. "She just [in my opinion] has become brainwashed and refuses to ever admit she is wrong with anything concerning Trump, QAnon or the vaccine. I am at the point where it is going to become a deal breaker soon. Is there any hope of saving her?"

But QAnon's effect on families extends far beyond the capabilities of one Reddit support group. QAnon-related strife is overwhelming professional therapists. Daniel Shaw, a psychoanalyst who specializes in cult recovery, said he gets between two and three calls a day from people looking for help for their loved ones. Sometimes, the person is seeking help for a spouse who has become a QAnon follower. Other times, it's for a parent.

"I've never seen anything like this before, and I've never had as many calls like this," Shaw said.

One woman, who asked to remain anonymous, is struggling with her husband since he became a QAnon adherent. In a phone interview, she said he was always into pseudoscience, but his obsession with QAnon is beyond anything she's ever observed.

"He has fallen real hard for it, more so than anything he has been into before," she said. "That's what he does every single evening — he reads stuff about it, and if he wants to talk to me that's all he wants to talk about," she said. "So we're just not spending a lot of time together — we meet together to take care of our children, then he goes to work and I'm home with the baby."

One night, she found him crying in the kitchen because of the "children," as he explained. One of QAnon's biggest baseless conspiracy theories, known as #SaveTheChildren, dates back to Pizzagate— a completely false theory that emerged in 2016, claiming that Hillary Clinton and John Podesta, her former campaign manager, operated a child sexual abuse ring. Conspiracy theorists peddled the false claim that Podesta's use of the word "pizza" in the emails meant pedophilia; the email exchange surfaced when WikiLeaks published Podesta's hacked emails. Four years later, there is still no evidence that there is any child sex–trafficking ring, or evidence of the other misinformation the conspiracy theory has generated.

"I'm actually going behind his back now — I wish I didn't have to, but it's a matter of my children's health," she said. "You have to keep things from your spouse, like that you're going to a doctor's appointment, and that doesn't seem right."

Shaw said having a marriage, or any type of relationship, with a QAnon follower can be very challenging because most of them are no longer grounded in reality.

"Partners are used to having a rational, logical, partner, and suddenly they do not," Shaw said. "This speaks to the extent to which some QAnon believers lose touch with reality altogether, and refuse to be willing to make contact with any other reality . . . the creation of this completely alternate reality has completely taken over their imagination and it becomes an obsessions, and fuels an enormous amount of paranoia, and this loss of touch with reality is not what most spouses are used to seeing in their partner."

Shaw said it takes an "enormous amount of empathy, love, patience and persistence" to get through to a loved one who has fallen for QAnon.

"You cannot directly confront them, try to attack them, prove in a legalistic way that their ideas are false," he said. "None of those things work, they just backfire — and it's not normal for a partner to have that kind of gentle and caring approach when something so crazy is going on."

Melissa Rein Lively is a former QAnon adherent who has been outspoken about how she was drawn in. Lively said she fell into the conspiracy theory by way of "spiritual influencers" that she followed online. It all culminated with her having a breakdown at Target that went viral, and nearly ruined her marriage.

"It absolutely ripped our marriage apart and drove us to the brink of divorce," she said. "I've been in a lot of therapy with my husband and we've worked through our relationship, and we've come through stronger because of it, but I will regret for the rest of my life the day I sat there and looked at my husband and face and said 'I choose QAnon over you.'"

Two self-identified Proud Boys have been involved in the internal planning for a set of simultaneous "White Lives Matter" rallies scheduled for Sunday, according to chat logs leaked to the media.

The association with the White Lives Matter rallies, which are promoting overtly white supremacist messages about a supposed white genocide, is a liability for the Proud Boys, a violent proto-fascist group that claims to be non-racist. The leaked chats show that a Proud Boy responsible for organizing the Michigan White Lives Matter rally went to some effort to hide the fact that members of his group are involved in the effort.

Republicans are in a panic over Joe Biden's popular American Jobs Plan.