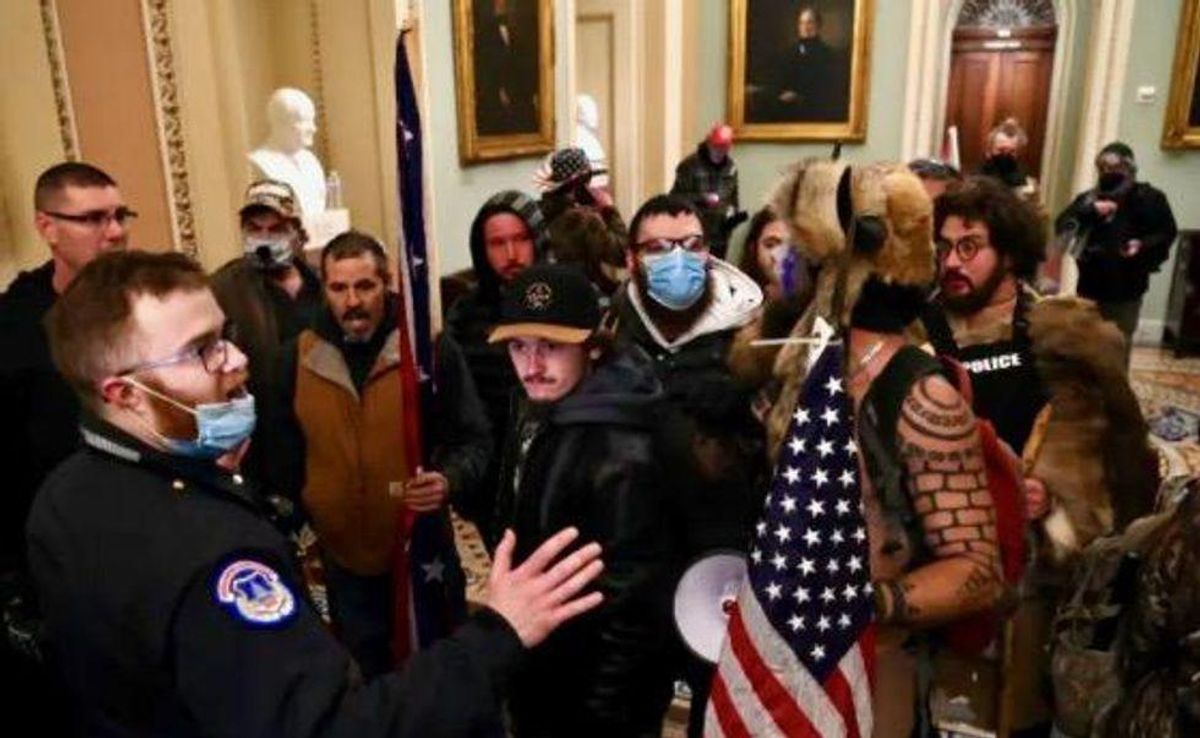 That's right. You can't imagine that. It's not possible. So why is Kevin McCarthy, the House minority leader, coming out this morning against a similar proposal to investigate the January 6 sacking and looting of the United States Capitol? Not as many people died, of course, but the insurrection was worse than 9/11 in that it was an existential threat to the democratic faith, the Constitution and the republic itself. An attack worse than 9/11 deserves a bipartisan commission similar to 9/11's, right?

You'd think so, but McCarthy is shielding from scrutiny the man most responsible for planning, organizing and leading the insurgency. He's doing that because his party is clinging to a losing president like it's given up hope of returning to power through valid democratic means. Most people are paying attention to state-level Republicans squeezing electorates to prejudicial sizes. Less attention is being paid to terrorism as a Republican option. The takeaway to today's news should be the terrorist attacks on September 11, 2001, might've been tolerable had Osama bin Laden been a Republican.

Make no mistake. McCarthy's reasoning isn't persuasive. The Republicans pushed for and launched dozens of investigations into the Benghazi attack of 2012, during which four Americans were killed, with the goal of undermining trust in Hillary Clinton, who was then secretary of state. They spent millions to conclude she wasn't responsible. It might have been funny had their mission gone nowhere. But from those investigations came revelations that Clinton used a private email server to conduct official business, a scandal the Russians exploited in 2016 to sabotage her presidential candidacy.

I continue to believe, perhaps naively, that most Americans would choose democracy and loyalty without a second's reservation over treason and tyranny if the choice were clear to them. I suspect Kevin McCarthy believes this, too. That's why the GOP leader and (I have no doubt) nearly all the House Republicans will vote soon enough against a proposed commission to investigate the January 6 attack despite the fact that a whole bunch of them, including McCarthy, pushed for and launched dozens of investigations into the Benghazi attack of 2012. Standing in the way muddies the water, as it were. It prevents Americans of good conscience from making a clear and patriotic choice.

It does something else, though. It covers their asses. Kevin McCarthy and the rest of his conference must know any formal investigation into the terrorist attack of January 6 has a high likelihood of finding its way back to them. At the very least, it would remind people that most of the House GOP voted against counting electoral votes after the insurgency, as if indifferent to acts of domestic terrorism. It would remind voters all but 10 voted against impeaching the former president. They are, therefore, doing far more than shielding Donald Trump. They are shielding themselves. In this sense, the Republicans are involved in what can accurately be called a conspiracy of silence.

Again, I suspect Kevin McCarthy probably thinks standing in the way of a bipartisan investigation prevents Americans of good conscience from making a clear and patriotic choice. But it does the opposite. There's just no good reason to stand in the way unless you fear what the investigation is going to find. And if it appears that you fear what it's going to find, Americans of good conscience have good reason to put more of their faith in the party standing against terrorism than in the party seeming to think terrorism is an option in a democracy when all other democratic options have failed.

I said 9/11 might've been tolerable had Bin Laden been a Republican. I'm (mostly) kidding to make an ominous point. I think the Republicans are betting that most (white) Americans are as cynical as they are—that they have lost so much faith in American democracy, and what it's capable of producing for the betterment of all, that they are ready to stop believing in doing the right thing for its own sake. In this sense, terrorism isn't the problem. The problem is who's doing it. If it's Osama bin Laden, or other nonwhite people here and abroad, it's bad. If not, it's good, or at least defensible, because, I mean, let's be honest, those people would murder us all if they could. Instead of asking Americans to choose their values, the GOP is asking them to pick their poison. We have better options. The question is whether we see them clearly.