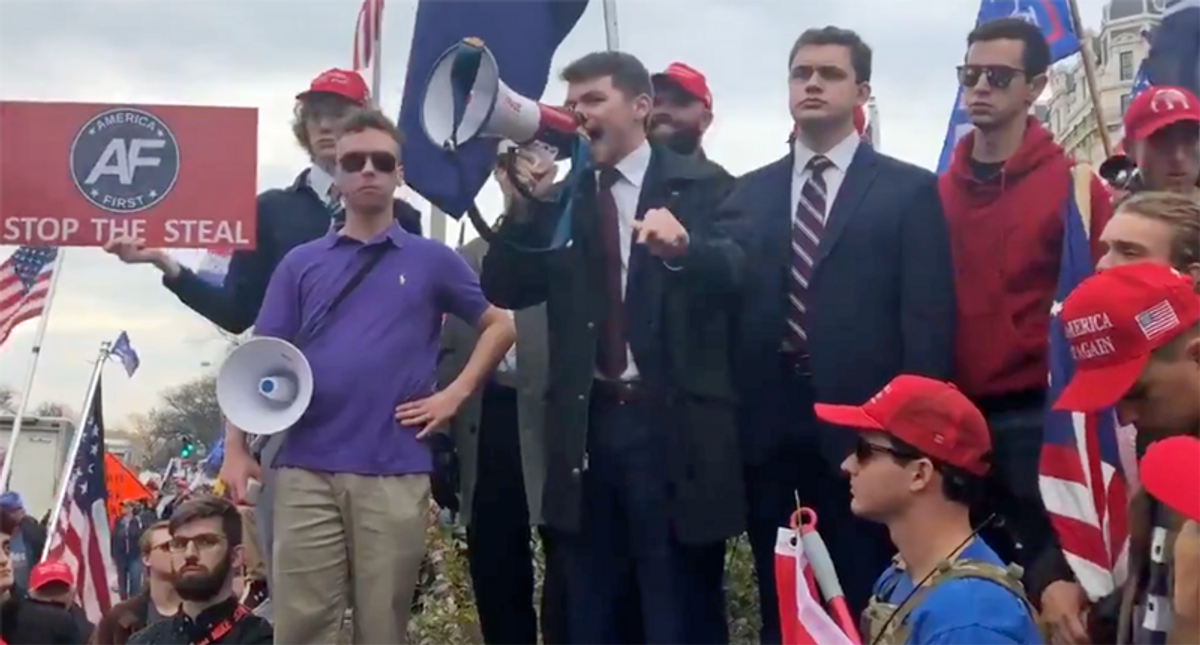 These claims wither away under any serious empirical investigation or historical inquiry — that's why they are myths. It is not facts which give myths the force of meaning but rather the way people internalize them and make them true for themselves and the larger community.

Even the more sophisticated popular understandings of American history that include the fact that the country is a racial settler state, founded on the evils of genocide against First Nations people and the enslavement of Black people, in which "white democracy" was the ideal norm, still emphasize an arc of progress and positive change. In those more nuanced stories, America is an "imperfect union" that is always striving, however difficult and complicated the work may be, to become a better nation.

The Age of Trump shattered many of these myths. It revealed that fascism is not something "over there," but a toxic weed that can blossom in the United States. Black and brown folks and other marginalized people already understood this fact: White supremacy is itself a form of racial fascism and authoritarianism. Such an understanding has been obligatory for their survival.

But many white Americans and others who have bathed in the privilege of racial innocence were gobsmacked by the Trump regime's relentless attack on the country's democracy, rule of law, civil society, and governing norms and institutions.

Tens of millions of other Americans, the vast majority of them white, were shocked in a different way by Trump's ascent and what it wrought: It was a revelation and a dream come true. A leader and defender of "white civilization" and "real America" had finally arisen to speak for and protect "people like them."

In so many ways, the calamity of the Age of Trump has seen the story of inherent American progress, the goodness of its people and the permanence of the country's democracy run into a brick wall.

The American people can no longer deny that political monsters are real. These monsters want to overthrow America's secular and multiracial democracy and replace it with an American apartheid plutocracy. The monsters want to take away the basic human and civil rights of nonwhite people, women, LGBT people, immigrants, liberals and progressives, along with any other groups they deem to be "un-American" and "the enemy." Across the country, this monstrous agenda is well underway. For all of the Biden administration's early successes, they occur under the ominous shadow of a right-wing terrordome, now nearing completion for 2022 and 2024 and beyond. Trump's coup attempt and his followers' attack on the U.S. Capitol on Jan. 6 is but a preview of what is to come.

The alarm about America's monstrous politics is being rung loudly. How will the American people respond?

Writing at the Daily Beast, Wajahat Ali describes these right-wing monsters and their agenda:

There is no civil war in the Republican Party — the Confederates won long ago.
Instead, we are witnessing the end of a long molting process as the GOP slithers into its final form: a counter-majoritarian, fascist entity.
Republicans are shedding their masks and hoods, spitting out their dog whistles and outright embracing the Big Lie and the violent insurrectionists, conspiracy theorists, and racists who make up the party's base and, increasingly, its representatives in Congress. …
Trump was not a cancerous growth but the end product of the party's decades-long molting process. He's the beating heart. He's Republicans' orange avatar, their unrestrained id, their boiling, festering rage that quenches its appetites while securing power and wealth by any means necessary. Democracy, rule of law, equality, fairness, voting rights are all unnecessary and cumbersome obstacles that must be either removed or weakened to achieve the ultimate goal: power for an overwhelmingly white, Christian conservative minority….

The Republican Party a few outliers like Rep. Liz Cheney and Sen. Mitt Romney belonged to "is dead," Ali writes. "It's over. Gone." The "final molting stage" of the new party will produce an entity that openly supports "violent insurrections, lies, conspiracy theories, authoritarians, and racists," and "will attack democracy, voting rights, the rule of law, our allies and the truth."

In another important recent essay, Thom Hartmann warns that the Jim Crow Republican Party and Trump's neofascist movement are led by psychopaths and encourage antisocial behavior:

There's something fundamentally different about psychopaths. And the failure to recognize that goes to the core of the crisis within the Republican Party — which has become a magnet for such people — and our overall political system today….
For America to survive as a democratic republic, we must restore the legal guardrails that keep psychopaths from entering, controlling or buying our political process. And we must hold the obvious psychopaths and their enablers — the Former Guy and those in Congress who encouraged and continue to baldly lie about the January 6th insurrection attempt — to account.
To reduce the power of psychopaths in politics, we must pass the For The People Act or similar legislation that psychopath-proofs our political system. We must stop them from continuing their efforts to rig the 2024 election.

Umair Haque reminds us that the monstrous politics that have taken over the Trump-controlled Republican Party are also global in scale, addressing the strange political self-immolation of the British working class, long a reliable vote for left-wing parties and candidates, but now "voting for its own self-destruction":

If you're working class, you need the following things: healthcare, retirement, affordable education, childcare, housing, and so on. The British working class began to flip conservative in 2007, and is now solidly ultra conservative. Why is that? Because the conservatives have convinced them that demonizing and scapegoating everyone else — foreigners, immigrants, all those hated "metropolitan elites," Europeans — for the lack of a functioning society matters more than having a functioning society.
It's important to call this what it is. Stupidity. Folly. Idiocy. There is no other word for it, and words shouldn't be minced. …
The problem isn't the Labour Party, and it's not politics at all. It's people. Brits have become violent, selfish, backwards idiots. You know how the American Idiot is a legendary figure around the world? Welcome to the British Buffoon. He's a figure that doesn't care about anything, will accept any level of indignity, any collapse in living standards — as long as he gets to wave the Union Jack, shake a fist at the world, and sing Brittannia Uber Alles….
What happens when people fail at democracy like this? Well, it's pretty simple. Democracy fails. A society becomes a failed state. Not in the way we're used to thinking of it — there's a coup, there's a revolution, the army rolls in, the government collapses. But in a softer, altogether more dangerous way. Consensually. A country commits suicide as a modern, functioning society not with a bang, but with a million whimpers, shrieks of rage, howls of xenophobia, guttural snarls of nationalism. And soon, there's nothing left but poverty, despair, rage, and hate.

The Age of Trump was and remains a type of cruel tutelage for the American people on the reality of political monsters and monstrous political movements. These truths cannot be wished away or made to disappear. These anti-democratic, antisocial and anti-human politics must be confronted and defeated.

To accomplish that goal, American neofascism and Trumpism must be described using the moral language of right and wrong, good and evil. Without the correct moral language, civic evil is reduced to a question of "both sides" and "differences of opinion" and "just politics" instead of being understood as an existential threat.

The American people are quickly running out of time to save their democracy and themselves.

They must put aside childish, fairytale beliefs about the country's past, present and future. To this point, there is no clear indication that they possess the maturity to do such a difficult thing. The monsters are watching and waiting.