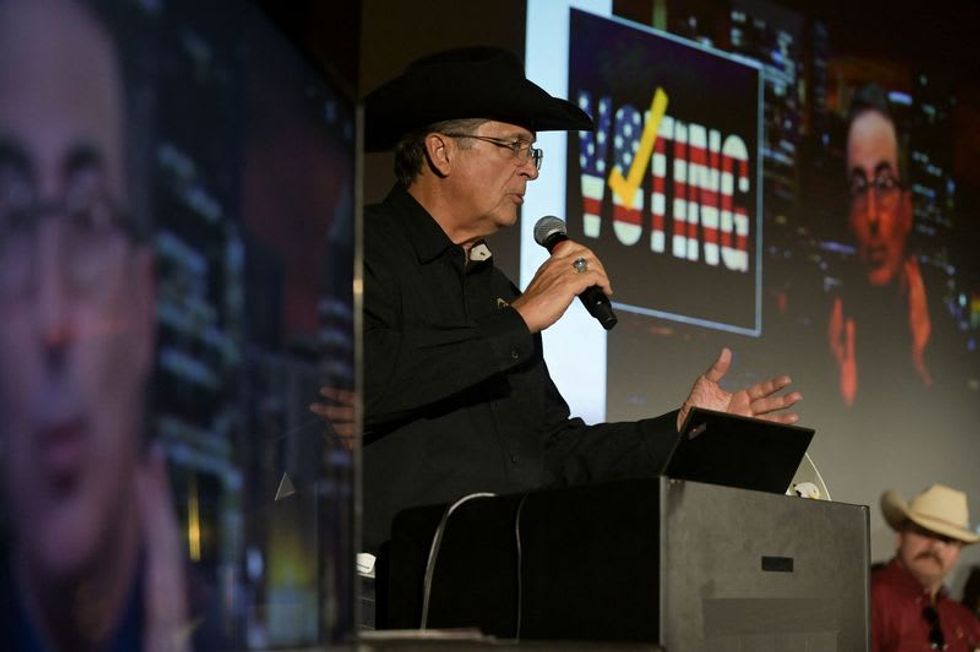 By Peter Eisler and Nathan Layne

(Reuters) - A coalition of rightwing “constitutional sheriffs,” who claim legal power in their jurisdictions that exceeds U.S. federal and state authorities, has a new calling: investigating conspiracy theories that the 2020 election was rigged against former President Donald Trump.

The Constitutional Sheriffs and Peace Officers Association has teamed with True the Vote, a Texas nonprofit and purveyor of debunked voter-fraud claims, to recruit like-minded sheriffs nationwide to investigate 2020 stolen-election allegations and to more aggressively police future voting.

The partnership, detailed last week at the association’s annual gathering in Las Vegas, aims to intensify a movement already underway. At least four ideologically aligned county sheriffs in Michigan, Wisconsin, Kansas and Arizona have launched election-fraud probes since the 2020 vote. None has established evidence of systemic fraud.

“This is our top priority. It’s our duty,” Richard Mack, founder of the constitutional sheriffs organization, told Reuters in an interview at the Las Vegas meeting. Mack also touted the True the Vote partnership later in the week at FreedomFest, a national gathering of libertarian-leaning thinkers and political figures, where he urged that sheriffs “join us in this holy cause.”

Election officials are raising concerns that partisan investigations by sheriffs into baseless voter-fraud claims could undermine public confidence in elections. In an interview, Michigan Secretary of State Jocelyn Benson, a Democrat, called such probes part of a "nationally coordinated effort to dismantle democracy through lies and misinformation, and through people misusing or abusing their authority."

False fraud claims have also sparked a wave of threats against election administrators, including more than 900 hostile messages documented by Reuters https://www.reuters.com/investigates/section/campaign-of-fear, along with at least 17 attempts to illegally access voting equipment https://www.reuters.com/investigates/special-report/usa-election-breaches in search of evidence to prove election-rigging.

Officials with True the Vote said at the constitutional sheriffs’ meeting that they plan to raise money to provide grants and equipment to help sheriffs investigate 2020 voter-fraud claims and expand surveillance of ballot drop boxes in future elections. Trump supporters have alleged, without evidence, that drop boxes enabled the mass collection of fraudulent votes in the presidential election.

While election fraud is exceedingly rare, some states with Republican-controlled legislatures have passed new laws in response to the false rigged-election claims. Nine states have banned drop boxes or restricted their distribution since the 2020 vote, according to a recent report by the Voting Rights Lab, which monitors state election policies. Other states have enacted more stringent voter-registration requirements. In Florida and Georgia, lawmakers expanded the powers of law enforcement to police election-law violations.

The constitutional sheriffs’ new focus on probing elections illustrates how Trump’s voter-fraud falsehoods have found a receptive audience in some corners of law enforcement.

Leaders of the movement touted the recent documentary “2000 Mules” as they gathered in Las Vegas. The movie, based on cell-phone tracking data and surveillance video obtained by True the Vote, alleges that Democratic operatives stuffed drop boxes with fraudulent ballots in key counties to deliver the presidency to Democrat Joe Biden.

“2000 Mules has presented overwhelming evidence," said Mack, urging sheriffs to investigate its fraud claims. “It cannot not be dismissed.”

Many Democratic and Republican officials, along with independent fact-checkers, have in fact dismissed the movie as misleading and its evidence as flimsy.

The constitutional sheriffs’ association promotes an extreme view of sheriffs’ legal authority, asserting on its website that their power in their jurisdictions exceeds that of any other official and “even supersedes the powers of the President.”

It’s rare for sheriffs to investigate voting irregularities, especially without a request from election officials. They generally handle criminal law enforcement in jurisdictions that lack a police force and manage local jails, among other duties.

True the Vote founder Catherine Engelbrecht said at the Las Vegas meeting that sheriffs are the best hope for pursuing rigged-election claims because other agencies, including the Federal Bureau of Investigation (FBI), have dismissed its allegations.

“It's like the lights went on,” she said. “It's the sheriffs: that's who can do these investigations; that’s who we can trust; that's who we can turn over information to.”

The FBI did not respond to a request for comment.

Mack, who founded the constitutional sheriffs association in 2011, is a former county sheriff in Arizona. He served until 2016 as a board member of the Oath Keepers, an anti-government militia that includes several members charged with helping to organize the Jan. 6 U.S. Capitol attack. Mack told Reuters that he left the Oath Keepers when the organization became too militant, but extremism researchers have documented ongoing ties https://www.irehr.org/2022/07/15/shoulder-to-shoulder-cspoa-and-the-oath-keepers between his association and the militia group.

True the Vote officials described the coalition as a multi-faceted effort to encourage sheriffs to pursue election-fraud claims. In addition to grants meant to help sheriffs conduct surveillance of drop boxes, the group said it aims to provide sheriffs with “artificial intelligence” software to assist in analyzing the video they collect. True the Vote also plans to set up hotlines to alert sheriffs to suspicious activity at polling stations and ballot drop boxes.

It’s unclear how many of the nation’s sheriffs will join the effort. The constitutional sheriffs association does not disclose membership numbers; Protect America Now says it includes about 70 sheriffs from more than 30 states.

Political Research Associates, a left-leaning think tank that studies political extremism, has identified 136 sheriffs who align with the so-called patriot movement, which includes constitutional sheriffs and others embracing anti-government or far-right conspiracy theories.

The National Sheriffs Association, the nation’s leading professional organization for sheriffs, did not respond to requests for comment on the effort to pursue election-fraud allegations.

Calvin Hayden, sheriff of Johnson County, Kansas, told the Las Vegas gathering that he plans to employ technology to expand his investigation.

"We’re going to start doing our geodata," Hayden said. "I have no question that we’re going to get to the bottom of this."

Hayden launched the probe last year despite repeated assurances from county and state election officials that the vote had been conducted fairly. Asked what evidence justified the probe, a spokesperson for Hayden’s office, Shelby Colburn, said the investigation was based on more than 200 tips from voters and that the sheriff would soon provide more details.

Hayden’s efforts were praised by Mack, who told meeting attendees that election fraud had become the constitutional sheriff’s association’s “biggest concern.” He said his members are uniquely positioned to pursue the matter because sheriffs “don’t have to ask permission from anybody to start an investigation.”