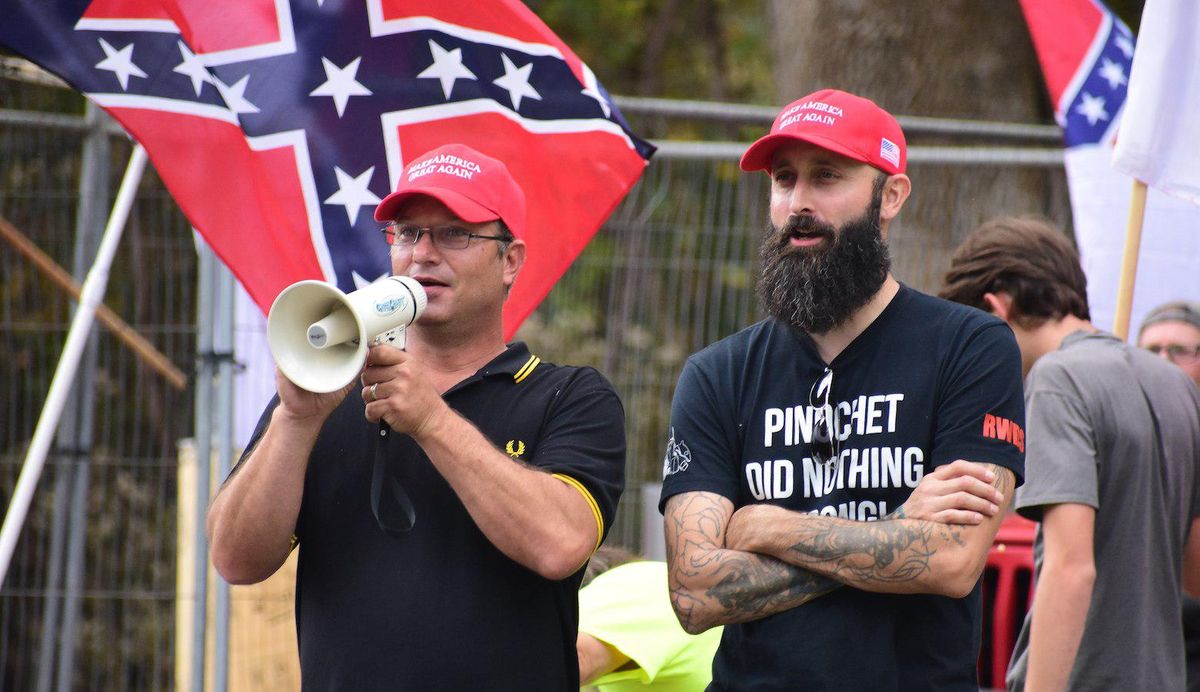 Far-right conspiracy theorists are not a new phenomenon. The late conservative National Review founder William F. Buckley famously railed against the John Birch Society during the 1960s, denouncing them as extremists who he believed were bad for the conservative movement. But during the Trump era, far-right conspiracy theorists have become increasingly prominent — and experts on domestic terrorism and national security, according to National Public Radio's Hannah Allam, fear that the number of violent attacks could escalate.

"Domestic terrorism analysts are raising concern about the security implications of millions of conservatives buying into baseless right-wing claims," Allam reports. "They say the line between mainstream and fringe is vanishing, with conspiracy-minded Republicans now marching alongside armed extremists at rallies across the country."

Allam notes that during a recent online conference for the group Millions of Conversations, Mary McCord — a former federal prosecutor who now teaches law at Georgetown University in Washington, D.C. — warned, "This tent that used to be sort of 'far-right extremists' has gotten a lot broader. To me, a former counterterrorism official, that's a radicalization process."

Another person who spoke at that online conference was Elizabeth Neumann, a former U.S. Department of Homeland Security official. Although Neumann is conservative, she has become a vehement critic of President Donald Trump and supported former Vice President Joe Biden in the United States' 2020 presidential election. Neumann warned, "Breaking through that echo chamber is critical — or else, we'll see more violence."

Although President-elect Biden enjoyed a decisive victory — winning 306 electoral votes and defeating Trump by over 7 million in the popular vote — the president received 74 million votes. And Allam notes that counterterrorism experts are wondering how many of those 74 million Trump voters are buying into far-right conspiracy theories.

Allam explains, "Political conspiracies drew thousands to last weekend's pro-Trump rally, after which the Proud Boys and other violent extremist groups wreaked havoc in Downtown Washington, D.C…. While it's impossible to pin down the scope of such beliefs, analysts say, the numbers are staggering if even a fraction of President Trump's more than 74 million voters support bogus claims that say, for example, the election was rigged, the coronavirus is a hoax, and liberals are hatching a socialist takeover."

Kori Schake, formerly a senior adviser for the U.S. Department of Defense and the National Security Council, told those attending Millions of Conversations' online event, "It really matters that the president of the United States is an arsonist of radicalization. And it will really help when that is no longer the case."

Kruglanski warned, "Every large political movement started at one point as a small fringe minority. And when it catches on, it can engulf the whole society. So, you know, the danger is there."

Camped out in bare offices, President Joe Biden's new White House team has spent its first three days scrambling for things like binder clips and IT support -- oh, and trying to save the country from multiple crises.

They took over leadership of the world's most powerful, wealthy and innovative nation on Wednesday. But after a nasty transition period from the Donald Trump administration, incoming staff face some of the problems an ordinary renter might face in a new apartment.

House Minority Leader Kevin McCarthy (R-CA) is facing withering criticism for telling an interviewer that every American shoulders part of the blame for the Jan. 6th storming of the U.S. Capitol by right-wing extremists urged on Donald Trump.

According to a report from HuffPost, McCarthy made his comments in an interview to be shown this Sunday on "Full Court Press With Greta Van Susteren," saying Trump bears some responsibility, before adding, "I also think everybody across this country has some responsibility."

That set off a flurry of criticism from critics accusing the Republican leader of trying to point the finger elsewhere for the MAGA-inspired coup attempt that led to five deaths.

In his first call to a foreign leader as US President, Joe Biden spoke with Canadian counterpart Justin Trudeau Friday on a number of topics and made plans to continue the conversation next month, Ottawa and Washington said in separate statements.

During the conversation, which Canada said lasted approximately 30 minutes, the two leaders covered everything from the coronavirus pandemic, which has led to the closure of the US-Canada border since March, to environmental protections.