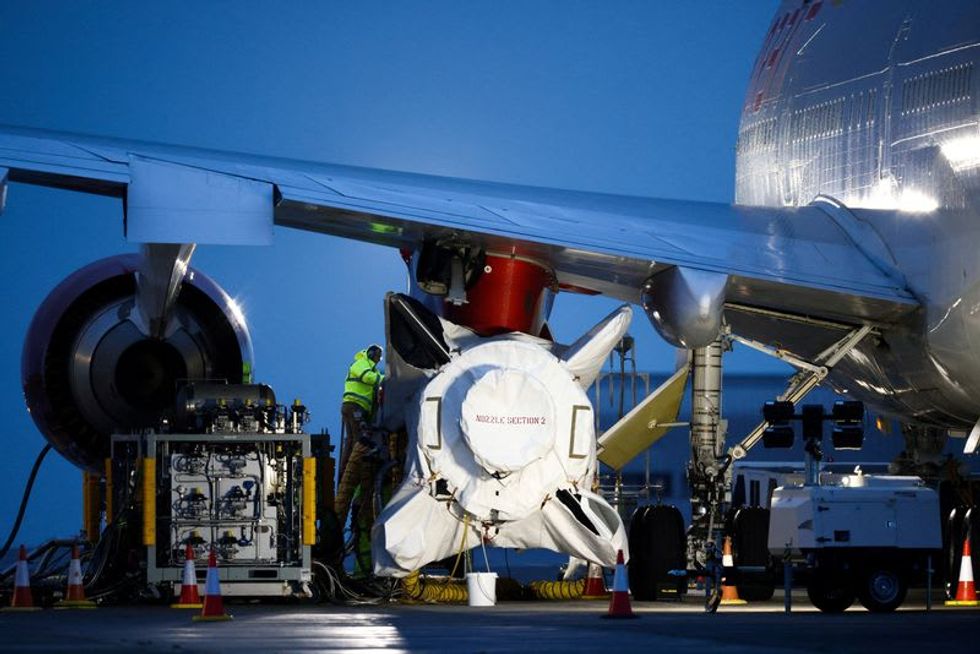 NEWQUAY, England (Reuters) -Virgin Orbit's LauncherOne rocket blasted into orbit late on Monday after it was released from its carrier aircraft, a key stage in Western Europe's first satellite launch from the coastal town of Newquay in southwest England.

The rocket detached from the wing of a modified Boeing 747 over the Atlantic Ocean, at about 35,000 feet (10,670 meters). Nine small satellites will be deployed from the vehicle.

Heralded by the British government as the birth of a home-grown space launch industry, more than 2,000 enthusiasts had gathered to cheer when the "Cosmic Girl" aircraft lifted from the runway in the seaside resort.

Virgin Orbit, part-owned by British billionaire Richard Branson, said the satellites would be deployed into lower Earth orbit (LEO) in its first mission outside its United States base.

The company tweeted that LauncherOne had successfully reached Earth orbit around seven minutes after it was released from "Cosmic Girl".

The "horizontal" launch in Newquay - population 20,000 and famous for its reliable Atlantic waves - enabled Britain to beat Sweden, Norway and others in launching orbital satellites.

"We are sending a big signal tonight that we are intent on being a force in the space economy of tomorrow," he told Reuters before take-off.

The new spaceport will launch small satellites at a critical time after the Ukraine war cut access to its use of Russian Soyuz vehicles. The European Space Agency's (ESA) Ariane 6 rocket, which launches from Kourou in French Guiana, is designed to carry large satellites and has also had delays.

The Ukraine war has highlighted the importance for tactical military purposes of smaller satellites, like those being launched from Newquay, which can get into low orbit at much shorter notice than bigger ones.

The UK Space Agency said it would be a moment of national pride for Britain's growing space industry.

Deputy Chief Executive Ian Annett said more small satellites were built in Britain than anywhere other than the United States.

"So we have the full spectrum except launch," he told Reuters. "If you have launch, you have everything."

The mission, called "Start Me Up" after the Rolling Stones track, will deploy breakfast cereal boxes-sized satellites to fulfil tasks such as maritime research and detecting illegal fishing, as well as national security, Virgin Orbit said.

The company has previously launched from California. Chief Executive Dan Hart said the protocols would stay the same, joking to reporters: "Pasties versus hamburgers, it's a significant shift."

He added that partnerships with the UK Space Agency, Spaceport Cornwall, the British aviation regulator and the Royal Air Force had made the launch possible.

Space enthusiasts with tickets for the launch secured positions in a viewing area as rock group Europe's "Final Countdown" blasted from loudspeakers on Monday evening.

Retired teacher Pauline Clifton, who had come from Falmouth in the south of the county, said she was always confident that the spaceport would come to fruition. "To be leading the way in anything is quite something for Cornwall," she said.

Virgin Orbit's focus on LEO satellites is at the other end of the scale from the large satellites in geostationary orbit that are launched by vertical rockets.

But he said smaller satellites were also doing vital research in climate change, and they were a growing opportunity for an industry employing 47,000 people and worth 16.5 billion pounds ($20.09 billion) a year in Britain.

Getting the mission off the ground has taken time. It was delayed from late last year due to the myriad regulatory clearances needed for the inaugural flight.