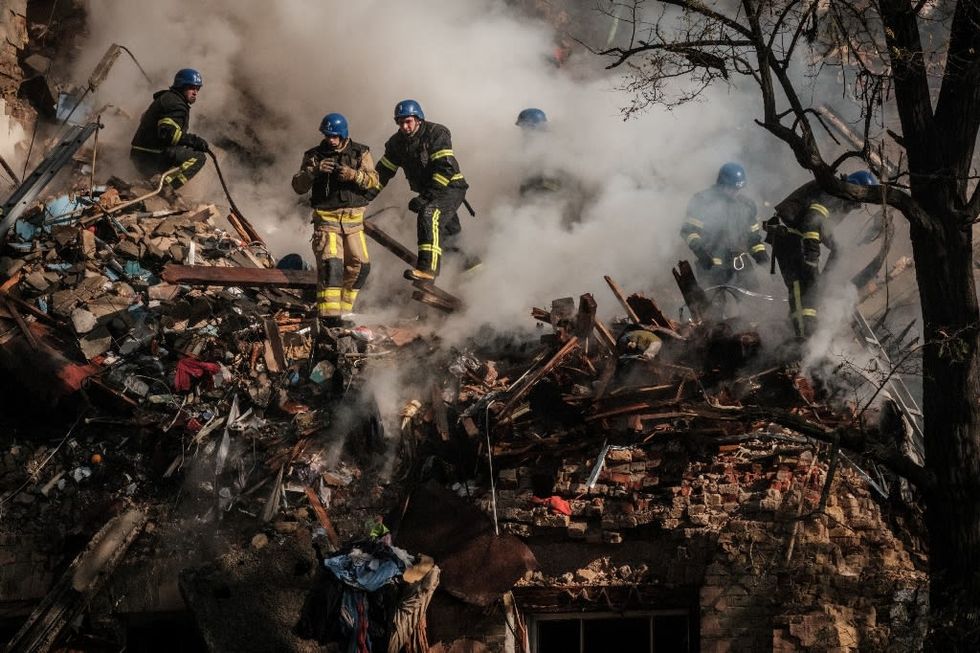 Ukrainian firefighters work on a destroyed building after a drone attack in Kyiv on October 17, 2022

Kyiv (Ukraine) (AFP) - Russia announced the evacuation of civilians from a key southern Ukrainian city Tuesday as it acknowledged the situation for its troops on the ground in Ukraine was "tense" in the face of a counter-offensive.

Ukrainian officials, meanwhile, scrambled to rebuild damaged energy facilities across the country following a series of deadly Russian strikes and President Volodymyr Zelensky charged that Moscow's purported use of Iranian-made drones in the attacks highlighted its "military and political bankruptcy".

Russian General Sergey Surovikin, who has been in charge of recent operations in Ukraine, said the army was preparing to evacuate civilians from the city of Kherson, which is part of the four regions in Ukraine that Moscow recently claimed to have annexed.

Kherson was the first city to fall to Russian forces after the Kremlin launched its invasion on February 24, but Ukrainian troops have been pushing increasingly closer to the city in recent weeks as part of a successful counter-offensive.

"The Russian army will above all ensure the safe evacuation of the population" of Kherson, Surovikin told state television Rossiya 24, describing the situation as "very difficult" both for civilians and Russian soldiers.

"The enemy is not abandoning its attempts to attack Russian troop positions," he added.

And Vladimir Saldo, the Kremlin-appointed head of the Kherson region, announced on Telegram "an organized relocation of civilians" from several of the region's municipalities to the left bank of the Dnipro river.

Ukraine warned of an emerging "critical" risk to its power grid after repeated Russian bombardments had destroyed one third of the country's power facilities as winter approaches, according to the presidency.

"The situation is critical now across the country. It's necessary for the whole country to prepare for electricity, water and heating outages," Kyrylo Tymoshenko, deputy head of the Ukrainian president's office, told Ukrainian television.

Drones also bombarded Kyiv on Monday, leaving five dead, officials said, in what the presidency described as an attack of Russian desperation after a string of battlefield losses.

Kyiv and its Western allies have accused Moscow of using Iranian-made drones in the strikes, a move Zelensky portrayed as a sign of Russia's failure.

"The very fact of Russia's appeal to Iran for such assistance is the Kremlin's recognition of its military and political bankruptcy," Zelensky said in his daily address.

Many towns and cities in the Zhytomyr region, west of Kyiv, and parts of the city of Dnipro in central Ukraine were without electricity, leaving some hospitals to operate on backup power.

National emergency services said that after 10 days of strikes on energy facilities, over 1,100 towns and villages in nine regions had been left without power and more than 70 people were killed and 290 injured.

Kyiv on Tuesday also accused the Red Cross of "inaction" over its prisoners held by Russia, saying a lack of visits to detained soldiers and civilians meant they were vulnerable to being tortured.

Russian forces earlier on Tuesday claimed to have retaken territory from Ukrainian troops in the eastern Kharkiv region. It was Moscow's first announced capture of a village there since being nearly entirely pushed out of the region last month.

Tehran said it was ready for talks with Kyiv to clarify "baseless" claims that Iran is providing Russia with weapons and drones for its Ukraine war.

The Kremlin said Tuesday it had no knowledge of its army using Iranian drones in Ukraine.

The defence ministry did, however, confirm strikes on energy facilities over the past 24 hours, saying it had used long-range and precision weapons.

On Tuesday, Russian investigators said initial indications suggest the crash of a military plane into a residential building near Ukraine was due to a technical malfunction.