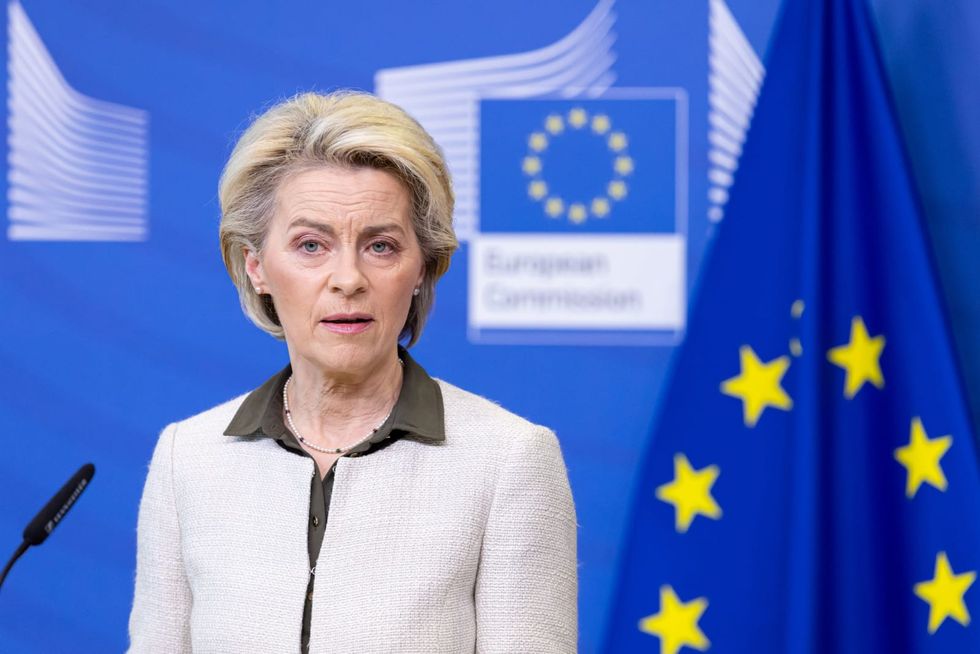 "They won't be able to land in, take off or overfly the territory of the EU. Including the private jets of oligarchs," von der Leyen said of the airspace measures that came four days after the start of Russia's military campaign against Ukraine.

Individual EU countries have been announcing bans on Russian planes in its airspace in recent days.

Britain has also banned Russian airlines from landing at its airports or crossing its airspace, meaning Moscow is facing a massive blockade of the continent's skies.

Passengers could still transfer to countries that have not imposed flight bans. Istanbul, for example, is a hub that connects Western Europe and Russia.

Later, the Russian airline Aeroflot said it would suspend all flights to European destinations from Monday, according to the Interfax news agency.

Von der Leyen meanwhile praised Ukrainian President Volodymyr Zelensky's leadership in the face of Russia's attack, saying "his bravery and the resilience of the Ukrainian people are an inspiration to us all."

The European Commission president also spoke in favour of Ukraine joining the European Union in an interview with Euronews.

"Indeed over time they belong to us. They are one of us and we want them in," von der Leyen said, also emphasizing that there are already several areas of cooperation between the bloc and the country.

"Had a phone conversation with [von der Leyen]. Talked about concrete decisions on strengthening Ukraine's defense capabilities, macro-financial assistance and Ukraine's membership in the #EU," Zelensky said in the early hours of Monday.

The Ukrainian leader said that he also spoke to British Prime Minister Boris Johnson and Polish President Andrzej Duda over the phone and "agreed on further joint steps to counter the aggressor."

The EU also went after the Russian state media outlets RT and Sputnik.

Von der Leyen referred to them as "the Kremlin's media machine" and said they were being used to spread Russian President Vladimir Putin's lies to justify his war against Ukraine.

Several of the 27 EU countries have already taken measures against Russian state media.

Latvia and Estonia blocked a number of Russian-language channels in response to Russia's invasion of Ukraine, while RT - formerly known as Russia Today - was taken off Austrian airways on Sunday. RT's German-language channel was also recently blocked by a Berlin regulator.

Johnson critized RT for "peddling" content that is "doing a lot of damage to the truth," but said it wasn't within his power to ban the channel.

"We have a principle in this country that we don't allow politicians to ban this or that media organisation," he said in comments reported by the Press Association. "And that's the way we do it. And I think we're better for that."

In announcing the EU measures, neither von der Leyen nor EU Foreign Policy Chief Josep Borrell gave details about the timing of the ban or how it would be imposed.

Borrell only said that there were technical ways to ban the broadcast of RT and Sputnik in the EU.

RT is repeatedly criticized in the West as a Kremlin propaganda tool.

The central accusation is that the channel spreads conspiracy theories and disinformation on behalf of the Russian state. RT rejects this premise. The channel has several foreign-language programmes in its portfolio.

Additionally, in a significant break with previous policy, von der Leyen said that for the first time the EU will finance the purchase and delivery of weapons and equipment to a country under attack.

The EU will provide half a billion euros (556 million dollars) for the delivery of weapons and equipment to the Ukrainian armed forces.

Borrell said the material is to be brought to Ukraine via a logistics base in Poland. Details are to be clarified on Monday at consultations of the defence ministers of the 27 member states.

Also on Sunday, the European Commission said it would soon propose new rules in response to a "mass influx" of Ukrainian refugees. The proposal is expected to be considered by EU interior ministers on Thursday.

The mechanism would allow displaced persons to be granted immediate temporary protection without a lengthy asylum procedure.

EU Home Affairs Commissioner Ylva Johansson said she does not know how many people will come but that the 27-member bloc should "prepare for millions."

Russia launched a long-feared invasion of Ukraine in the early hours of Thursday, prompting international outrage and sending hundreds of thousands of people fleeing into neighbouring countries, many of which are EU member states.

German Interior Minister Nancy Faeser advocated for fast, straightforward help for all people fleeing the war on the EU's doorstep.

"For us, the most important thing now is to find unbureaucratic solutions to get people to safety as quickly as possible," Faeser said ahead of the meeting with her colleagues.