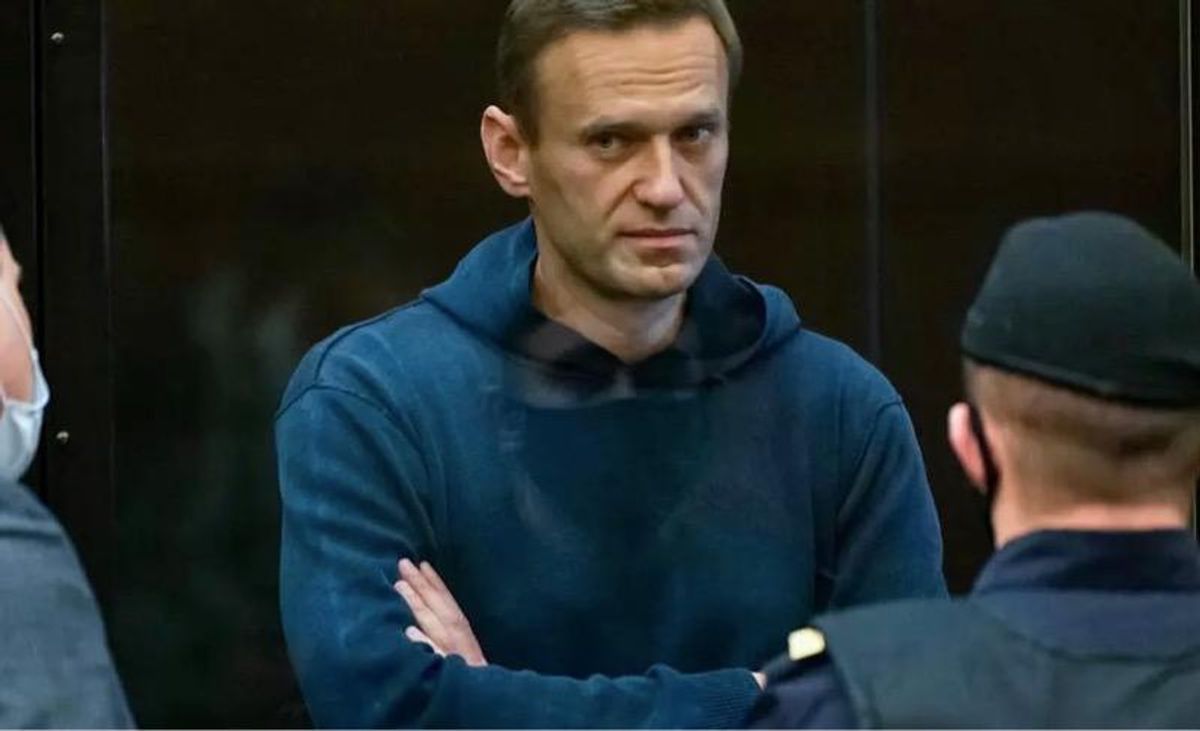 Russian opposition leader Alexei Navalny, charged with violating the terms of a 2014 suspended sentence for embezzlement, during a court hearing in Moscow on February 2, 2021. © AFP

Russia on Friday said it was expelling diplomats from Germany, Poland and Sweden for participating in unauthorized demonstrations in support of jailed Kremlin critic Alexei Navalny, a move the EU's top diplomat and several European leaders condemned as "unjustified" and "completely unfounded".

The Russian foreign ministry said in a statement that an unspecified number of diplomats from the three EU countries took part in "illegal demonstrations" on January 23 and had been declared persona non grata. Tens of thousands of people across Russia took to the streets that day to protest the arrest of Navalny, the Kremlin's most prominent critic.

"They were ordered to leave Russia in the near future," the ministry said, adding that Moscow expects diplomats from the countries to "strictly follow the norms of international law" in the future.

The EU's top diplomat Josep Borrell "strongly condemned" the expulsions when he was informed of it during a meeting in Moscow with Russian Foreign Minister Sergei Lavrov, a spokesman said.

"During the meeting with FM Lavrov, HRVP Borrell learned that three European diplomats are going to be expelled from Russia," EU spokesman Peter Stano said, referring to Borrell's position as High Representative of the European Union.

"The HRVP strongly condemned this decision and rejected the allegations that they conducted activities incompatible with their status as foreign diplomats. The decision should be reconsidered."

"We consider these expulsions to be unjustified. We believe it is yet another aspect that can be observed right now of Russia being quite far from the rule of law," she said.

The Swedish foreign ministry also called the decision to expel one of its diplomats "completely unfounded".

"The ministry considers this as completely unfounded, which we have also told our Russian counterpart", the Swedish foreign ministry said in written remarks to AFP, adding that it "reserves the right to an appropriate response".

Poland meanwhile summoned the Russian ambassador in Warsaw and the Polish foreign ministry issued a statement noting that, "The Polish side expects the Russian authorities to reverse this erroneous decision...Otherwise, Poland leaves itself the option to take appropriate steps."

French President Emmanuel Macron joined the chorus of condemnations, saying he "very strongly" condemned Moscow's behaviour towards Navalny from his poisoning to his arrest and to the expulsion of foreign diplomats.

"I stand in solidarity with the three countries that have had their diplomats expelled," Macron told a news conference following a virtual meeting of the France-German Defence and Security Council.

The expulsion announcement came as Borrell, during a meeting with his Russian counterpart Lavrov, appealed for Navalny's release and for the launch of an investigation over his poisoning," Borrell told a news conference alongside Lavrov, referring to Navalny's poisoning in Russia in August.

"Our relationship is indeed in a difficult moment," Borrell said, adding that "certainly our relations are under severe strain and the Navalny case is a low point".

Speaking in turn, Lavrov said the EU and Russia were at odds over many issues, warning of "unpredictable consequences" should relations deteriorate further.

Regarding the threat of EU sanctions in the Navalny case, Lavrov added that "Russia considers the European Union to be an unreliable partner."

The EU's ties with Russia have been in the doldrums since Moscow seized Crimea and began fueling the war in Ukraine in 2014 – and there are concerns about its involvement in Belarus, Syria, Libya, central Africa and the Caucasus.

Borrell was eager to sound out his veteran counterpart on the chances of cooperation on issues including enlisting Russia's help in reviving the Iran nuclear deal and tackling climate change. But the jailing of Navalny and detention of thousands of demonstrators across Russia by baton-wielding security dominated his visit.

In Europe, calls are growing from some nations for the EU to bulk up on sanctions it slapped on six Russian officials in October over the nerve agent poisoning that left Navalny fighting for his life in Germany.

EU foreign ministers last week agreed they would revisit the issue if he was not released.

"After this ruling, there will now also be talks among EU partners. Further sanctions cannot be ruled out," said German Chancellor Angela Merkel's spokesman Steffen Seibert.

An EU statement said foreign ministers would discuss "possible further action" at a meeting on February 22.

Navalny himself called at the European Parliament last year – two months before his fateful return to Moscow – for sanctions to hit the oligarchs and money-men he accuses of protecting Putin's wealth.

But European diplomats say that any measures, if they come, would likely just target officials and functionaries directly involved in the clampdown.

There have also been calls for Germany to halt the highly contentious Nord Stream 2 pipeline project to bring Russian gas to Europe.

Continental powerhouse Berlin has rebuffed the clamor and Borrell insists Brussels has no power to make Germany pull the plug.

"I don't think that it is the way to resolve the problem with Navalny," Borrell said ahead of his trip.

"The Russians won't change course because we tell them we will stop Nord Stream."

For Moscow the visit looks set to be used as a chance both to deflect from its own issues and show that the West still wants to talk to it regardless.

"On the one hand, the Kremlin is eager to portray the EU as a weak actor with a lot of internal problems," said Susan Stewart from the German Institute for International and Security Affairs.

"On the other hand, despite official rhetoric, the Kremlin is still keen to demonstrate that western actors are interested in cooperating with Russia, since this increases its status and legitimacy," she told AFP

Dr. Jason Johnson, professor at Morgan State University, dropped a truth-bomb on Democrats during his appearance with MSNBC host Nicolle Wallace on Tuesday. According to him, there is no other bill than voting rights, because, without it, the GOP voter suppression laws will ensure Democrats lose.

While the panel debated the importance of the voting rights bill and whether Democrats will fight for it, Johnson explained that it's the only issue that Democrats should focus on.

The National Rifle Association filed for bankruptcy in an attempt to reincorporate in the more gun-friendly state of Texas in an effort to avoid the Attorney General of New York's oversight and investigation but on Tuesday a federal judge handed the gun lobbying group a major defeat.

U.S. Bankruptcy Judge Harlin Hale ruled the NRA may not move to Texas and will remain incorporated in the state of New York, Reuters reports, and will remain subject to NY Attorney General Letitia James' review. James is suing the NRA and seeking a court dismantle the gun group over its alleged corruption.

Hutchinson told CNN's John Berman that the Republican effort to oust Wyoming GOP Rep. Liz Cheney her position as the Republican Party's conference chair over her criticisms of the former president.