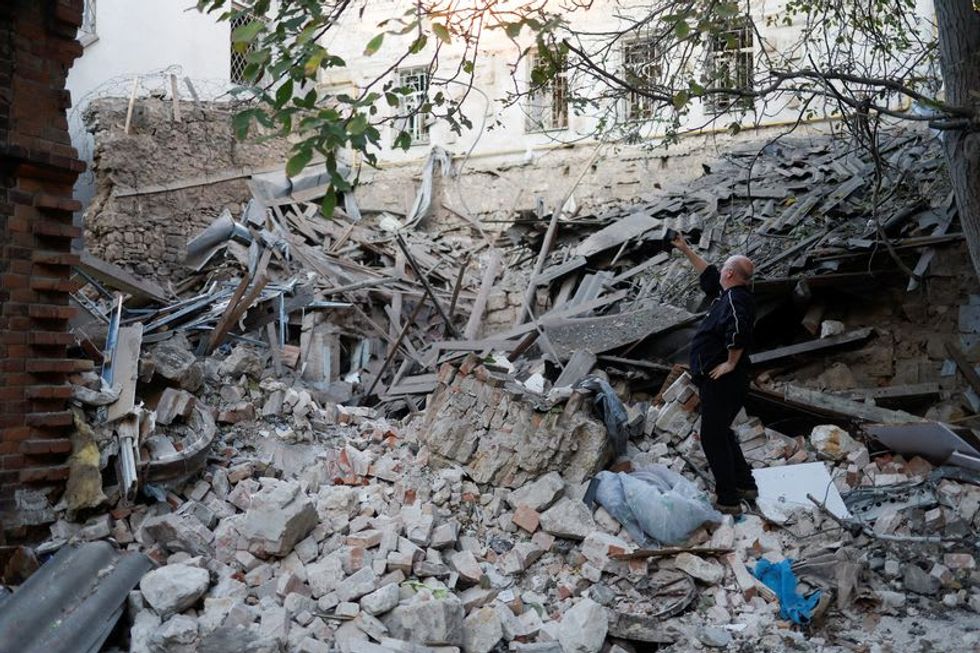 By Jonathan Landay and Jeff Mason

MYKOLAIV, Ukraine/WASHINGTON (Reuters) -A Russian missile struck an apartment building in the Ukrainian port of Mykolaiv early on Tuesday, a Reuters witness said, the latest strike on a city hours after the United States warned that it would hold Russia accountable for war crimes.

The missile, which caused one of three explosions heard in the southern city in the early hours of Tuesday, completely destroyed one wing of the building in the downtown area, leaving a massive crater.

A fire crew pulled the dead body of a man from the rubble, the witness said.

Monday brought Russian strikes on the capital Kyiv and other cities in which at least four people were killed, the second wave of air strikes in a week.

The Russian strikes followed advances by Ukrainian forces in the east and south and after an Oct. 8 blast on a bridge linking mainland Russia to Crimea - the peninsula Russia annexed from Ukraine in 2014.

"Right now, there is a new Russian drone attack," Zelenskiy, said in a Monday evening video address. "There are (drones) that have been shot down."

The Interfax Ukraine news agency said Telegram users had reported blasts in the town of Fastiv just outside Kyiv, as well as in the southern port of Odesa.

Russian President Valdimir Putin sent tens of thousands of troops into Ukraine on Feb. 24 in what he called a "special operation" to root out what it calls dangerous nationalists.

Ukrainian forces have mounted stiff resistance, with the help of arms supplied by the United States and its allies, who have also imposed sweeping sanctions on Russia in an effort to force it to withdraw.

Mentioning a $725 million military aid package announced for Ukraine last Friday, Jean-Pierre said the United States would stand with the people of Ukraine "for as long as it takes".

"We will continue to impose costs on Russia, hold them accountable for its war crimes," she said.

A pregnant woman was among four people killed in an attack on a Kyiv residential building, mayor Vitali Klitschko said. Ukraine's Interior Minister Denys Monastyrskyi said there had been deaths in other cities but did not provide a full toll.

Black smoke poured out of the windows of the Kyiv apartment building and emergency service workers toiled to douse flames.

"I have never been so afraid ... It is murder, it is simply murder," said Vitalii Dushevskiy, 29, a food delivery courier who rents an apartment in the building.

Russia denies targeting civilians. Its defence ministry said it had carried out a "massive" attack on military targets and energy infrastructure across Ukraine using high-precision weapons.

Ukraine said the attacks were carried out by Iran-made "suicide drones", which fly to their target and detonate. The United States, Britain and France agreed that Iran supplying drones to Russia would violate a U.N. Security Council resolution that endorsed the 2015 nuclear deal between Iran and six powers.

Iran on Monday stuck to its denial that it is supplying the drones to Russia, while the Kremlin has not commented.

The White House accused Iran of lying when it says Iranian drones were not being used by Russia in Ukraine.

Asked for comment, the Iranian mission to the United Nations repeated a statement issued by the government on Friday that said it supports upholding the U.N. Charter and the U.N. attempts to find a peaceful solution to the conflict in Ukraine.

Several EU foreign ministers on Monday called for sanctions against Iran over the transfer of drones to Russia.

Ukraine's military said it had destroyed 37 Russian drones since Sunday evening, or around 85% of those used in attacks. Reuters was not able to independently verify that tally.

In Russia itself, a Russian fighter plane crashed into a residential building in the southern city of Yeysk, engulfing apartments in flames and killing up to 13 people, the Interfax news agency reported.

The Su34 fighter-bomber crashed during a training flight after one of its engines burst into flames, Tass reported, adding that the pilots ejected.

Russia's state Investigative Committee said it had opened a criminal case. Yeysk is separated from occupied Russian territory in southern Ukraine by a narrow stretch of the Sea of Azov.

Russia and Ukraine on Monday, meanwhile, carried out one of the biggest prisoner swaps of the war, exchanging a total of 218 detainees, including 108 Ukrainian women, officials from both sides said.