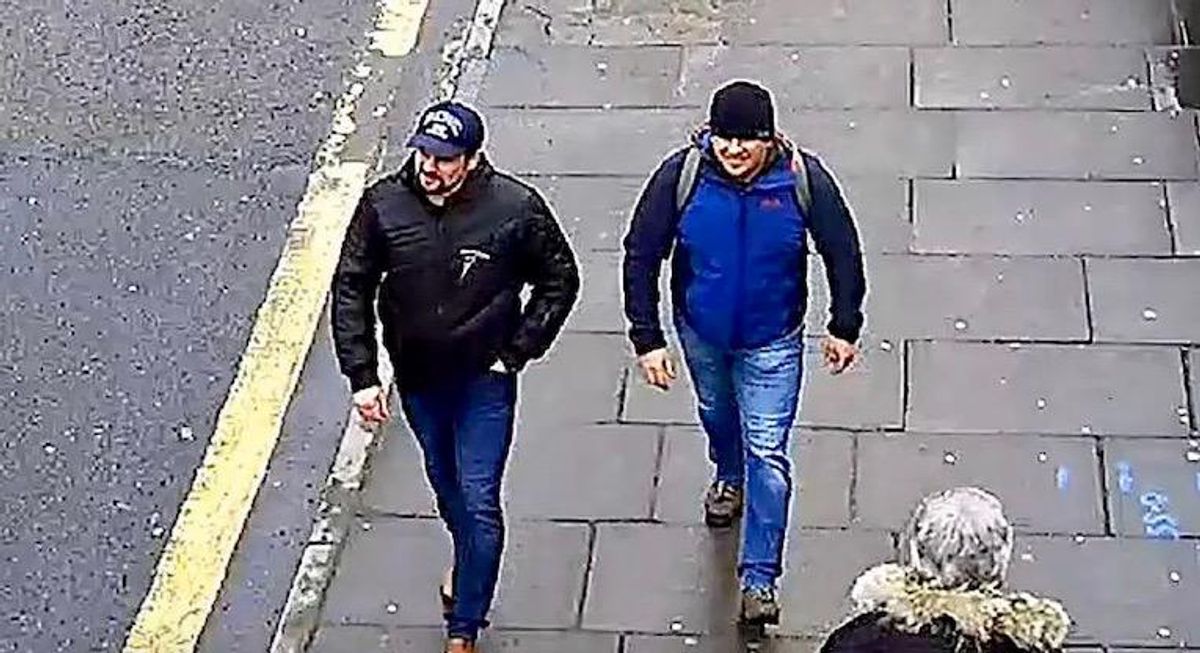 Britain said they had travelled to Salisbury to assassinate Skripal, smearing his door handle with Novichok, a Soviet-era nerve agent.

Now "Petrov" and "Boshirov" have been linked with another attack on European soil.

Over the weekend, police in the Czech Republic said they suspected them of being involved in the 2014 blast of an ammunition depot in the eastern village of Vrbetice that killed two people.

Analysts say their modus operandi reveals much about Moscow's secret activities: expeditious, reckless and without fear of consequences.

While Skripal survived the 2018 attempted assassination, a local woman was killed by Novichok after she picked up a discarded perfume bottle.

Petrov and Boshirov -- or Anatoly Chepiga and Alexander Mishkin, according to Bellingcat -- did little to hide their presence in Britain.

Their faces and movements were photographed and filmed from London's Gatwick Airport to Salisbury and back to London, where they flew back to Moscow from Heathrow.

In a revelation the British press made much of at the time, Bellingcat found that one of the two men's personal vehicles was registered to the GRU. The passports with their aliases had been issued almost at the same time, it added.

Appearing nervous in the public eye, they claimed to be sports supplement salesmen who had gone to Salisbury for a sightseeing trip.

On Saturday, their faces were all over the news once again, when the Czech government accused them of being involved in a sabotage operation -- a 2014 blast previously considered an accident.

Crucial in identifying the agents, according to the BBC, was an email from Tajikistan's National Guard asking for two men to be given access to the ammunitions depot, with copies of their passports attached.

The faces on the passports -- for a Ruslan Tabarov from Tajikistan and a Nicolaj Popa from Moldova -- matched those of Petrov and Boshirov filmed in Britain.

Many people on Russian social media have revelled in mocking the agents for having been exposed twice.

"Petrov and Boshirov -- that would be a great series! Better than James Bond," joked one Twitter user.

But military analyst Alexander Golts pointed out that in the Czech affair the two men had "fulfilled their mission", only being identified six years later.

"Sooner or later an agent, especially if he is a saboteur, will be unmasked," Golts told AFP.

Petrov and Boshirov, however, are not the only alleged Russian agents to have hit the public eye in recent years.

In 2018, the Netherlands expelled four Russians it said were GRU agents, accusing them of attempting to hack the Organisation for the Prohibition of Chemical Weapons (OPCW).

The police found a number of clues, above all a taxi bill for a trip from a Russian military intelligence site in Moscow to the airport.

Building on the details revealed by the Netherlands, Bellingcat unmasked 305 suspected GRU agents. Every single one of them had their vehicles registered at the agency's official address.

Then in December 2020, Bellingcat and Russian opposition figure Alexei Navalny announced they had found the perpetrators of a poisoning attack on him with Novichok -- the same poison used against Skripal.

That same month, Navalny said he had tricked a security agent into admitting the Federal Security Service (FSB) domestic intelligence agency had tried to kill him with the poisoning attack -- by impersonating his superior.

Analysts says those errors -- that verge on amateurism -- contrast with the accounts of the famed exploits of Soviet agents.

But Russian intelligence agencies and their recruits have undergone a transformation in the years since the USSR's collapse in 1991.

"It is their recruitment policy: to find fully dedicated agents who want above all to carry out orders" to the detriment of professionalism, Andrei Soldatov, a specialist on the intelligence services, told AFP before the Czech affair.

"You get obedient but unskilled spies."