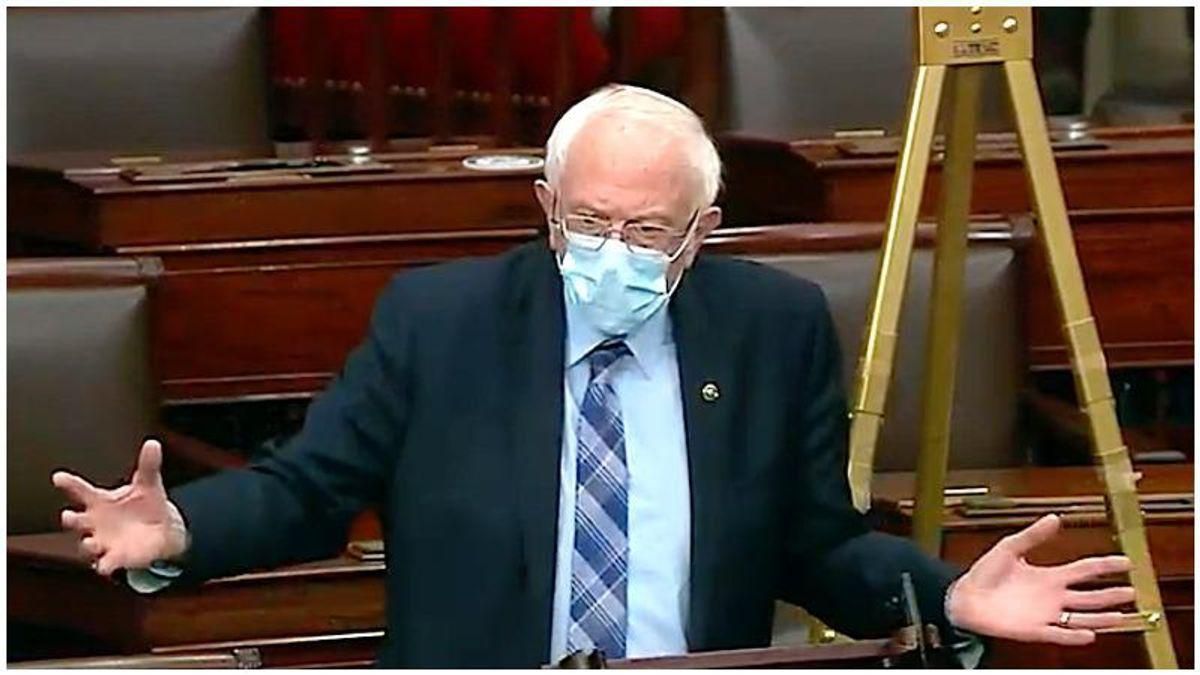 Sen. Bernie Sanders, chairman of the Senate Budget Committee, said Saturday that amid the immediate emergencies of climate change, Covid-19, mass unemployment, and homelessness, congressional Democrats cannot afford to dampen their infrastructure ambitions in the hopes of winning support from obstructionist Republicans.

"The time is now to go forward," Sanders (I-Vt.) told the Washington Post. "This country faces enormous crises that have got to be addressed right now. When you have half a million people who are homeless, I'm not going to slow down."

"This country faces enormous crises that have got to be addressed right now. When you have half a million people who are homeless, I'm not going to slow down."
—Sen. Bernie Sanders

"When the scientists tell us we have five or six years before there will be irreparable damage done because of climate change," the Vermont senator added, "I'm not going to slow down."

Sanders' remarks came as the Democratic leadership is weighing how to proceed with the roughly $2.3 trillion infrastructure package President Joe Biden unveiled last month, a proposal that will serve as a starting point for congressional negotiations. House Speaker Nancy Pelosi (D-Calif.) has said she hopes to pass infrastructure legislation by July.

But unified Republican opposition to the package and growing complaints from conservative deficit scolds within the Democratic caucus are threatening to impede work on the package that progressives hope to transform into a sprawling bill that deals with a wide range of priorities, from climate to affordable housing to prescription drug prices.

On Monday, the Senate parliamentarian gave Democrats a green light to use the filibuster-proof budget reconciliation process for additional spending legislation this year, granting the party the option to move ahead with an infrastructure measure without Republican support.

Sanders told the Post that he is preparing to use the reconciliation tool, but Senate Majority Leader Chuck Schumer (D-N.Y.) has not publicly committed to that strategy as the Biden administration continues to hold out hope for a bipartisan compromise. With the legislative filibuster in place, Senate Democrats would need the support of at least 10 Republicans to pass an infrastructure bill through regular order.

But progressive lawmakers have cautioned the Biden administration against weakening an infrastructure package they believe is already insufficient in a likely futile effort to win over Republican lawmakers, who unanimously voted against a broadly popular $1.9 trillion coronavirus relief package last month.

"Let's not water down a bill for a party that's not actually interested in bipartisanship or wait for Republicans to have some awakening on climate change," Rep. Pramila Jayapal (D-Wash.), chair of the Congressional Progressive Caucus, said earlier this month. "Let's move with the urgency and boldness that this moment calls for."

In a report released Thursday, Adam Hersh of the University of Massachusetts Amherst and Mark Paul of the New College of Florida argued that under-spending in response to the current crises risks long-term damage to the economy and the climate—a warning progressives cited as all the more reason to quickly push ahead with an ambitious recovery package.

In an appearance on MSNBC Saturday, Sanders said that Republican lawmakers are "probably not" going to accept arguments in support of big spending on climate solutions, core infrastructure, caregiving, and more.

"They live in their world, and their world will be trying to obstruct as much as possible what Biden and many of us in the Congress are trying to do," Sanders said, arguing that the GOP's top priority is "trying to divide us up by stressing xenophobia, racism, [and] making it harder for people to vote."