Right-wing newspaper keeps the flickering light on for Sarah Palin 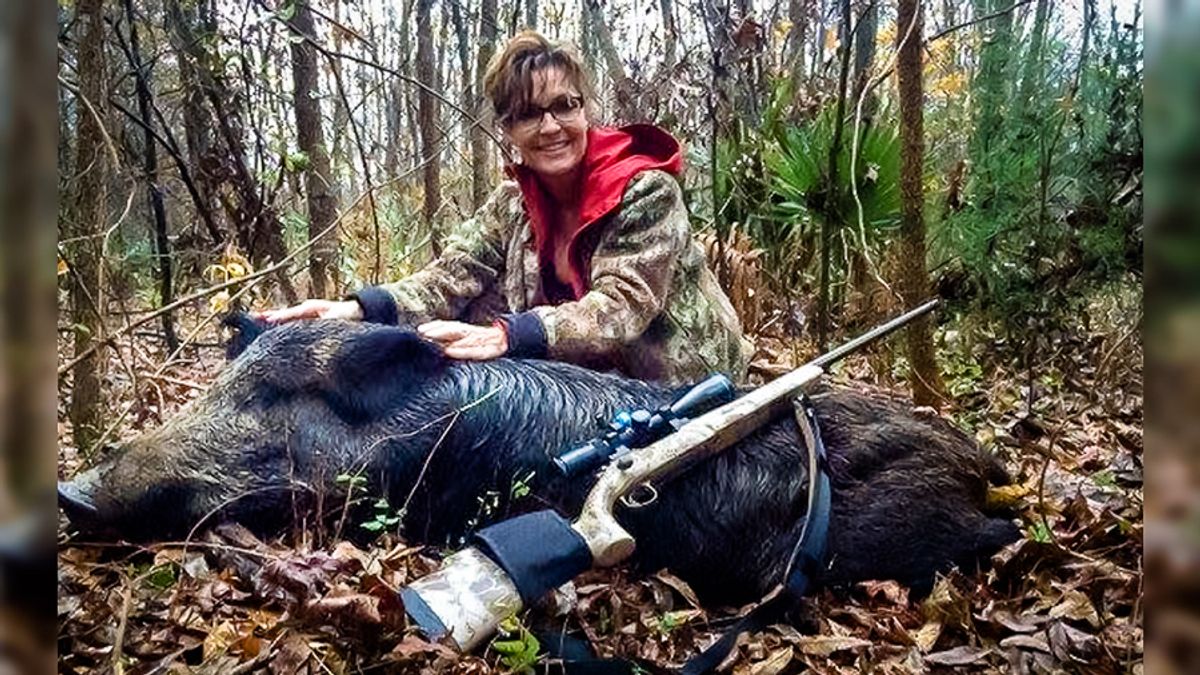 It's probably just a fever dream, but those who like their politics stupidly entertaining should be grateful this week to the far-right Washington Times. The erstwhile Moonie Paper uttered the magic words in its desire to cancel Alaska Senator Lisa Murkowski for her vote to impeach Donald Trump:

"It's put a mama bear-size bullseye on the three-term senator."

The reference to Sarah Palin -- the former Alaska governor, vice-presidential lead weight and walking SNL joke -- brought hopeful tears to the eyes of ratings-starved media executives across the political spectrum. In the deep, dark woods of GOP extremism, there's only one Mama Bear.

It might be a mirage. Even though the newspaper observed that Alaska Republicans were angry with Murkowski's vote -- that's hardly breaking news -- it didn't quote anyone who specifically was crying out for Palin.

There was this: "Ms. Palin, who served as Alaska's ninth governor and the Republican Party's 2008 vice presidential nominee on the ticket with John McCain, is an early favorite among conservatives. But she isn't the only possible contender for the race. Alaska Gov. Michael James Dunleavy, who has been in office since 2018, is being prodded by some in the party."

Still, the headline for the story only mentioned one person, and it wasn't the sitting governor. No, it read "Sarah Palin eyed to challenge… Murkowski."

Palin retains a media star power that few if any this side of the former president of Trump University can lay claim to. The closest vacuous weirdo in contemporary politics -- gun-toting QAnon congresswoman Lauren Boebert -- surely counts the nickname "Palin 2.0" as one of her highest honors.

And you betcha Palin is dying to be somebody again. After a few years of relative obscurity, Palin popped up less than a year ago, in the words of The Guardian, "stunning TV viewers… with an appearance on TV show The Masked Singer in which she rapped Baby Got Back while dressed as a furry bear.

"The popular show involves mystery guests in elaborate costumes singing songs. Their identities are then revealed. Dressed as a bear, Palin had sung the hit song by Sir Mix-a-Lot, dancing around the stage and belting out the lyrics with gusto to a cheering crowd.

"The revelation of the one-time conservative powerhouse as being the singer inside the purple and pink bear costume appeared to stun host Nick Cannon. 'This might be the most shocked I've ever been on this show,' he said."

And last October, Palin cried out again for attention with a bizarre Instagram post -- featuring Palin in front of her house artfully delivering a late-kindergarten-genre script-- in which she warns Murkowski, "I can see 2022 from my house." Sadly, not many people noticed.

Palin got a bit more coverage December 11 as she traveled to Georgia to support the failed campaigns of ex-Senators Kelly Loeffler and David Perdue." In perhaps a sign of respect for her star appeal, Palin followed QAnon congresswoman, Marjorie Taylor-Greene on the program. At least Palin wasn't the warm-up act on this day.

"We need you to crush it and to send that message, the loudest message that we can, that no, we will not implement at all socialism in America," Palin told the crowd with her trademark eloquence. She also showed that she was all in for Trump's Big Lie about the election, a position she fervently maintains to this day.

Ominously, Palin remains a loser, and the stars don't seem aligned for her to change that if she takes on Murkowski. There would be plenty of drama -- Palin's first statewide win was her Republican Primary thrashing of Murkowski's father, Frank Murkowski, in 2006.The elder Murkowski had been one of Alaska's U.S. Senators. After he was elected governor in 2002, he controversially appointed his daughter to fill his empty seat.

In 2022, Murkowski won't have to worry about getting taken out in a Republican Primary by Palin, Dunleavy or other right-wing conservatives. Alaska voters last November enacted a voting system that eliminated traditional party priorities and replaced it with a non-partisan jungle primary that will whittle the field to four candidates for the general election. Then the winner is decided by ranked choice voting, a system gaining national traction among election-reform advocates.

So it would be uphill battle for Palin, whose meteor began falling to earth in 2011 after she had decided not to run for president despite having caught the fancy of a filmmaker adviser named Steve Bannon. He financed and produced a film called "The Undefeated" that, as Politico reported, "chronicles Palin's rise to prominence as a populist figure taking on crony capitalism within the Alaskan Republican Party, her fall from grace at the hands of seemingly unfair attacks by her own party's establishment and liberal elites, and her constant efforts to fight for the working class."

With Bannon's help, Trump would move in to fill that space. But to the media, the joy of Palin returning to the spotlight in 2022 would have nothing to do with politics or ideology. Instead, it would be driven by a thirst for moments like her legendary 2008 CBS interview with Katie Couric after she was named McCain's vice president pick. For the nostalgic, here's a trip down memory lane.

COURIC: And when it comes to establishing your world view, I was curious, what newspapers and magazines did you regularly read before you were tapped for this—to stay informed and to understand the world?

PALIN: I've read most of them again with a great appreciation for the press, for the media, coming f—

COURIC: But like which ones specifically? I'm curious that you—

That was pure political comedy gold. And the media hasn't forgotten about it.