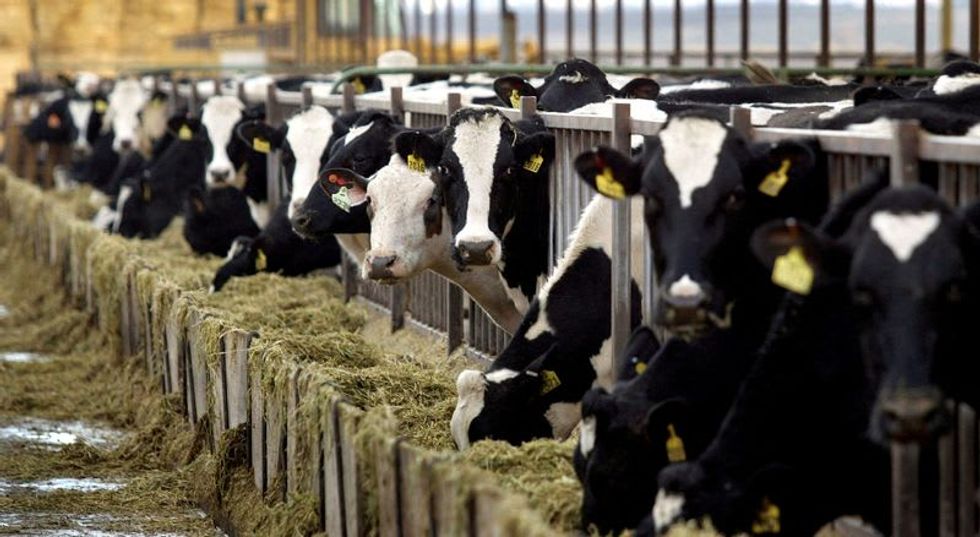 WASHINGTON (Reuters) - Satellites have detected methane emissions from belching cows at a California feedlot, marking the first time emissions from livestock - a major component of agricultural methane - could be measured from space.

Environmental data firm GHGSat this month analyzed data from its satellites and pinpointed the methane source from a feedlot in the agricultural Joaquin Valley near Bakersfield, California in February.

This is significant, according to GHGSat, because agricultural methane emissions are hard to measure and accurate measurement is needed to set enforceable reduction targets for the beef-production industry.

GHGSat said the amount of methane it detected from that single feedlot would result in 5,116 tonnes of methane emissions if sustained for a year. If that methane were captured, it could power over 15,000 homes, it said.

Agriculture contributes 9.6% to U.S. greenhouse gas emissions, according to Environmental Protection Agency (EPA), and about 36% of methane emissions, mostly from livestock.

The Biden administration late last year announced its plan to crack down on methane emissions from the U.S. economy.

The EPA unveiled its first rules aimed at reducing methane from existing oil and gas sources that require companies to detect and repair methane leaks. The Agriculture Department rolled out a voluntary incentive program for farmers.

At last year's climate talks, more than 100 countries pledged to cut methane emissions by 30% and to halt and reverse deforestation by 2030. Much of this reduction would need to come from the livestock industry, according to the U.N. food agency, which said that livestock accounts for 44% of man-made methane emissions.

Several methods to reduce livestock methane emissions are being tested, including adding seaweed to cattle diets.

Progressives on Wednesday warned that time is running out for Democratic leaders to take Republicans at their word regarding slashes to social safety net programs, as U.S. Sen. John Thune indicated the GOP will use a potential fight over the debt ceiling next year as leverage to push cuts—unless the Democrats act now to raise the debt limit while they still control the Senate and House.

Thune (R-S.D.), who is the number-two Republican in the Senate as the chamber's minority whip, told Bloomberg Tuesday that the party has a "long list" of policy priorities for the next Congress, which will commence on January 3. The party plans to put forward budget reforms including to federal programs which they have long claimed, erroneously, are unsustainable.