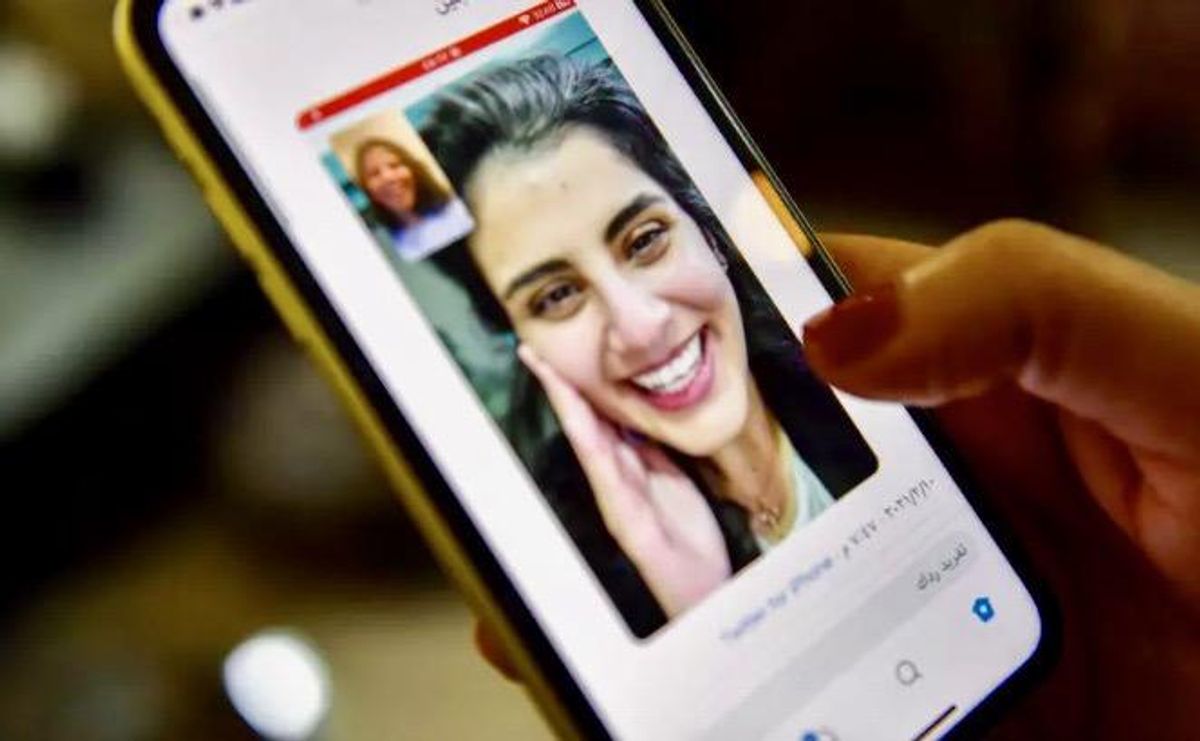 A tweet posted by the sister of Saudi activist Loujain al-Hathloul, Lina, shows a screenshot of the two of them conducting a video call following Hathloul's release after nearly three years in detention Fayez Nureldine AFP

Hathloul, 31, was provisionally released in Saudi Arabia on Wednesday after being detained in May 2018 with about a dozen other women activists just weeks before the kingdom's historic lifting of a decades-long ban on female drivers -- a reform they had long campaigned for.

"I would say thank you Mr President that you helped my sister to be released," Alia al-Hathloul told a virtual press conference.

"It's a fact that Loujain was imprisoned during the previous administration, and she was released a few days after Biden's arrival to power.

"Biden's arrival helped and contributed a lot in my sister's release."

Saudi Arabia, which has detained hundreds of activists, clerics as well as royal family members, abruptly accelerated some political trials -- including that of Hathloul -- after Biden's election win late last year.

On Wednesday, Biden welcomed the decision to release her, saying it was "the right thing to do".

The US State Department said the activist should never have been jailed.

The release of Hathloul, who is still under probation and is barred from leaving Saudi Arabia, came after her siblings launched a vigorous campaign overseas for her freedom in a major embarrassment for the kingdom.

The siblings posted pictures on Twitter of the smiling activist, who appeared physically weaker and had streaks of grey hair.

When asked what was the first thing her sister did upon her release, Alia said she "bought an ice-cream", a joy denied to her in detention.

In their first post-release video call with the activist on Wednesday, her other sister Lina al-Hathloul said they could not "trust her smile".

"We asked her 'when you were in prison, you said you were fine,'" said Lina.

"She said 'what did you want me to do?... An electric (stun gun was) on my ear... They (prison authorities) were ready to electrocute me'."

Hathloul's family has alleged she experienced torture and sexual harassment in detention, claims repeatedly dismissed by a Saudi court.

In late December, a court handed Hathloul a prison term of five years and eight months for terrorism-related crimes, but her family said a partially suspended sentence -- and time already served -- paved the way for her early release.

The women's rights activist was convicted of inciting regime change and seeking to disrupt public order, in what her family deplored as a "sham" and "politically motivated" trial.

Saudi authorities have not officially commented on her detention, trial or release.

Her family said the activist is on probation for three years and faces a five-year travel ban, prompting her to refrain from media interviews and limit her presence on social media.

While some women activists detained along with Hathloul have been provisionally released, several others remain imprisoned on what campaigners describe as opaque charges.

The detentions have cast a spotlight on the human rights record of the kingdom, an absolute monarchy which has also faced intense criticism over the 2018 murder of journalist Jamal Khashoggi in its Istanbul consulate.