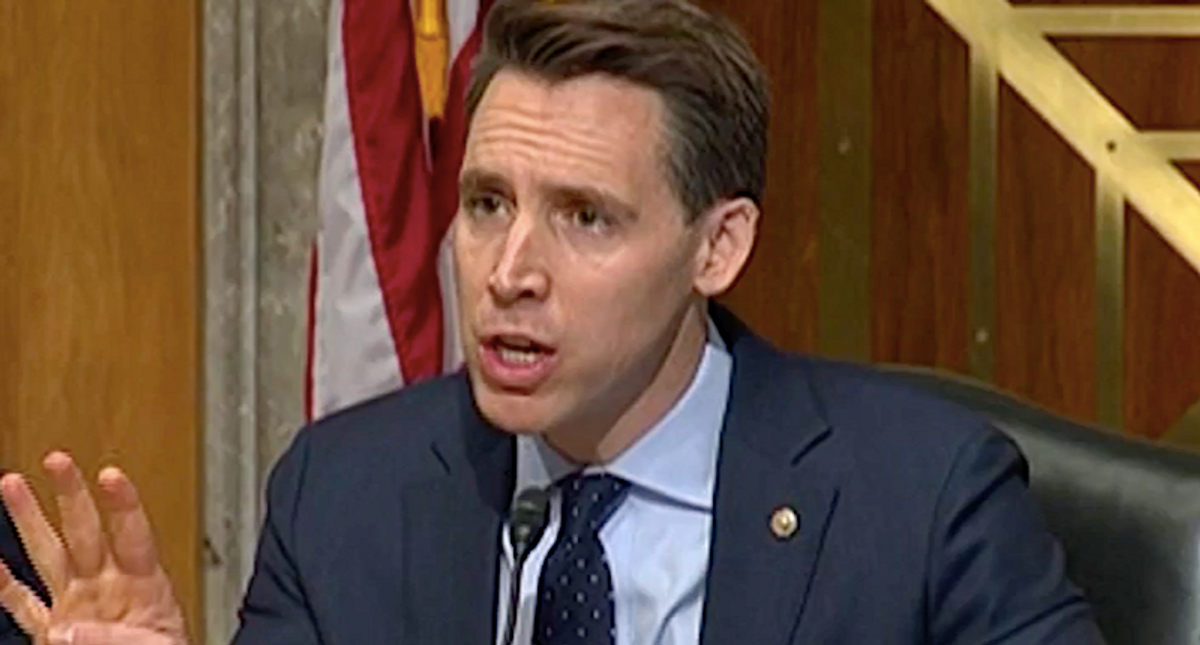 During a Thursday-night appearance on Fox News this week, Republican Sen. Josh Hawley of Missouri railed against the "woke corporations" that have been speaking out against Georgia's new voter suppression law. Georgia-based companies like Delta Airlines and Coca-Cola have been among the law's outspoken opponents, and Major League Baseball has decided to move its 2021 All-Star Game from Georgia to Colorado because of the law — all of which infuriates Hawley. Liberal Washington Post opinion writer Greg Sargent is vehemently critical of Hawley's comments in his Friday column, stressing that although the far-right Republican senator promotes himself as a populist, there is nothing populist about voter suppression.

On Fox News, the far-right Hawley complained, "What's happening in Georgia is what they tried to do to those of us who stood up for election integrity back in January. Anyone who has said that our elections need to be free, they need to be fair, we need to consider election reform — they try to cancel you. And now, the woke corporations are trying to do the same thing to Georgia. And they're going to try to do it to anybody, any state, any person who stands up for election integrity."

Hawley was trying to paint himself as a victim. But as Sargent points out, the far-right Missouri senator was being very anti-democracy when he refused to honor the results of the 2020 presidential election — and he is being just as anti-democracy now by supporting voter suppression in Georgia.

"Hawley is referencing his lead role in the campaign to subvert President Biden's electors in Congress," Sargent explains. "Hawley has insisted he was merely 'representing' constituents concerned about the 2020 election. In fact, he actually misled them with extraordinary cynicism, by sustaining the deception that the outcome was questionable and might be reversed."

Sargent continues, "After those lies inspired the violent assault on the Capitol, Hawley took scalding criticism, which he has now tossed into the right-wing media victimization machine — magically converting it into an effort to 'cancel' him. But this really shows how repugnant this current crusade really is."

The columnist goes on to slam Hawley and other Republicans for speaking of "election integrity" when their real goal is suppressing Democratic voters.

"Republicans are justifying their voter suppression efforts everywhere with this Orwellian 'election integrity' phrase," Sargent observes. "But far from seeking 'free' and 'fair' elections, as Hawley says, they're designed to place hurdles in the way of voting, based on the ubiquitous claim that GOP voters need 'confidence' restored — which is disingenuous nonsense."