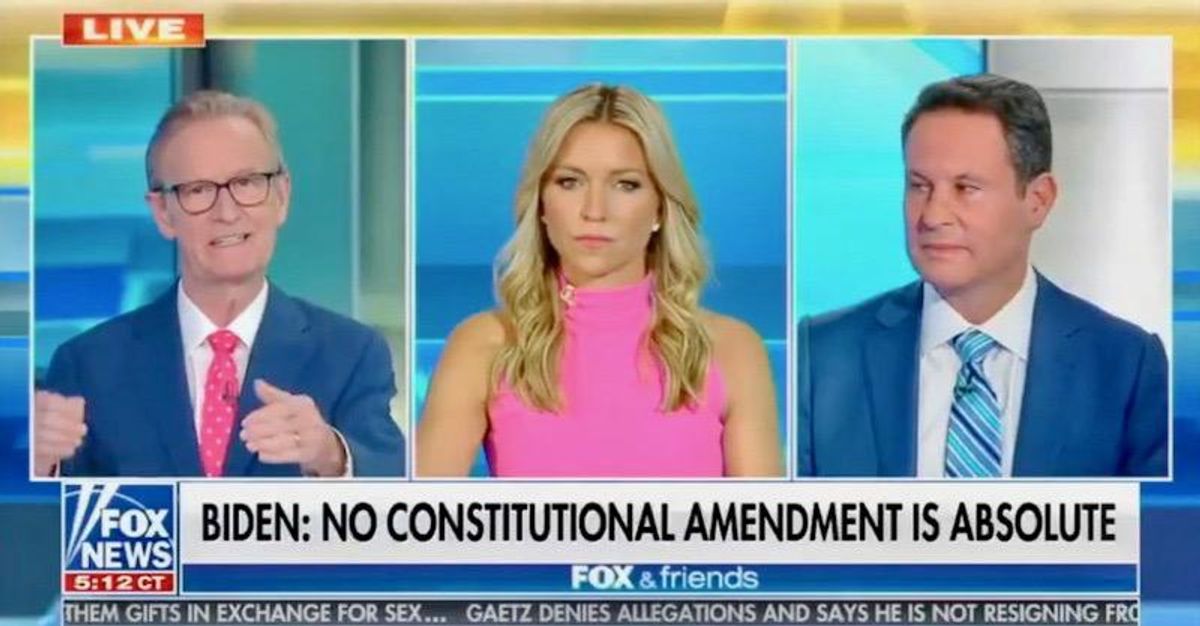 "Fox & Friends" has decided it is "shocking" that the President of the United States declared that no amendment to the Constitution is "absolute," despite Supreme Court rulings and even common examples which fill everyday American speech.

President Joe Biden on Thursday declared gun violence an "epidemic" and announced a series of actions, including six executive orders, to combat what he called a “blemish on our character as a nation."

"The part that is really shocking," co-host Steve Doocy claimed Friday, "is where the President just said no Amendment to the Constitution is absolute. He's talking about the Second Amendment, which he does not regard as, you know, giving everybody the right to do whatever they want to with guns, we know that we know his talking point."

Doocy went on to say that Biden "would like to do something about the Second Amendment, which he simply disagrees with," Doocy claimed. Biden has a 3500 word plan to end gun violence on his campaign website, and none of it has anything to do with abandoning the Second Amendment.

For 17 years, until 2008, Biden was an adjunct professor, teaching a constitutional law seminar at Widener University School of Law.

And Biden addressed all these points during his Rose Garden speech Thursday, a fact the Fox News team was counting on its viewers to not have watched.

"No amendment — no amendment to the Constitution is absolute," Biden said Thursday. "You can't yell 'fire' in a crowded movie theater and call it freedom of speech. From the very beginning, you couldn't own any weapon you wanted to own. From the very beginning that the Second Amendment existed, certain people weren't allowed to have weapons. So the idea is just bizarre to suggest that some of the things we're recommending are contrary to the Constitution."

The Supreme Court repeatedly has determined that "no right under the Constitution is absolute," UCLA law professor Adam Winkler told The Washington Post in 2015. "In general, where the government has very strong reasons to restrict a right, it can."

Doocy then declared that "it looks as if he's, he's been, you know, kind of a cafeteria approach to the Constitution," in a dog-whistle to Biden's Catholic faith, which conservatives often attack.