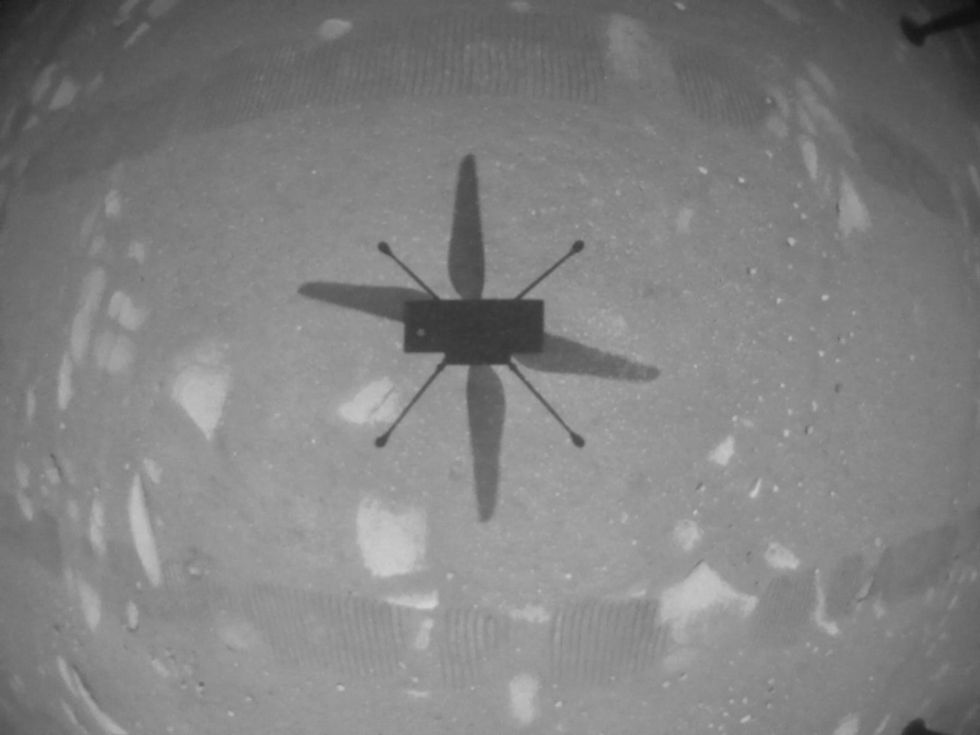 Ingenuity becomes first craft to fly on another planet - An undated handout photo issued by NASA of the Ingenuity Mars helicopter, which has completed the first powered, controlled flight on another planet. - -/NASA via PA Media/dpa

NASA's Ingenuity helicopter has completed a flight on Mars, becoming the first manmade craft to take to the sky on another planet, the US space agency said on Monday.

"Ingenuity has performed its first flight - the first flight of a powered aircraft on another planet!" NASA wrote on Twitter.

The tiny helicopter, which weighs 1.8 kilograms and is powered by four lithium batteries, flew about 3 metres into the air, briefly hovered in place and then returned to the surface of Mars.

A video posted on Twitter showed the NASA team applauding and cheering as footage from the flight arrived, recorded by the Perseverance rover.

The Mars footage showed the helicopter flying in the air and the shadow of Ingenuity from above.

The maiden flight had been delayed several times due to technical issues. Ingenuity is to be tested several more times in the coming weeks.

There are extreme conditions on Mars, with up to minus 90 degrees Celsius at night, which can be an issue for batteries.

Due to the planet's thin atmosphere, Ingenuity's rotors had to accelerate to 2,537 rotations per minute - much more than what is needed for helicopters on Earth.

Ingenuity travelled to Mars aboard the Perseverance rover, which weighs around 1,000 kilograms and is the size of a small car.

The rover arrived on the Red Planet in February, after travelling 472 kilometres over 203 days of flight. It landed in a dried lake spanning 45 kilometres called the Jezero Crater, which it is to inspect in the coming two years.

The construction and development of the rover took eight years and cost around 2.5 billion dollars.

Perseverance is meant to search for traces of microbial life on Mars and examine the climate and geology of the planet.