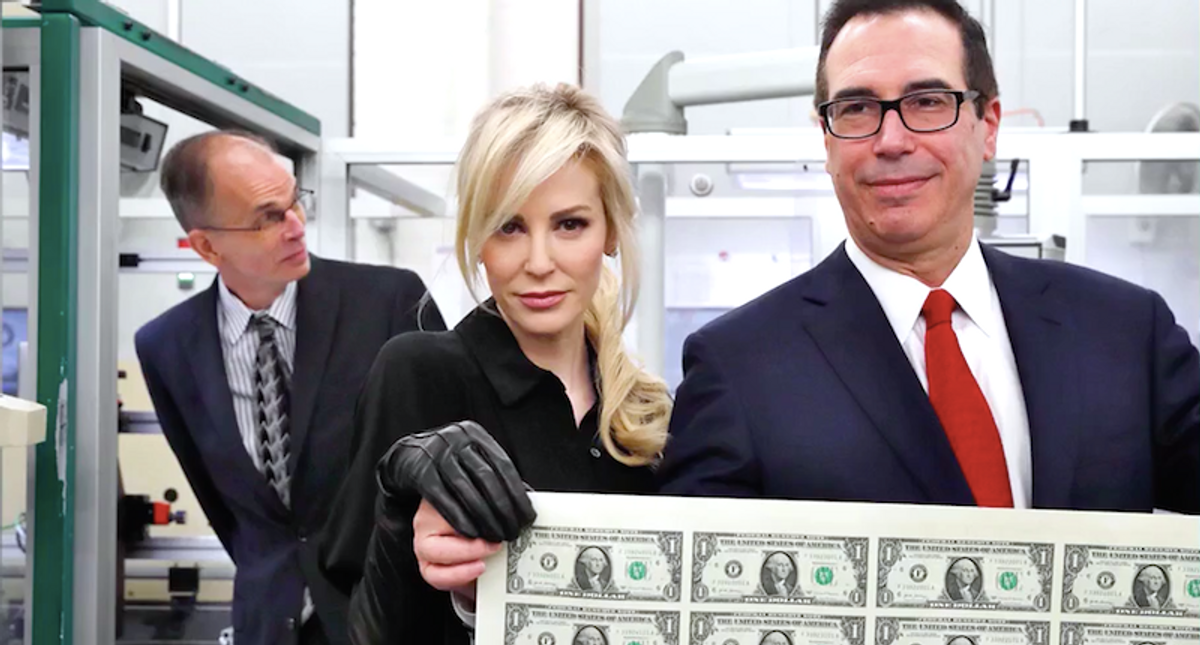 The trailer for Louise Linton's new movie "Me You Madness" dropped on Thursday, and well, it's a lot.

I'm here to offer a description of a film that, while real, feels more like an insane game of GOP-adjacent "Mad Libs." "Me You Madness" stars Linton, the wife of former Secretary of the Treasury Steven Mnuchin, as a sociopathic bisexual woman who, per IMDB, "hunts down and kills men with crossbows, martini glasses, and kitchen knives in order to eat them."

Catherine Black (Linton) is a 1980s Malibu hedge fund manager who is addicted to fashion, money and sex. "You may think that I'm a materialistic, narcissistic, self-absorbed misanthrope," Black muses in a voiceover in the trailer below. "I don't deny it."

Her life is an endless parade of stacks of cash, spin classes and metallic boots — that is until Tyler, played by infamous "Gossip Girl" star Ed Westwick, answers her ad for a roommate. Tyler, a petty criminal, thinks he's struck gold when he rolls up to her beachside mansion; Catherine thinks she's found her next meal. It's a love story for the modern ages (made all the weirder by the recent allegations that actor Armie Hammer allegedly identifies as "100% a cannibal").

Linton is not primarily known as an actress, though she's had several small roles in low-budget horror movies and on shows like "CSI: NY"; she did, however, write, direct and finance "Me You Madness" through her production company Stormchaser Films.

Rather, she rose to a certain level of infamy in 2017 when she Instagrammed a photo of herself and Mnuchin disembarking a military jet following a trip to Fort Knox. She added hashtags that nodded to her designer apparel #rolandmouret, #hermesscarf, #tomford and #valentino. A woman responded with the comment, "Glad we could pay for your little getaway. #deplorable," which incensed Linton.

"Aw!!! Did you think this was a personal trip?! Adorable!" Linton responded. "Do you think the US govt paid for our honeymoon or personal travel?! Lololol. Have you given more to the economy than me and my husband? Either as an individual earner in taxes OR in self sacrifice to your country?"

Me You Madness - OFFICIAL TRAILERwww.youtube.com

Three months later, Linton accompanied her husband to the Bureau of Engraving and Printing in Washington. Someone took a photo of her holding up a sheet of freshly printed dollar bills while wearing elbow-length black leather gloves. The image went viral — as did the frequent comparisons to Cruella de Vil — and cemented her status as a real-life cartoon villain.

With that in mind, perhaps Linton's lines in the trailer that detail her obsession with "the accumulation of money" are a self-aware nod to the public's perception of her? Perhaps. In interviews, Linton has expressed that the movie is an attempt to subvert the femme fatale steretotype, with a little "American Psycho" thrown in for good measure.

But according to the New York Times, the weirdest parts of the camp-fest aren't revealed in the trailer.