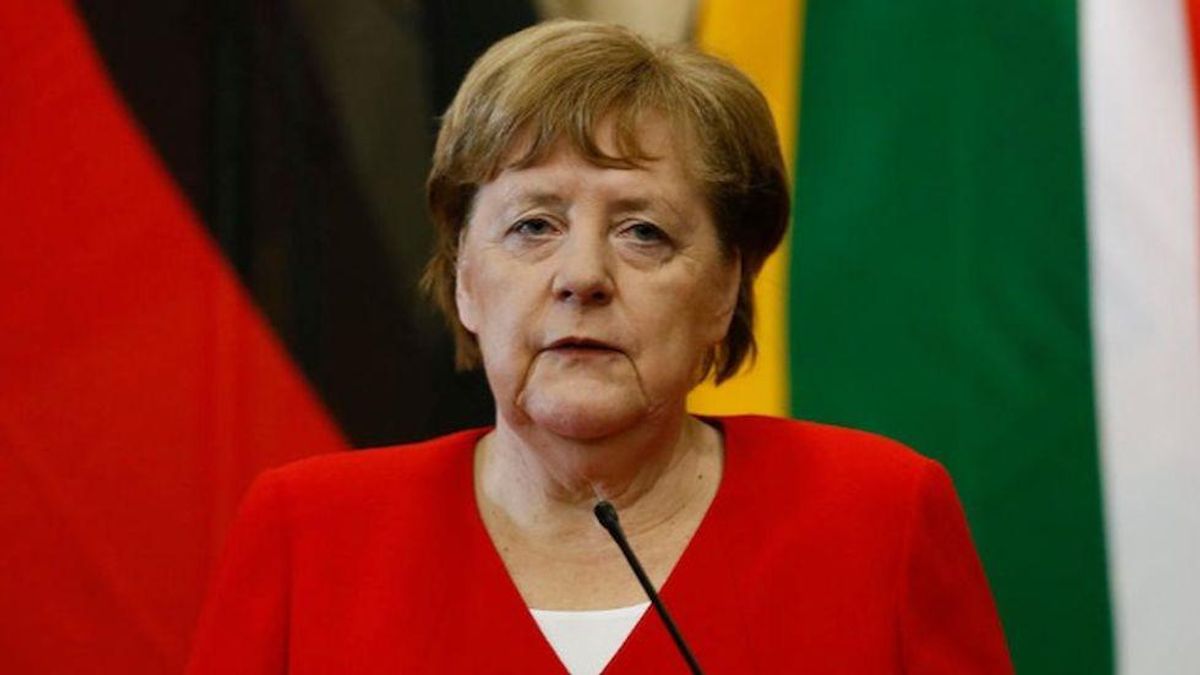 Ahead of German Chancellor Angela Merkel's visit to the U.S. later this week, public health campaigners on Tuesday floated a large banner in front of the White House calling on the European leader to "stop blocking global Covid vaccines," a reference to her continued opposition to suspending Big Pharma-friendly patent protections.

"The Merkel-Biden summit will not be a success unless Germany agrees to support the TRIPS waiver and help end the pandemic."
—Arthur Stamoulis, Citizens Trade Campaign

Organized by a coalition of U.S. civil society groups, Tuesday's demonstration was the first in a series of actions set to take place ahead of and during Merkel's July 15 meeting with President Joe Biden, who has faced criticism for not doing enough to pressure European allies to support a proposed patent waiver for coronavirus vaccines.

Other actions planned this week include a protest at Germany's Permanent Mission to the United Nations in New York City on Wednesday, a "die-in" outside the White House during Merkel's visit on Thursday, and vigils at German consulates nationwide.

"While Americans and Western Europeans increasingly have widespread access to Covid vaccination, huge numbers of people around the world aren't expected to have access to a vaccine for years unless global production is dramatically increased," Arthur Stamoulis, executive director of the Citizens Trade Campaign, said in a statement. "Every day Chancellor Merkel delays global action on Covid vaccines costs thousands of lives and increases the chances of a viral mutation that can evade current vaccines and start the pandemic all over for everyone."

"The Merkel-Biden summit will not be a success," Stamoulis added, "unless Germany agrees to support the TRIPS waiver and help end the pandemic."

In a letter to Biden last week, Public Citizen, Amnesty International, and other progressive advocacy groups characterized the July 15 meeting as "a unique opportunity" for Biden to "lead the world to the speedy adoption of a waiver by persuading Chancellor Merkel to join you and end her opposition."

"The rising Delta variant makes brutally clear that the world is not winning the battles between vaccines and variants, or between treatments and needless deaths, or between tests and raging outbreaks," the letter warns.

Since Biden endorsed the patent waiver in May, negotiations over the proposal have largely been stagnant as Germany, the United Kingdom, Canada, and a handful of other rich World Trade Organization (WTO) members remain opposed.

Because the WTO operates by consensus, the small group of wealthy countries has the power to block a proposal backed by the majority of the organization's member countries as well as hundreds of international humanitarian groups, the head of the World Health Organization, the European Parliament, and a growing number of U.S. members of Congress.

Just days after Biden announced his support for the waiver, Merkel blamed "production capacities and the high-quality standards" of coronavirus vaccines for supply shortages, dismissing the role that strict intellectual property (IP) protections have played in constraining global production.

Asked during a press briefing last week whether Biden intends to discuss the patent waiver with Merkel on Thursday, White House Press Secretary Jen Psaki dodged the question and described the waiver as just "one tool in our toolbox."

"There are a number of others, including increasing manufacturing," said Psaki. "Obviously, we've already made an announcement about the number of doses—the 500 million we're sharing around the world—and we've already started implementing them."

But public health experts have argued that vaccine charity, while welcome, will do nothing to address a major underlying cause of supply scarcity—the pharmaceutical industry's monopolistic control over production and key technology.

"We acknowledge that legal factors beyond IP, such as trade and export restrictions, also shape the ability to produce and access Covid-19 vaccines and therapeutics," more than 100 international intellectual property scholars wrote in an open letter on Tuesday. "Nonetheless, it is the case that IP rights, and monopolies over tacit and informal information, are also implicated in the current lack of global capacity for vaccine production and other health technologies, as well as in enabling their inequitable distribution."

A temporary waiver of vaccine-related patent protections, the academics argued, "is a necessary and proportionate legal measure towards the clearing of existing intellectual property barriers to scaling up of production of Covid-19 health technologies in a direct, consistent, and effective fashion."

The World Health Organization estimates that the equitable distribution of 11 billion vaccine doses will be necessary to end the pandemic. According to Our World in Data, just over 3.4 billion doses have been administered thus far—a mere 1% of which have gone to people in low-income countries.

"With thousands of people continuing to die of Covid every day for lack of vaccines and treatments, the idea that Germany would continue to prioritize pharmaceutical profits over saving as many lives as possible and ending this pandemic is an outrage," Stamoulis said. "Now is the time for real leadership."