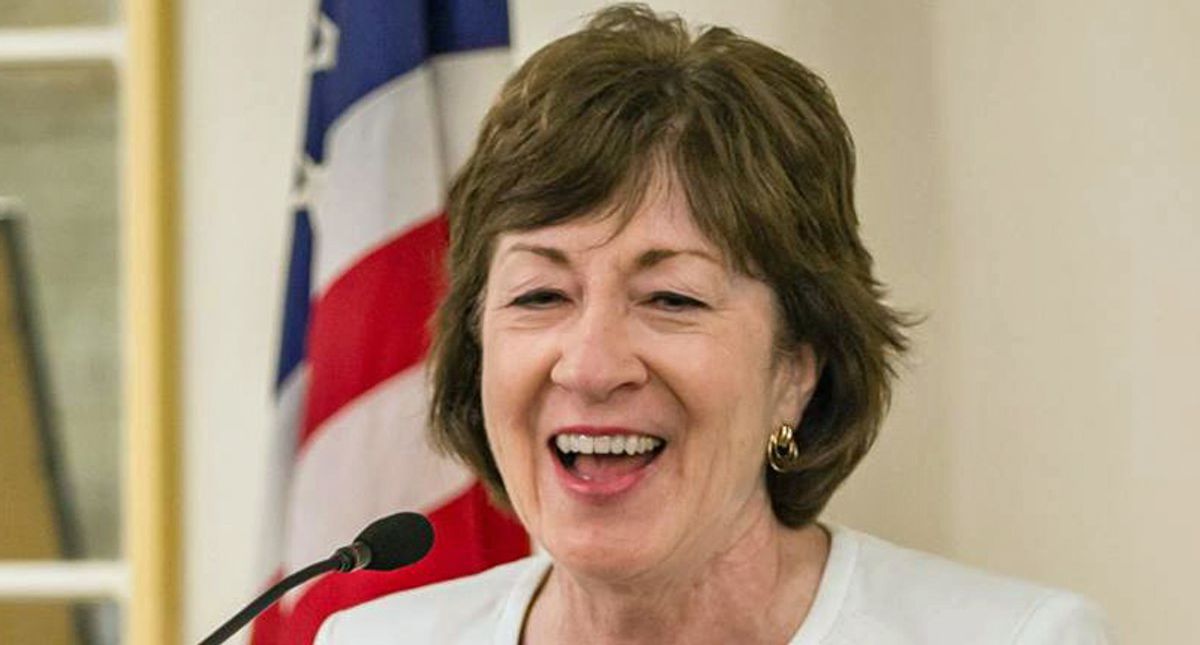 The Equality Act is being voted on in the House this week, a landmark bill that would add LGBTQ people to the 1964 Civil Rights Act and bring protections to millions who live in the majority of states without protections in housing, employment, public accommodations and other spheres of life. It's more vital than ever because Republicans in state legislatures around the country are pushing dozens of anti-LGBTQ bills as Trumpism and its devotion to religious extremists further grips the GOP.

Senator Susan Collins was the only Republican co-sponsor of the Equality Act when it passed in the House in 2019, but she suddenly said this week that she will not co-sponsor the current bill.

What has changed between now and then?

One important thing that changed is that the bill actually has a shot of being passed, as it will certainly get a vote in the Senate after passing the House, and there's a president who will sign it. And the other is that the largest LGBTQ rights group, the Human Rights Campaign, a long-time supporter of Collins, had supported her opponent in the 2020 election, citing her embrace of Trump as he pursued an anti-LGBTQ agenda. That angered Collins, who called it "partisan politics" (and then accepted the endorsement of an anti-LGBTQ group).

Of course, a true believer in equality of the millions of LGBTQ people across the country wouldn't let something like an endorsement by one group affect her judgement, right? And surely, since the bill will certainly get a vote in the Senate, with Democrats in control of the chamber but in definite need of Republican votes to break a filibuster, you'd think a supporter of civil rights would be ready to sign aboard immediately, right?

But Collins' refusal to sign on reveals the fraud that she is. She never cared about passing the Equality Act, and only cared about posing as a moderate to win re-election — a tried and true strategy of hers, which the media continually enables and promotes. She'd been further exposed as a hard-right zealot committed to Mitch McConnell 's agenda after the Brett Kavanaugh hearings and her vote to confirm him to the Supreme Court, and needed some cover.

Supporting the Equality Act was an easy position for Collins to take in 2019 since the Equality Act had no chance of actually passing and thwarting Trump's and the GOP's agenda. McConnell let it go to his graveyard of bills, refusing to give it a vote. And Trump had said he'd never sign it, bowing to religious conservatives. Collins was in the fight of her life battling for her Senate seat against Democrat Susan Gideon and progressives determined to take her down for her complicity in Trump's agenda.

So there she was, not only co-sponsoring the bill but engaging in political theater, telling McConnell with a wink and a nudge to pass a bill — "Congress should also pass the Equality Act & amend the Civil Rights Act," Collins tweeted after the Supreme Court handed down a victory for employment protections in June of 2020. But she knew she'd never have to vote on the bill, thus using LGBTQ people as political pawns.

Now that Joe Biden has promised to get it passed in his first 100 days and McConnell is hellbent on stopping Biden from achieving his agenda, Collins is suddenly vaguely talking about revisions she was promised to the bill that are keeping her from signing on.

But it's the same bill it was in 2019, which she co-sponsored, supported profusely and didn't express any reservations about. In a comment to the Washington Blade this week she hinted at her anger with the Human Rights Campaign:

The Maine Republican said changes she had sought, but didn't immediately specify, weren't made to the Equality Act when she was the lone Republican to co-sponsor the legislation in the previous Congress.
"There were certain provisions of the Equality Act which needed revision," Collins said.
Throwing some veiled criticism at the Human Rights Campaign, which declined to endorse her in 2020 as it had done in previous elections, Collins added, "Unfortunately the commitments that were made to me were not [given] last year."

@ASFried Susan Collins professed to be an enthusiastic supporter of the Equality Act less than a year ago. She didn… https://t.co/Ux9NJFEYBk
— Collins Watch (@Collins Watch)1614130348.0

Collins thought she could play the same game in 2020 with the Equality Act to get that endorsement again, but it didn't work. She'd spent the Trump years harming LGBTQ people, and it was too much to overlook.Collins has posed as a supporter of LGBTQ rights for many years, using the lives of queer people to make her seem moderate. She supported federal bills like the Employment Non-Discrimination Act when they had no chance of passing. She refused to come out in favor of marriage equality and support an initiative in her state that legalized it in Maine in 2012 — staying "neutral" on the initiative while bigots spewed hate — but then came out in support of marriage equality in 2014, long after many other politicians and long after she was needed, to gain the endorsement of the Human Rights Campaign for her Senate race that year, which she got.

Collins voted for dozens of anti-LGBTQ and anti-choice federal judges nominated by Trump. That includes Kyle Duncan, confirmed to the Fifth Circuit Court of Appeals, who wrote the amicus brief for Louisiana and 14 other states to uphold same-sex marriage bans and fought to uphold transgender bathroom restrictions. It includes backing Steve Grasz for the Eighth Circuit Court of Appeals, who received a unanimous "unqualified" rating from the American Bar Association. He'd called Roe v. Wade "moral bankruptcy" and sat on the board of a group that promotes "conversion therapy" for LGBTQ minors.

Even going back to 2010, when Collins was one of the few Republicans who co-sponsored repeal of "don't ask, don't tell," she was really banking on a vote on repeal never happening and thus not messing with the GOP agenda — which is her first priority. When activists shifted the playing field and got President Obama to seriously get behind DADT repeal bill and follow through on his promise to end DADT, Collins revealed a glimpse of that, joining a filibuster blocking repealing of DADT, saying that the way Democrats were going about it was "unfair" even as she had championed repeal:

"It's the right thing to do. I think it's only fair" to repeal don't ask, don't tell, said Senator Collins in a floor speech Tuesday. "But I cannot vote to proceed to this bill under a situation that's going to shut down the debate and preclude Republican amendments. That, too, is not fair.

Collins and the GOP were eventually outmaneuvered in the back and forth in the Senate, however; the curtain was pulled back and Collins had no choice but to vote for repeal or look completely fraudulent.

Which is how she looks right now. But with Mitt Romney, a long-time foe of LGBTQ rights and marriage equality who recently expressed transphobic beliefs, announcing he is opposed to the Equality Act, and Collins not on board, it makes the path to victory much clearer: The filibuster must be ended or reformed if we're to make this landmark civil rights bill into law.

And that brings us back to Democrats in the Senate, who, with 51 votes, can get the Equality Act passed, and Senator Kyrsten Sinema, one of only two LGBTQ members of the Senate, and someone who has said she is opposed to ending the filibuster.

I wrote about that last week, and the terrible legacy Sinema would have, standing up for the filibuster, a relic of the Jim Crow era, while blocking civil rights for her own people. Sinema — and any other Democrat expressing reservations about the filibuster — has the chance to be a hero of equality.

Otherwise, her legacy will be similar to that of Susan Collins, a duplicitous conniver who posed as a civil rights supporter, but who only fulfilled the agenda of McConnell, Trump and the anti-democratic, bigoted GOP.