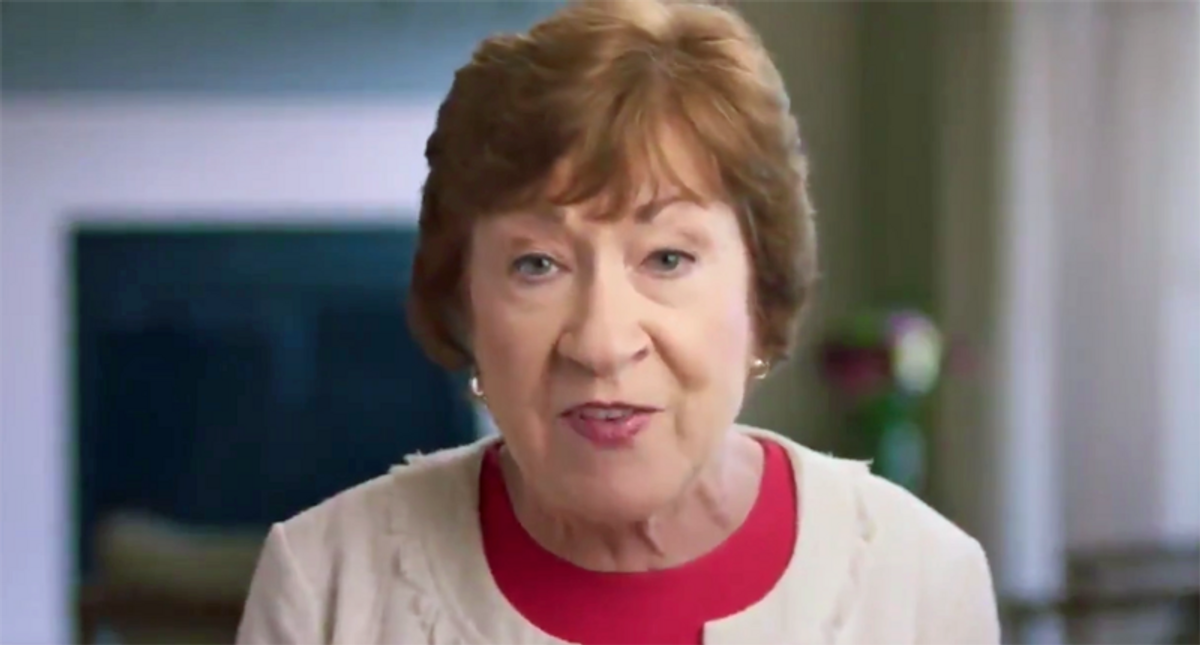 Senators Susan Collins, R-ME, and Tim Kaine, D-VA, are privately floating the idea of censuring Trump as the chances of a post-impeachment conviction grow slimmer without substantial Republican support, according to Axios.

On Tuesday, forty-five Senate Republicans voted against holding a trial for Trump's impeachment, dismissing the trial as "unconstitutional." While the 45-55 split will allow the trial to move forward, such a critical mass of Republican opposition does not bode well for a proper conviction, which would require a two-thirds majority in the Senate. A least seventeen more Senate Republicans will be needed to convict.

"I think it's pretty obvious from the vote...that it is extraordinarily unlikely that the president will be convicted," Collins said following the vote, "Just do the math."

The Maine Republican who spent nearly the entirety of Trump's term in a perpetual state of disappointment seems to hold more animosity for her new Senate Leader, Chuck Schumer, D-NY.

"What this campaign taught me about Chuck Schumer is that he will say or do anything in order to win," Collins recently told CNN. "It was a deceitful, despicable campaign that he ran."

Sen. John Boozman, R-AR, joined Collins' pessimism that Republicans could possibly hold a former president accountable for inciting an insurrection. "I can't see how you get 17," said Boozman, "I think that that was a test vote."

Now, Senators Collins and Kaine reportedly have their eyes set on a censure, which would require a 60-vote margin in the upper chamber. Unlike an impeachment trial, a censure cannot be challenged as unconstitutional, closing the escape hatch used by Senate Republicans to condemn the trial on procedural grounds without having to address Trump's problematic conduct leading up to the Capitol riot. A censure would be a symbolic denunciation of the former President's actions, which several Republicans have already acknowledged as completely unacceptable.

In fact, a small coterie of House Republicans led by Rep. Brian Fitzpatrick, R-PA, introduced a censure earlier this month, calling Trump's "attempts to undermine the outcome of the 2020 election…unconscionable." Those backing the effort included Reps. Young Kim, R-CA, John Curtis, R-UT, Peter Meijer, R-MI, Tom Reed, R-NY, and Fred Upton, R-MI. At the time, however, House Democrats shut down the Republican-backed censure, deriding it as a lukewarm attempt to hold the President accountable.

Despite the lack of support needed in the Senate, Senate Majority Leader Chuck Schumer, D-NY, has vowed to nevertheless hold a proper impeachment trial, tabling a point order by Senator Rand Paul, R-KY, a vocal objector to the trial.

"I would simply say to all of my colleagues," Schumer declared, "There will be a trial, and the evidence against the former president will be presented in living color for the nation and every one of us to see once again."

Schumer faces challenges from both sides of the aisle as questions over the filibuster loom large with a 50-50 Senate split. Even with Schumer and Senate Minority Leader Mitch McConnell's, R-KY, power-sharing agreement –– which seeks to circumvent procedural impasses in committee organizing –– the debate surrounding the filibuster is far from over.

Progressive Democrats see the filibuster as an outdated holdover that Republicans have historically used to undermine legislative progress, posing Congressional obstacles for a Biden presidency. As Rep. Alexandria Ocasio-Cortez, D-NY, tweeted last September, "The filibuster wasn't made w/ purpose. It's the result of an accident in rulebook revision & bloomed as a cherished tool of segregationists," adding, "Now it empowers minority rule. That's not "special," it's unjust." Sen. Elizabeth Warren has likewise expressed a strong interest in killing the filibuster.

More centrist Democrats are, however, less enthused with the idea of eliminating the procedural relic. Senators Joe Manchin, D-WV, and Kyrsten Sinema, D-AZ, are holding out hope for bipartisan cooperation. "Busting the filibuster under any conditions is wrong," said Sen. Manchin, "We can organize the Senate. I'm sure we can work through that.

Meanwhile, Schumer –– a Democratic centrist who has a reputation as a "consensus builder, not a dictator," –– is still trusted by many of his GOP colleagues to live by this reputation with respect to the filibuster. Sen. Lindsey Graham called Schumer "capable, smart, hard-working, tenacious." Graham told CNN, "I've found him to be honest [...] He's got a problem. He's the majority leader with a primary challenge looming over his shoulder."

With pressure on both sides of the aisle, Schumer will play a consequential role in determining the fate of the filibuster. Hopefully, Sen. McConnell, who did away with a 60-vote threshold to confirm President Trump's three conservative Supreme Court nominees, is poised to get a taste of his own medicine.