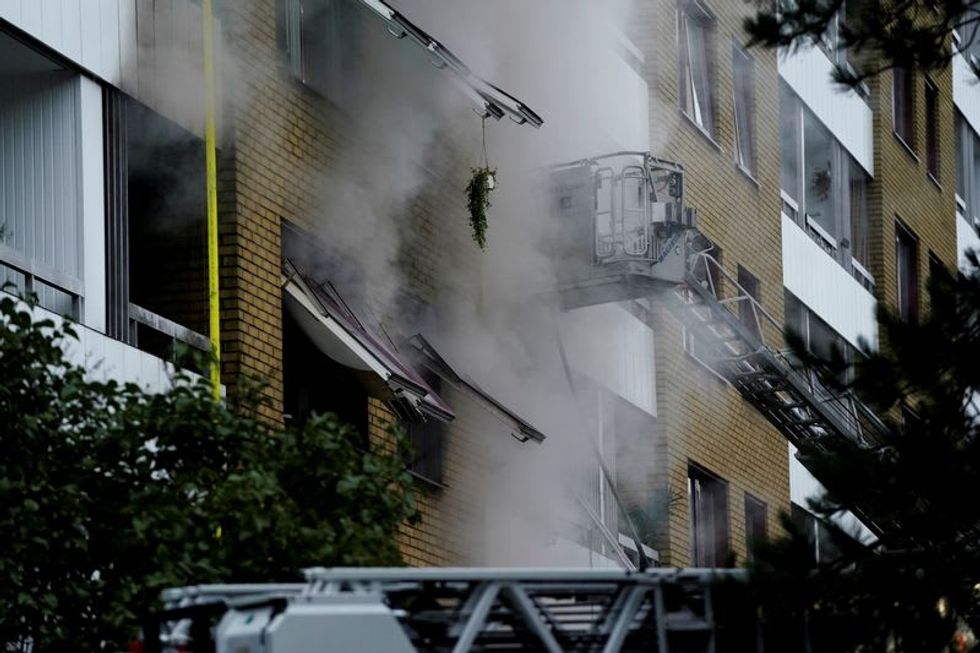 By Johan Ahlander and Helena Soderpalm

GOTHENBURG, Sweden (Reuters) - Four people were seriously hurt in an explosion and fire on Tuesday in the Swedish city of Gothenburg and police are investigating whether an explosive device was placed at the scene.

At least 16 people were taken to hospital after the early morning blast set ablaze an apartment bloc in a central residential area. Fire fighters pulled people from the building while others used tied sheets to lower themselves from balconies as grey smoke billowed out of stairwells and windows.

Three women and one man were treated for serious injuries, a Sahlgrenska University Hospital spokesperson said. Swedish public services radio SR reported that about 25 people had been taken to hospitals around Sweden's second largest city.

The Nordic country has contended with surging gang crime in recent years, with rival groups employing explosives and fire arms to settle scores.

"It's terrible," Interior Minister Mikael Damberg told TT news agency. "I have great confidence in the Police Authority and that it uses all the resources required to sort out what has happened."

Police, who opened an investigation, said the fire was under control and that tenants had been evacuated. Emergency services ruled out a gas leak as the cause.

"We believe something has exploded that is not of natural causes," Police spokesperson Thomas Fuxborg told a news conference, adding that something had "probably" been placed at the site of the explosion.

Emergency services said they were working to put out fires in the apartment building. They refrained from speculating on the cause of the explosion.

Anja Almen, who lives in the building, said she heard a commotion from the street just after 5:00 a.m. -- around 15 minutes after the explosion.

"I went out on the balcony and I was shocked. There was smoke everywhere, from every stairwell," she said by phone from a nearby church to which she and other tenants were evacuated. "Fire trucks with ladders were pulling people from apartments."