Taliban capture Afghanistan's Kandahar as embassies get staff out 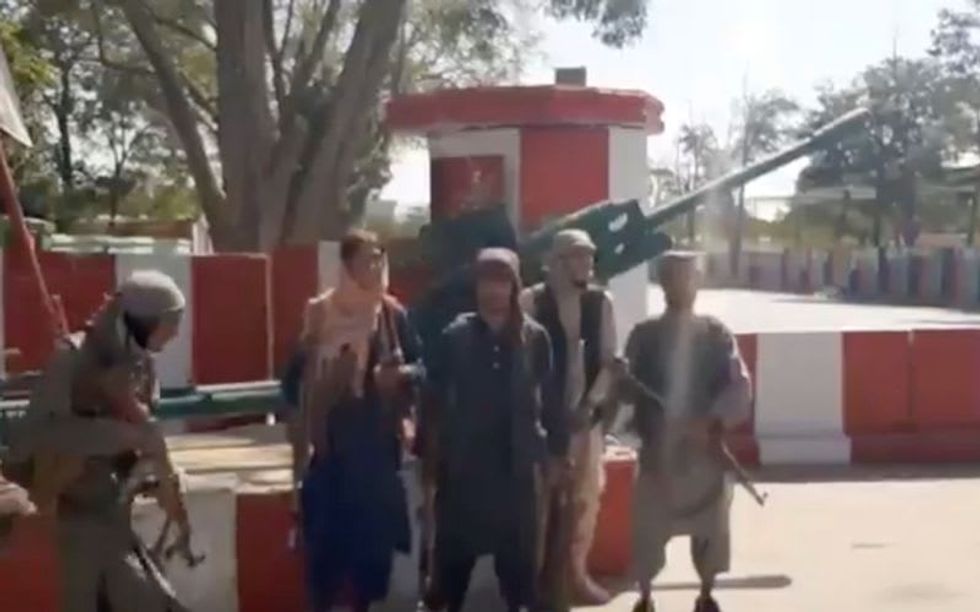 KABUL (Reuters) -The Taliban have captured Afghanistan's second biggest city of Kandahar, officials said on Friday, the biggest setback for the U.S.-backed government since the insurgents launched a new offensive as U.S. forces withdraw.

The Taliban also said https://tmsnrt.rs/3jGaX8M they had captured the third-largest city of Herat in the west, Lashkar Gah in the south and Qala-e-Naw in the northwest.

With phone lines down across much of the country, Reuters was unable to immediately contact government officials to confirm which of those three cities under attack remained in government hands.

Kandahar is the heartland of the Taliban, ethnic Pashtun fighters who emerged in the province in 1994 amid the chaos of civil war to sweep through most of the rest of the country over the next two years.

"Following heavy clashes late last night the Taliban took control of Kandahar city," a government official told Reuters after the militants announced they had taken it.

Government forces were still in control of Kandahar's airport, which was the U.S. military's second biggest base in Afghanistan during their 20-year mission.

The fall of major cities was a sign that Afghans welcomed the Taliban, a spokesperson for the group said, according to Al Jazeera TV.

In response to the Taliban's swift and violent advances https://graphics.reuters.com/AFGHANISTAN-CONFLICT/FLASHPOINTS/lbpgnrazjvq/index.html, the Pentagon said it would send about 3,000 extra troops https://www.reuters.com/world/asia-pacific/exclusive-us-evacuate-significant-number-employees-embassy-kabul-officials-2021-08-12 within 48 hours to help evacuate U.S. embassy staff.

Britain said it would deploy around 600 troops https://www.reuters.com/world/asia-pacific/britain-sends-troops-afghanistan-help-evacuate-staff-citizens-2021-08-12 to help its citizens leave while other embassies and aid groups said they too were getting their people out.

"It's best to reduce our foot-print not just because there's an increasing threat of violence but also resources," an official at the Turkish embassy in Kabul said on Friday.

"Medical facilities are under massive pressure. We also are mindful of COVID-19 and testing has almost come to a pause."

The speed of the offensive has sparked recriminations among many Afghans over President Joe Biden's decision to withdraw U.S. troops, 20 years after they ousted the Taliban in the wake of the Sept. 11 attacks on the United States.

Biden said this week he did not regret his decision, noting Washington has spent more than $1 trillion in America's longest war and lost thousands of troops.

The U.S. State Department said Secretary of State Antony Blinken and Defense Secretary Lloyd Austin spoke to President Ashraf Ghani on Thursday and told him the United States "remains invested in the security and stability of Afghanistan". They also said the United States was committed to supporting a political solution.

The Taliban had until recent days focussed their offensive on the north, a region they never fully controlled during their rule and the heartland of Northern Alliance forces who marched into Kabul with U.S. support in 2001.

The government still holds the main city in the north - Mazar-i-Sharif - and Jalalabad, near the Pakistani border in the east, as well as Kabul.

On Wednesday, a U.S. defence official cited U.S. intelligence as saying the Taliban could isolate Kabul in 30 days and possibly take it within 90.

The United Nations has warned that a Taliban offensive reaching the capital would have a "catastrophic impact on civilians" but there is little hope for negotiations to end the fighting with the Taliban apparently set on a military victory.

In the deal withdrawal struck with former U.S. President Donald Trump's administration last year, the insurgents agreed not to attack U.S.-led foreign forces as they withdrew.

They also made a commitment to discuss peace but intermittent meetings with government representatives have proved fruitless. International envoys to Afghan negotiations in Qatar called for an accelerated peace process as a "matter of great urgency" and for a halt to attacks on cities.

A Taliban spokesman told Al Jazeera: "We will not close the door to the political track."

Pakistani Prime Minister Imran Khan said this week the Taliban had refused to negotiate unless Ghani resigned. Many people on both sides would view that as tantamount to the government's surrender, leaving little to discuss but terms.

Pakistan officially denies backing the Taliban but it has been an open secret that Taliban leaders live in Pakistan and recruit fighters from a network of religious schools in Pakistan.

Pakistan's military has long seen the Taliban as the best option to block the influence of arch rival India in Afghanistan and to neutralise Pashtun nationalism on both sides of a border that Afghanistan has never recognised.

Afghans, including many who have come of age enjoying freedoms since the Taliban were ousted, have vented their anger on social media, tagging posts #sanctionpakistan, but there has been little criticism from Western capitals of Pakistan's role.

The U.N. Security Council was discussing a draft statement https://www.reuters.com/world/asia-pacific/un-security-council-discussing-condemnation-taliban-2021-08-13 that would condemn the Taliban attacks, threaten sanctions, and affirm the non-recognition of an Islamic Emirate of Afghanistan, diplomats said.

Exclusive: 'Hillbilly spoof': How the same gang that pushed the 'Big Lie' in 2020 worked together on the 2019 Kentucky election